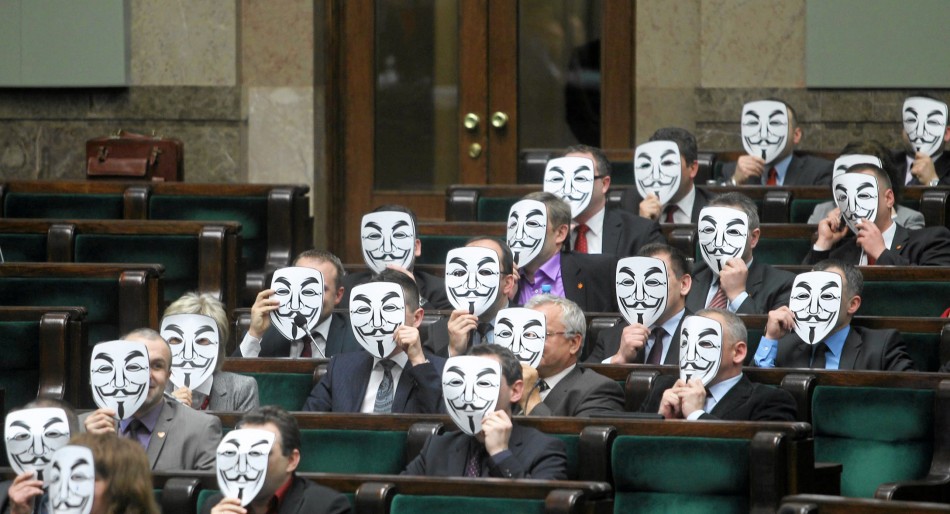 Instead of a video, I would like to discuss a single image, taken almost exactly two years ago by a Reuters photographer, and published in an International Business Times article. It depicts members of the Polish Parliament donning Guy Fawkes masks in the midst of proceedings, to protest the ratification of ACTA, an international trade accord that had already been signed by the Polish prime minisher Donald Tusk.

This image hit the blogosphere while I was in the middle of writing a book called The Piracy Crusade, and for me it perfectly encapsulates the passion, the pageantry, and the absurdity of today's global infopolitical landscape. It also demonstrates the extent to which our current battles over the flow (and obstruction) of networked information require us to reassess our traditional understanding of political parties, platforms and alliances.

To begin with, the fact that the counterhegemonic hacker collective Anonymous has adopted a trademarked, royalty-bearing logo owned by Time Warner as its semi-official mascot is either an audatious act of reappropriation or a bizarre tacit acknowledgment of the inevitable centrality of commercial culture in contemporary society. Or maybe both.

More germane to this particular image, and to this week's theme, it's inconceivable that Polish parliamentarians would have voluntarily donned the masks only three days after Anonymous claimed credit for taking down the Polish government's website and other affiliated sites. This is only slightly less surprising than if American congresspeople had donned Bin Ladin masks on September 14, 2001. Even more incredibly, the protest succeeded -- the following day, Tusk announced he was suspending ACTA's ratification indefinitely, which proved to be the turning point for resistance against the treaty. Ultimately, though the treaty had 32 signatories, it was only ratified in one country -- rendering it effectively dead.

What explains this reversal, and what does it tell us about the continuing battles over international IP law and current impending disasters, such as TPP? I propose that the strange bedfellow-ness of it all underscores the delta between the rhetoric and the reality of IP laws and treaties such as these. The piracy crusaders would have us believe they support free speech and free markets, when in fact, as I argue in my book, their naked funciton is to extend American hegemony at the cost of sovereignty and civil liberties around the globe.