CAPTAIN: Whether you sell off organs from the dead or devour them, I don’t give a damn. However, you’ve ruined the most crucial element of this place. Equality. Everyone is equal in these games. Players compete in a fair game under the same conditions. These people suffered from inequality and discrimination out in the world, and we offer them one last chance to fight on equal footing and win. But you have broken that principle.

In episode 5 of Squid Game, “A Fair World,” the Captain has discovered that some of the staff have been helping a contestant succeed in the game by giving him clues in return for his labors in harvesting organs from deceased contestants to be sold on the black market. The Captain’s commentary after discovering this operation may surprise the viewer as he explains what he finds reprehensible: the “most crucial element of this place” is “[e]quality,” and these staff members have undermined the integrity of the game.

The captain’s argument here bears striking similarity to McKenzie Wark’s Gamer Theory: “The Cave presents games in a pure state, as a realm where justice—of a sort—reigns.” Unlike the real world (or, in Wark’s terms, “gamespace”), where “the dice are loaded, the deck stacked, the table rigged and the fix—in,” games offer justice and achievement, or at least high scores. Squid Game imagines a new stake for familiar games, a last chance to end one’s financial woes: become rich or die trying. Like Wark, the Captain is acutely aware that what we collectively lack in gamespace is real, honest fairness. Gamespace eats us up and spits us out as almost all of us toil against a rigged system that we don’t even have a 1/456 chance of winning (whatever “winning” might mean). The games of Squid Game offer what the captain describes as “equal footing” in the same way that Roger Caillois discusses games of “agon” and “alea” in their purest state. An uncompromising commitment to a level playing field is what distinguishes the games from gamespace, and once that is undermined, the Captain apologizes to the contestants for such a grievous lapse. (Notably, he does not apologize for the contestants’ gruesome deaths before or since.)

This unwaivering adherence to baseline equality lies at the heart of Squid Game and commands our attention as viewers who feel hapless within the gamespace of our contemporary moment. Squid Game’s brutal logic of equality demands us to reflect on the no less brutal circumstances of the real. 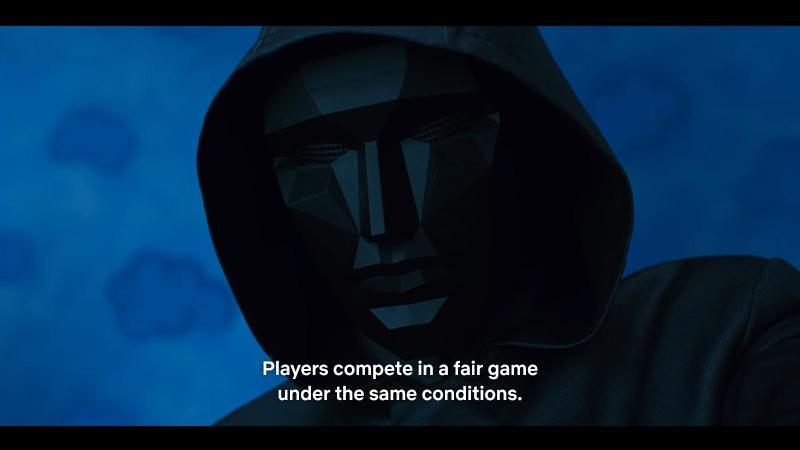