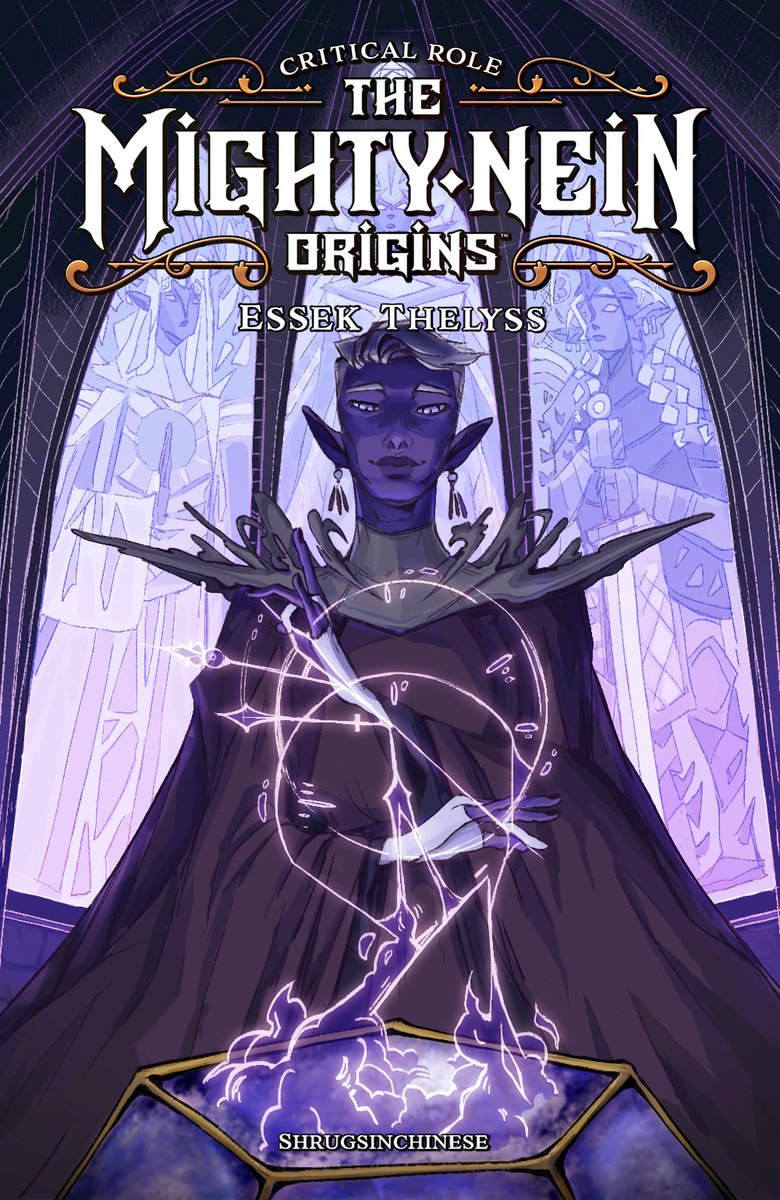 With this stunning piece of fanart, Shrugs draws from Critical Role fandom iconography – or, “a small pool of recognizable visual elements that fan artists then use to indicate the image’s subject matter or a specific reading” (Nielsen 277) – regarding a beloved non-player character (NPC), the drow wizard and political figure Essek Thelyss. Unlike the player characters (PCs) of Critical Role, who are given “official” representations through art commissioned as overlays for the show, NPCs such as Essek are rarely visualized in this way, but instead, described briefly and infrequently. This means representations of such NPCs must become at least partly interpretive instead of mimetic, and fans thus “adopt or develop” (Nielsen 277) recognizable visuals for favorite characters, making fanart “a genre [that is] generally designed to be read” (Nielsen 274) by knowledgeable viewers.

The first time audiences meet him in Critical Role, Essek is described as “Very handsome, head held high,” wearing a high mantle and dark robes that “completely obfuscate” his body ("In Love and War,” 17:17) and with “very short, white hair that comes to this beautiful half-curved coif to one side” ("In Love and War,” 47:56). Out of game, Mercer has also said that he “always imagined” Essek’s eyes “a violet or violet-blue color” (Mercer), and the cast soon took to calling him “Hot Boi” (“The King's Cage,” 4:07:54). From here, this character's iconography in Critical Role fanart has come to include the short hair, striking eyes, and dark, high-collared mantle from Mercer’s brief descriptions; in addition, as a form of “visual fanon” (Nielsen 284), it also tends to depict Essek with ear jewelry of some kind and some illustration of either his particular school of magic (dunamancy, which affects time, matter, and gravity) or his relationship with the Mighty Nein (whether as a guardian, a teacher, or a late-blooming friend).

Shrugs’ artwork of Essek makes a particular statement by combining this iconography with the visual markers of the comic book series Mighty Nein Origins, currently being released through Dark Horse Comics. That is, what fans are expected to “recognize and understand” (Nielsen 274) from this particular piece of artwork is the idea that Essek’s backstory will be revealed and further explored (Farber).

While savvy fans can absorb this impression at a glance, thanks to Shrugs’ use of the distinctive Origins lettering and series title, the artwork itself is also an amalgamation of details that can be “read” as hints of what Essek’s backstory might cover. Certain details are iconographic and pertain to Essek specifically, such as the dark robes, high mantle, short hair, ear jewelry, and representation of dunamancy magic in the form of a wispy purple timepiece: likewise, these details identify Essek immediately, even if viewers miss the small font spelling out his name.

Other details are not fully iconographic, but can still be read as references to what little is already known of Essek’s backstory. For instance, this Essek is facing a twelve-sided object with gold edges, from which he is drawing that magical timepiece: this will be recognizable to fan-viewers as a partially-dismantled “beacon" -- a magical object Essek is fascinated with -- and its appearance here recollects official art such as found on the cover of Explorer’s Guide to Wildemount. Also, in facing this beacon, Essek has his back turned to a set of stained-glass windows, which suggest the power and religious connotations of the drow dynasty he supposedly serves. Set against these windows, Essek makes for a dramatic silhouette, but he has also quite literally turned his back on something of his people and their beliefs. Shrugs’ inclusion of such details thus plays with the idea that an Essek-focused Origins story would delve into certain events of this character's life before he met the Mighty Nein.

Shrugs’ inclusion of a Bitly link in their caption is another clever reference, playing on fan-viewers’ expectations for a preorder page. This shortened link, however, directs viewers to the popular “Essek Supercut 1,” a three-hour fan-created video collecting this character’s appearances from the first 18 episodes after his introduction. So fans could obtain more information on Essek's backstory here, but that would come from a fan collation of existing material, not new material in an adaptation.

Shrugs’ fanart thus demonstrates how fandom iconography can be expanded and recombined to create additional layers of meaning that draw on fans’ knowledge and appreciation of under-depicted characters.