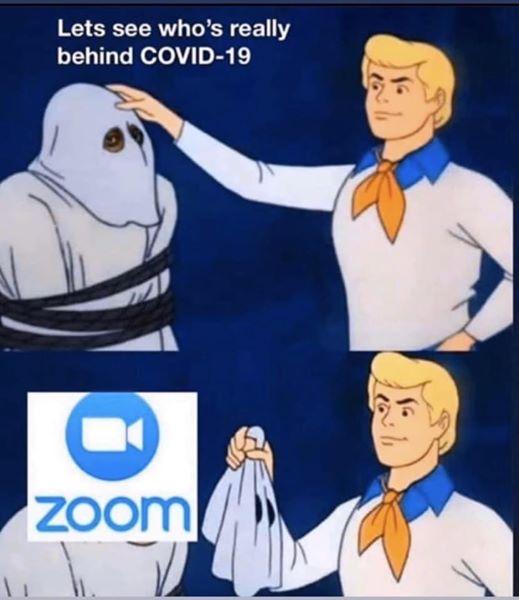 The current pandemic has not produced much levity, but we both laughed maniacally at this meme based on Hanna-Barbera’s cartoon Scooby-Doo (1969-70, U.S.)—each episode of which concludes with a “ghost” unmasked as a real person in costume.  The meme distills Naomi Klein’s concept of “disaster capitalism,” in which “[d]isasters [are] systematically harnessed by our elites” to turn profits and push through anti-progressive legislation. Indeed, a few days after our administrators recommended Zoom™ as a primary teaching tool, the company’s stock had doubled in value. While we are not accusing Zoom™ or its billionaire CEO of causing the virus’s spread, they are certainly “behind” it in the sense of profiting from its ongoing wake, and are no doubt eager to remain a central fixture in (or as) the classroom after that spread subsides.

Days after first seeing this meme, we’re still laughing—perhaps to keep from crying. It’s hilarious largely because it’s so badly done (inconsistently punctuated, awkwardly copied-and-pasted), in the grand tradition of memes and of the cartoon’s slipshod animation. It’s ironic that its creators spent so little time on this image, given that Zoom™ is using up so much of ours. With the advent of “Zoombombing,” we’re now running cybersecurity in addition to teaching classes, advising students, and attending department meetings.

The current crisis raises many questions about faculty and student labor in the neoliberal university—questions heightened by a technology that turns the home into a classroom, a workplace, and a site of ongoing invigilation. Anna Kornbluh argues that the “directive for immediate transition conceals a tremendous labor intensification.” And in fact, many of us have gone above and beyond to serve our departments and students, even as Rebecca Barrett-Fox has suggested that there is tactical and ethical value in “do[ing] a bad job.” Still, as Kornbluh continues, “What comes after the shock?” Could this crisis, like the meme’s perfectly “bad” craftsmanship, defamiliarize a corporatized learning environment that we have absorbed as inevitable? Might we strive to see ourselves, as Fred Moten and Stefano Harvey suggest, as sites of critical blockage within an institution that fetishizes “productivity” even as it longs to “rid itself [...] of the trouble of labor”? Or, like Scoobs, do we inevitably end up in a hellscape of booby-trapped haunted houses?

Not least, we love this meme because it substitutes, for a posture of “professional” equanimity, one of wry bemusement. Like Fred in the meme—whose expression remains unchanged even as he beholds the villain—we are, though dismayed by this state of affairs, not surprised. If Zoom™ must keep haunting us during the present crisis, we can do the work of unmasking what that means.