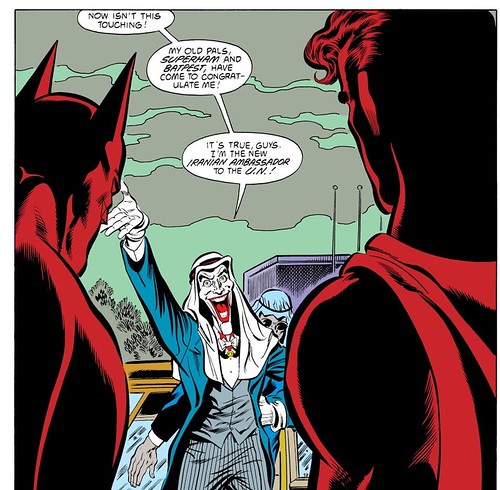 The call for this theme week of In Media Res keenly frames the Joker as “the epitome of evil” and notes that the character “has a long tradition of being represented as a racially and sexually ambiguous Other.” Perhaps one of the more interesting aspects of being a part of comic book fandom is observing how our favorite characters are periodically updated and change with the social and political contexts in which they are written, including our collective ideas of heroism and villainy. Comic books took a markedly darker and adult-oriented turn in the 1980s ushered in by the more serious and politically subversive themes of Frank Miller’s The Dark Knight Returns and Alan Moore’s Watchmen, among others. In more recent years, the storylines in comic books haven’t just been responsive to current events, they have arguably become influential forces of popular and political culture themselves, especially with the ascendance of the global big budget blockbuster films from both Marvel and DC Comics. Considering this influence then, we should take seriously the narratives of comic books in their portrayals of race, gender, sexuality, and other elements of lived experiences and identities.

Another storyline that helped push comic books in a darker direction in the 1980s also portrayed one of the Joker’s more notorious misdeeds—his murder of Jason Todd, the second Robin, in a four-part series titled A Death in the Family (Batman #426-429, 1988). Notably, this series was published during the Lebanese civil war and when US-Iranian tensions remained high. Near the beginning of the series the Joker acquires a cruise missile and rather than fire it at Gotham City Hall, declares “I’ll have to sell it to some Arab terrorists instead!” The Joker travels to the Beqaa Valley in Lebanon, described as “the very heartland of Shiite terrorist activity,” and sells the missile to Lebanese militants who intend to fire the missile at Tel Aviv, only to be foiled by Batman and Robin. The Joker also appears to be speaking Arabic in some of the panels. Eventually the Joker captures Robin in Ethiopia, ruthlessly beats him with a crowbar, and later kills him with a time bomb. Batman finds Robin’s brutalized body at the site of the explosion, his angst and rage at the Joker more intense than ever before. When Batman later closes in on him, he is stopped by Superman who hesitantly informs him that he cannot touch the Joker because per the US State Department, the Joker now has diplomatic immunity. The Joker then appears wearing a white agal, declaring “It’s true, guys, I’m the new Iranian Ambassador to the UN! Eat your hearts out.”

In A Death in the Family, the Joker’s new level of cruelty is unmistakably coupled with his affiliation with Arab terrorists and the pages of this series are rife with Orientalist depictions and Islamophobic content. Many comic books are liberatory spaces and politically subversive. But as seen in A Death in the Family, comic books can also be regressive in their geopolitics, if not outright racist. Here the Joker was a tool to embody the politicized and racialized epitome of evil.