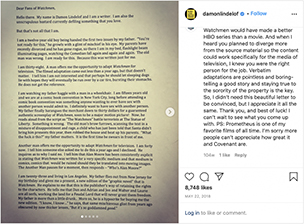 Screenshot of Damon Lindelof's letter to Watchmen fans, posted to Instagram on May 22, 2018 with the caption, "Day 140."

It is 1988. Alan Moore and Dave Gibbons’ maxiseries Watchmen finished its run a few months ago, yet it has already been deemed “the best of breed” in its genre (Cocks and Gallagher). In 2010, Time will take it further.

It is 2019. Damon Lindelof’s HBO miniseries Watchmen is airing each week, garnering universal acclaim along the way.

It is 2009. A film adaptation of Watchmen is in theaters. Reviews are mixed; to some, it “sinks under the weight of its reverence for the original” (Kennicott).

It is 2018. On Instagram, Damon Lindelof is writing a letter to Watchmen fans, promising his miniseries won’t be another adaptation. The original is “canon,” “sacred ground,” “our Old Testament,” thus it should “be remixed” instead (4). As Lindelof explains, the miniseries will “sample” the original’s “bass lines” to create a narrative that preserves and honors “what came before it” (4). In many ways the miniseries delivers on this promise. Johndan Johnson-Eilola and Stuart A. Selber suggest that remixing entails transforming elements of an original text into a new text that can “address specific issues, readers, and situations” and “solve concrete problems or enact real social action” (380). So appears to be the case with HBO’s Watchmen (Luckerson; Pan; Sims; Vary).

Considering the miniseries’ success requires considering its audience. Indeed, audience is essential to any rhetorical situation, which situations involving remixes and fandom culture demonstrate well (Stedman). Accordingly, Lindelof primes Watchmen fans to be receptive by writing to them on Instagram seventeen months before the miniseries’ premiere. There, Lindelof presents an array of ethical appeals centered around him being a skilled, successful writer and a fellow fan—two intertwined identities that qualify him to remix Watchmen, Lindelof’s letter suggests.

Arguably, the letter itself is a remix; Lindelof samples elements of Watchmen and transforms them into subtle nods imbued with new meaning that implicitly support his argument. For instance, Watchmen’s “Chapter IV: Watchmaker” features the character Dr. Manhattan’s origin story, told distinctively through “non-linear first-person narration” (Weiss). For the first two pages of his letter, Lindelof takes up this narrative style to tell his own origin story as a Watchmen fan, offering intimate insights into his unyielding reverence for the original: “I am a twelve-year old” and am beginning my journey as a lifelong fan; “I am thirty-eight,” and others want to entrust me with the responsibility of adapting Watchmen; and so forth (1). Collectively, these personal and professional Watchmen memories show how being a fan has influenced Lindelof’s life: a) others have repeatedly offered him the opportunity to adapt Watchmen, and b) he has repeatedly said “no.” Yet, it’s not simply that Lindelof said “no” that conveys his ingroup membership; it’s how. Describing one opportunity, Lindelof writes, “I tell him I am not interested and that perhaps he should let sleeping dogs lie with hopes they will eventually be run over by a car tire, bursting their stomachs. He does not get the reference” (1). But fans will get it, this anecdote implies.

Overall, the letter presents a compelling case. In this five-page “exercise in oversharing,” Lindelof interweaves textual references from the original with his personal Watchmen experiences, a candid discussion of "our creative intentions" for the show, and a preemptive counterargument to “the inevitable pushback and hatred I will understandably receive” (2-4)—all to convince Watchmen’s “true fans” to be open to the upcoming remix. Why should they be? Because “I am a true fan, too” (4).

Lindelof doesn’t identify himself as a true fan until the letter’s penultimate page, where he again prioritizes audience: “I’m a true fan, too. And I’m not the only one” (4). The two sentences stand on their own line, followed by an acknowledgment of his privilege and positionality and an indication that he won’t be the only fan shaping the show. Rather, it’ll be a “collective experience of many brilliant minds” with diverse identities, one of which they share: fans who “absolutely [adore] Watchmen” and who have been listening to its fandom (4). You don’t want another adaptation, True Fans of Watchmen? Good, because you won’t get one. Instead, Lindelof’s letter offers an auspicious glimpse at his preparedness to deliver on what he is promising to his audience: a remix they’ll respect.

Kennicott, Philip. “Movie Review: Adaptation of ‘Watchmen’ is Graphic but Not Novel.” The Washington Post, 5 Mar. 2009.

Luckerson, Victor. “The Great Achievement of ‘Watchmen’ is in Showing How Black Americans Shape History.” The New Yorker, 13 Dec. 2019.

Excellent piece, Sarah!  I especially appreciate your own "remixing" of Dr. Manhattan's non-linear thinking in the first portion of the article.  Lindelof's post reminds me a lot of what Suzanne Scott has called "fanboy auteurism," where creators use paratexts to both establish their fan cred and capability for managing the texts related to that fandom (coincidently, one of Scott's examples is Zack Snyder, who definitely participated in the same practices with his adaptation of Watchmen).

Again, thank you for contributing such an insightful analysis of this key paratext to the series!