Atmosphere: On the second day of observations, I sat on the cement step of the entrance door on the left side of the Public Health Research Center. From the observations on the first day, I noticed that I felt more exposed on the right side of the PHRC and the sun from Day 1 was hot and uncomfortable, so I thought it would be convenient to observe the camera on the left side of the building entrance. However, the weather proved to be unpredictable and the wind speed was so high that a few of my notes were blown into traffic. Of course, like a “good citizen” I remained seated on the cement step and refrained from chasing the loose paper into the busy street.

When observing the direction the camera was capturing, I noticed that the pedestrians crossing the street never lingered for longer than ten minutes. All of the passersby seemed to be headed somewhere. They had goals, destinations, and objectives for the day. The intersection simply made it easier for the flow of traffic and pedestrians crossing the street to avoid congestion as well as collision. 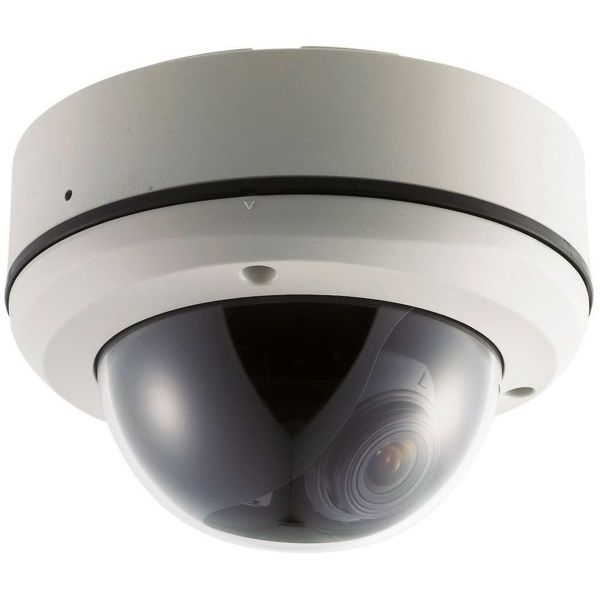 The DPRO-AS600 vandal-proof CCTV isa weatherproof camera that is similar to the make/model of the surveillance camera on the outer wall of the PHRC. This surveillance camera is designed to work under severe weather conditions. It’s also designed to mount on walls and ceilings to capture several angles. On the first day of observations, I immediately noticed the cameras. They were mounted over brick walls and the black tint of the cameras didn’t allow them to blend into their surroundings. I also noticed that the cameras were mounted above windows.  The situation or purpose for this camera placement is to capture all of the activity around the left entrance door as well as the activity in the traffic intersection. With regard to the latter, the camera’s placement seemed reminiscent of the Abu Grahib torture images: photographs, images, and videos do not save lives. Whoever monitors the surveillance camera’s live feed cannot intervene when a crime takes place because he is monitoring the camera. Personally, I feel that the cameras serve as preventative measures, warning possible intruders. In this act of watching and monitoring all citizens, we are all recorded and considered potential criminals.

For the Mass Observation assignment, I chose to observe the University of South Carolina Public Health Research Center.  On the first day of observing, I noticed six cameras mounted on the building’s exterior. The building had three different entrances: the front, the left, and the right. There were three separate cameras monitoring each entrance door, all of them were similarly positioned at high angles for clear vantage points. I chose to monitor the left entrance surveillance camera because it was convenient. The right and front entrances were in direct sunlight and incredibly visible. I thought that the left entrance would be less visible because it was hidden in shade. I also thought that it would be the most comfortable spot to observe because it was a shaded area away from the sun’s rays. In an attempt to remain hidden, I ignored what could have been the most efficient way to monitor the building and instead found a way to obey social cues. I was the only person sitting on the cement step, so of course I felt like I was doing something outside of the norm. I hid away in the shaded corner of the entrance thinking that I would go unnoticed, so that I would not face punishment from the public and be deemed some sort of outcast.

On day two, as I continued to observe the surveillance camera, I noticed that the camera was angled in the direction left of the entrance and the traffic intersection.  The surveillance camera monitors the left entrance in an attempt to prevent as well as capture criminal activity. In “Premediation: Affect and Mediality After 9/11,” Grusin writes, “Unlike prediction, premediation is not about getting the future right. In fact it is precisely the proliferation of competing and often contradictory future scenarios that enables premediation to prevent the experience of a traumatic future by generating and maintaining a low level of anxiety as a kind of affective prophylactic” (46). Like any photograph or video that captures a crime, the image is there to act as visual evidence; however, the image cannot stop – that is, prevent—the  crime and the photographer is “acting” by capturing the image, so he too cannot intervene. In this way, the purpose of the surveillance camera there is to prevent crime because of its visibility. The camera is placed in the open and it’s easily spotted. Perhaps whoever mounted the camera was hoping that possible intruders would see it, fear deviating from acceptable behavior, and the camera would, therefore prevent crime. Although Grusin is primarily concerned with the smoothing of technology, the   ability devices have by seamlessly weaving into our lives; it’s quite interesting that I immediately assumed the device was aimed at preventing crime. I think that my original assertion in itself speaks volumes about my role as a “law- abiding” citizen (Sekula, 15).

In mounting these cameras, the security staff also creates an indexing atmosphere. In “The Body and the Archive,” Sekula writes, “…Oliver Wendell Holmes…compared photographs to paper currency. Presumably then, the [photographic] archive could provide a standard physiognomic gauge of the criminal, could assign each criminal body a relative and quantitative position within a larger ensemble” (17). Here, Sekula insinuates that photographic evidence is currency that can easily establish a set of equivalencies. In the act of capturing the public, the surveillance camera footage and “voyeur” monitoring the camera frame the entire body of the captured public as potential criminals. This concept is incredibly intriguing because in its act of policing, it assigns a specific value to each individual it captures based on their public and possibly private actions. In “Public Privacy,” Slobogin wites, “…the three ways cameras can, in theory, be useful: they might help spot incipient crime that can be prevented, or at least solved , through immediate action; they might create a record of crime that can be used in identifying and convicting perpetrators at some later time; and they might deter crime. In each of these three areas, obstacles to smooth functioning exist” (85-86). Slobogin identifies that while the cameras are monitoring the public’s actions, they are also “teaching” the public how to behave as well as be seen. A private gesture like picking one’s nose may turn into something publicly offensive and embarrassing, so in the presence of cameras people avoid picking or even coming close to picking.

This smoothing effect also exists in the movement of traffic and in the activity the camera captures in the intersection. In theory, thoroughfares are designed to increase mobility and efficiency. In a way, the intersection offers four different directions that choreograph a rhythmic flow that speaks to Taylorism. There’s a flow to the traffic as well as the way the pedestrians cross the street. When I was observing the pedestrians, I noticed an order to the movement and a group of people rushing in and out of the building at a certain time. I was convinced that the rush of traffic out of the building signaled that a class ended.

The seamless presence of technology is also present on day two of the observation, when I noticed how unnoticed I was standing on the side of the building. When I began to take pictures, I thought the pedestrians would ask questions, but instead of trying to dodge me or the camera, the pedestrians just went about their business. The pedestrians walked about the streets as if I wasn’t there at all. Perhaps technology and photography have become such smooth practices within our society that they’re transitioned into natural occurrences or what Slobogin mentions when he writes, “Anonymity…the state of being unnamed…the assurance that, when in public, one is presumptively nameless-unremarked, part of the undifferentiated crowd- as far as the government is concerned” (91). This mentality is exactly why surveillance is ignored. The dialogue shifts and instead of discussing what information was collected by Google, someone asks about the number of users and the odds that their account was flagged for malicious material. Surveillance works because people tend to focus on the amount of what’s obtained rather than the content of what is being assessed.

Of course, the relation between indexing, policing, and the presumption of public anonymity is incredibly significant when living in a digital world. The public ignores surveillance for many reasons, the most poignant or interesting reason being that individuals are seemingly free from being identified. It’s the assumption that the public itself is such a large group that it’s impossible to discretely catalogue everyone. However, in a digital age, cameras are literally everywhere. Most of the devices used for private reasons can even be accessed by the public through social media as well as by criminal court and police for prosecution. Technology is weaved into our consciousness as well as our body language and that convenience creates a bond between the user and the device. The issue arises when that bond is disturbed.

4.)Slobogin, Christopher. “Public Privacy: Surveillance of Public Places and the Right to Anonymity.” Privacy at Risk: The New Government Surveillance and the Fourth Amendment. Chicago, IL: The University of Chicago Press, 2007. 79-117.