The paradox of social media encounters is that they bring together strangers while straining real-world friendships. Making better use of digital interactions means scrutinizing how our ordinary rhetoric functions in these new spaces. I was recently part of a Facebook channel for a Ph.D class where I witnessed two distinct, yet successful, attempts of students to console one another about academic issues. Consolation is a difficult social practice that can seem paternalistic if done poorly or, when successful, give much-needed mental and spiritual aid. As the students showed, when we commit to using the online space to be good Samaritans, helping others revive their flagging motivation, then the digital space really can help us relate. But how does one console digitally, among a mix of friends and strangers, for whom aid might be unwanted unless properly framed?

An important condition of consolation is to prove to the audience that they are up to the task. This is shown by Seneca in his “On Consolation to Marcia.” His opening sentence extols Marcia’s capability, and indeed he writes that it is, in fact, his belief in her that leads him to offer consolation.  My classmate on the back channel employed this type of rhetoric effectively. (For context, our professor had given us some formatting requirements leading up to our final that took some of the class by surprise. There had been a bit of frustration as students tried to make sense of the instructions.) The student wrote:

"I can definitely understand why you guys are frustrated, especially if you were working in accordance with your home institution's expectations. But it may be a tad unfair to say he gave us no warning of his expectations. Still, as far as class goes, his word is law, I suppose. I am sorry it's created extra work for you all though."

She responds to the difficulties without condemning the situation. Like the consolation genre more broadly, this quotation uses “law” to render the situation ordinary, salvageable. The professor's words become a means of shared ethos for the group. Finding commonality is important when we are dealing with those who are relative strangers to us. Such a point of convergence may be a text, an abstraction, or, in this case, a person. Note the digital logic of the consolation, where she would be obliged to follow-up in an asynchronous format.

Another student consoled the group as well. She also invoked the principle of calling upon the internal strength of her classmates. By posting a GIF directed to reduce anxiety (See figure below), she thought to help her fellow students create calm. The act of demanding well-being from oneself is often enough to get one out of their initial morass. In other words, if the person being consoled does not feel they can accomplish the task in question when taken as a whole, then what is given should be calibrated to the largest objective that can be accomplished. She found a means of consolation that neither denied nor confirmed the gravity of the situation but increased the wherewithal of those in it. My consolation was rather more cumbersome, a call for a breakout group to resolve our formatting issues together. My peers understood the conditions with which we were concerned better than I, listened to one another, and imagined perspectives to enable success. 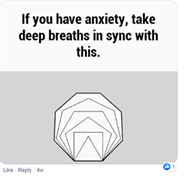 Since social media is a series of discrete spaces built by users, many possible modes of discourse exist even on a single social media platform. One is privileged to access many worlds. However, affording oneself of a digital community obliges the user to offer assistance when a group member is ailing. Sometimes consolation might involve no more than a reframing of a problem, but this can make all the difference.

This reminded me also of Plutarch's famous "Consolation to His Wife" from the Moralia. There is a consistency here in classical consolation form that you point out makes its way into the social media platform, as well. Well done and interesting.

Hey, man, thanks for commenting. Good call with Plutarch. I have been wrestling with his "On Being a Busybody" and Theophrastus' "On Character." What a one-two kidney punch to the soul that turned out to be. Trying to reverse one's moral instincts after four decades is like studying Russian in night school: less about grasp of content than the signalling of effort ;)