In early 2008, New Zealand’s Victoria University submitted a proposal to merge its Film Studies department into a new school of “Visual Culture”. The proposal, which advocated the convergence of disciplines in the name of inter-disciplinary creativity, was heavily criticised by both staff and students, and was dismissed shortly after. The following year, the New Zealand government announced in its yearly budget that Victoria University’s humanities faculty would lose $800,000 NZD of funding (while the sciences enjoyed a 2.3 million dollar bump). Then, in December 2011, the university, under the guidance of an appointed working party, agreed to dismantle its Gender and Women’s Studies program (effective semester one 2011). Each of these events are symptomatic of an ongoing crisis for humanities faculties around the world. Specifically, these examples signal the extension of the neoliberal paradigm and market logic into the university. However, this narrative begins to frame such a crisis at the level of the institution and its government. What it elides are the technologies of the self, and the conditions in which students themselves are encouraged to construct branded identities. Here, we offer a local account of New Zealand’s higher education structures from the perspective of the student, arguing that this branding of the self folds back into university departments, as a result of their responsibility to facilitate this branding process through the adoption of a ‘service’ logic. In turn, this process produces, and re-produces, the discursive networks that mediate the relationship between students and humanities programmes.

Prospective students in New Zealand, as in any other part of the world, are faced with a choice of direction in the type of study they wish to undertake, which is part of a much larger formation of selfhood. The discourse of personal transformation has always been part of higher education, from the stereotypical freshman to the mature student: both are entrenched in a journey to, as academics James Coté and Anton Allahar put it, either “find oneself” or “better oneself” as “architects of their own destiny” (110). However, the rise of what Alison Hearn (2010) has termed ‘the promotional’ (and distinctly neoliberal) university brings with it a language of personal responsibility, and a mentality dictated by market logic, where the journey of becoming is much more narrowly defined—that is, to pursue a career. In July of last year, New Zealand’s Tertiary Education Minister Steven Joyce outlined the centre-right National Party-led Government’s plan to directly link tertiary education funding to vocational output targets in a statement, which exemplifies neoliberal attitudes in the contemporary climate:

I want to see funding linked to employment outcomes, not just internal benchmarks. This will send a strong signal to students about which qualifications and which institutions offer the best career prospects. And that’s what tertiary education has got to be about (Binning). 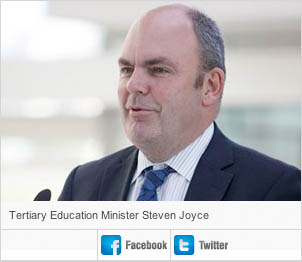 The message is clear, both in its objectives, but also in what is omitted. If the university’s primary role is the production of an educated workforce, then its traditional ability to function as a necessarily external space for the production of knowledge, and with a responsibility for societal critique, is clearly being eroded.

The Self-Branded Student and the ‘Service’ Logic

As external bodies stress the importance for vocational outputs from higher education (in New Zealand this is as much a part of public discourse as it is a governmental priority), students are not only fed the idea that universities are, in the words of Derek McCormack (chairman of New Zealand’s Vice Chancellors’ Committee), becoming “more and more like an employment agency” (Beaumont), but furthermore, are warned of an increasingly competitive job market. The bottom line, we are told, is that graduates need to seek opportunities which will help them to ‘stand above the crowd’. One response is the construction of a self-brand, or what Anothony Giddens calls ‘the reflexive project of the self’, which condenses a student’s university experience into one aspect of a much larger personal branding project. Here, the self becomes a commodity, which is self-consciously produced via a series of ‘meta-narratives’ and ‘meta-images’ of the self-as-brand, “through the use of cultural meanings and images drawn from narrative and visual codes of the mainstream culture industries” (Hearn 197). By this logic, brands do not simply exist in a one-to-one relationship to their commodity referent, they also function as part of a wider visual context for consumption, where the brand becomes a locus for the mediation between the brander and the consumer (Hearn 2011).

The relationship between the brander and the brand gestures outwards, as a particular discourse informing the individual’s relationship with the institution of the university, which is perceived as the provider of a service. In this model, students start to appear as autonomous ‘choosers’, perceiving education as what Hearn calls a “zero-sum game, where they get [in the form of grades] what they pay for [in the form of capital or fees]” (2010: 205). This upsets the hegemonic discourse of academia, where teaching staff are privileged as the sanctified purveyors of knowledge, and students are placed in the subordinate position of the relatively unknowledgeable learner. Under the neoliberal paradigm, lecturers are viewed as the providers of a service, while the individual, self-branding student perceives themself to be at the centre of a network of power-relations, which is heavily informed by the distinct logics of the marketplace. The end result is a pair of competing discourses: between the views of academic staff, and the new expectations of the self-branding students

The external representation of the branded self is the CV, a site where the various expressions of the personal brand are gathered for viewing and consumption by the marketplace of potential employers. The many hours, which the student has spent in tutorials, lectures, and computer labs, become the means to a very specific end: the degree, which functions as a baseline signifier for ‘employability’ in the contemporary job market. When a degree, papers and grades are displayed together in the format of the CV they are usually accompanied (and contextualised) by a listing of ‘transferable skills’, which, once acquired (at university, or elsewhere) are, in theory, applicable to any relevant professional opportunities that the student may be applying for. 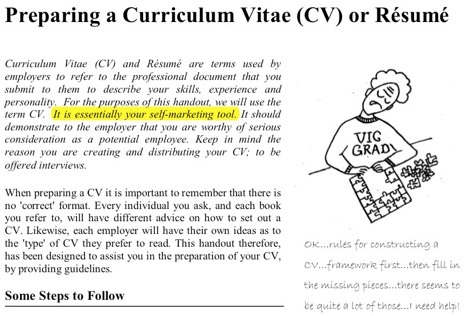 The Crisis of the Humanities

The imperatives of the promotional/neoliberal university has implications for all faculties, but in different ways, as each school and department are forced to position themselves in accordance with a service logic. Indeed, some faculties are better suited to this logic than others; however, amongst the most threatened are the humanities. At the heart of this dilemma, lies a familiar paradoxical question: How can the humanities gain authorisation from external interests (government, industry, public), by answering the calls for productive workforces; all the while maintaining the core function of developing critical or analytical perspectives of society? In all likelihood, the inherent contradiction in this question will continuously bring those interested to a moot point. Nevertheless, the schools that make up the humanities are each assigned the task of negotiating this crisis by re-branding their discipline within the terms of a service logic, while desperately holding on to the foundations and histories of their particular field.

On behalf of its Media Studies department, Vicotria University’s Career Development and Employment service released a Career View article (Dec 2005) outlining the media industry, the function of the department, the ‘skills’ that students develop, and crucially, the career opportunities that are available where such skills are prerequisites. In this context, the article works to respond and position the department within the discourse of the ‘university as service’. However, in transferring the Media Studies department into a branding logic, the nature of the field; its methods, approaches, theoretical frameworks andresearch are, in the Career View document, essentialised down to a core set of banal skills: “written communication skills, oral communication skills, relationship skills, leadership skills, research skills, analytical skills...” Here, the rhetorical work of ‘skills’ reveals how the Career View document is trying to appeal to various constituencies (future students, government, industry), allowing the department to make a broadly progressive sales pitch, while also eliding the tensions inherent in its ‘service’. By way of example, Media Studies’ Career View document explains how students in the program will gain valuable leadership skills: “because they understand communication” (4).The vague use of the buzz-word “communication” is supposed to explain why Media Studies students should make good leaders. The connection here is actually quite tenuous though, suggesting that students will acquire these skills through some kind of osmosis as a result of the group work, presentations and so on that are a regular part of the department’s core curricula. The flexibility of the ‘skills’ rhetoric, in that it comfortably mediates the humanities with the imperatives of the neoliberal university, makes up one part of the rationale for skill-based thinking. Elsewhere however, “skills” are also evaluated against “knowledge” to indicate a kind a prolonged value to the branded self. In a guideline to preparing a CV, the ‘Victoria University Career Development and Employment’ service define skills as “practisedability; expertise”, and argue:

The great thing about 'skills' when compared to ‘knowledge’ is that skills do not date. It doesn't matter where your skills are acquired - at home, work, committee meetings, or as a member of a sports team, because once developed you can use them in any environment, industry, profession or occupation.

Indeed, “skills” are “transferable” between multiple environments, and importantly, between departments, degrees, and jobs. Therefore, the rhetorical work of skills is also to standardise the degree itself, as all departments are essentialised down to these skill-sets, which often overlap with each other. The emphasis on superficial and easily digestible information is precisely what branding is all about. This process recalls Barthes’ bourgeois myth-makers, who draw on common cultural knowledge and recognisable stereotypes to produce and re-produce stories, images and discourses which are used by individuals, corporations and communities to define themselves, and their relationships to the world around them (Hearn 2011). But myths also mystify, and what the logic of the CV renders invisible are the heavily differentiated processes of knowledge, which individual departments have to offer students. Instead, the university experience of learning is reduced to a banalized assortment of ‘transferable skills’, individual ‘experiences’, ‘achievements’, and an overly determined set of grade scores. When viewed in the context of the trend to vocationalise New Zealand’s tertiary education system, these discourses also have an ideological resonance that by its very nature undermines the traditional role of the humanities. Universities like Victoria are now under increasing external pressure to align internal operations with external outputs, meaning that the practice by which a department can conflate certain aspects unique to its field with the marketing ‘skill-set’ in a superficial document like Career View may no longer be enough to guarantee their prolonged existence under the neoliberal paradigm.

Hearn, Alison. “Through the Looking Glass: The Promotional University 2.0.” Blowing Up The Brand: Critical Perspectives on Promotional Culture. Eds. Melissa Aroncyzyk and

It's depressing but by now not surprising to read that the post-disciplinary methodology of visual culture was used as an umbrella term for budget cuts and mergers--can you point me to any links where I can find out more about this? Thanks! Note that at Canterbury, the Uni was simply going to close Theatre and Film altogether, so the targets seem more instrumental than specific.

The VUW student magazine Salient ran a series of articles on the proposed changes.  Here's one, which gives some initial background.