The observation I conducted in Columbia was right here at our University.  The surveillance of Thomas Cooper Library (TCL) at the University of South Carolina was indeed substantial and impressive.  Thomas Cooper Library is 35 years old and encompasses a space of 290,000 square feet containing 45 miles of shelves, holding 1.5 million volumes! This is no small place to survey.  Upon my first exploration of the surveillance of TCL, I counted 26 cameras in the entire library and 14 cameras in the Ernest F. Hollings Special Collections Library.  I had no idea that there were so many cameras watching the students, faculty, and visitors of the facility. Here is a cross sectionof the 7 floors of TCL. 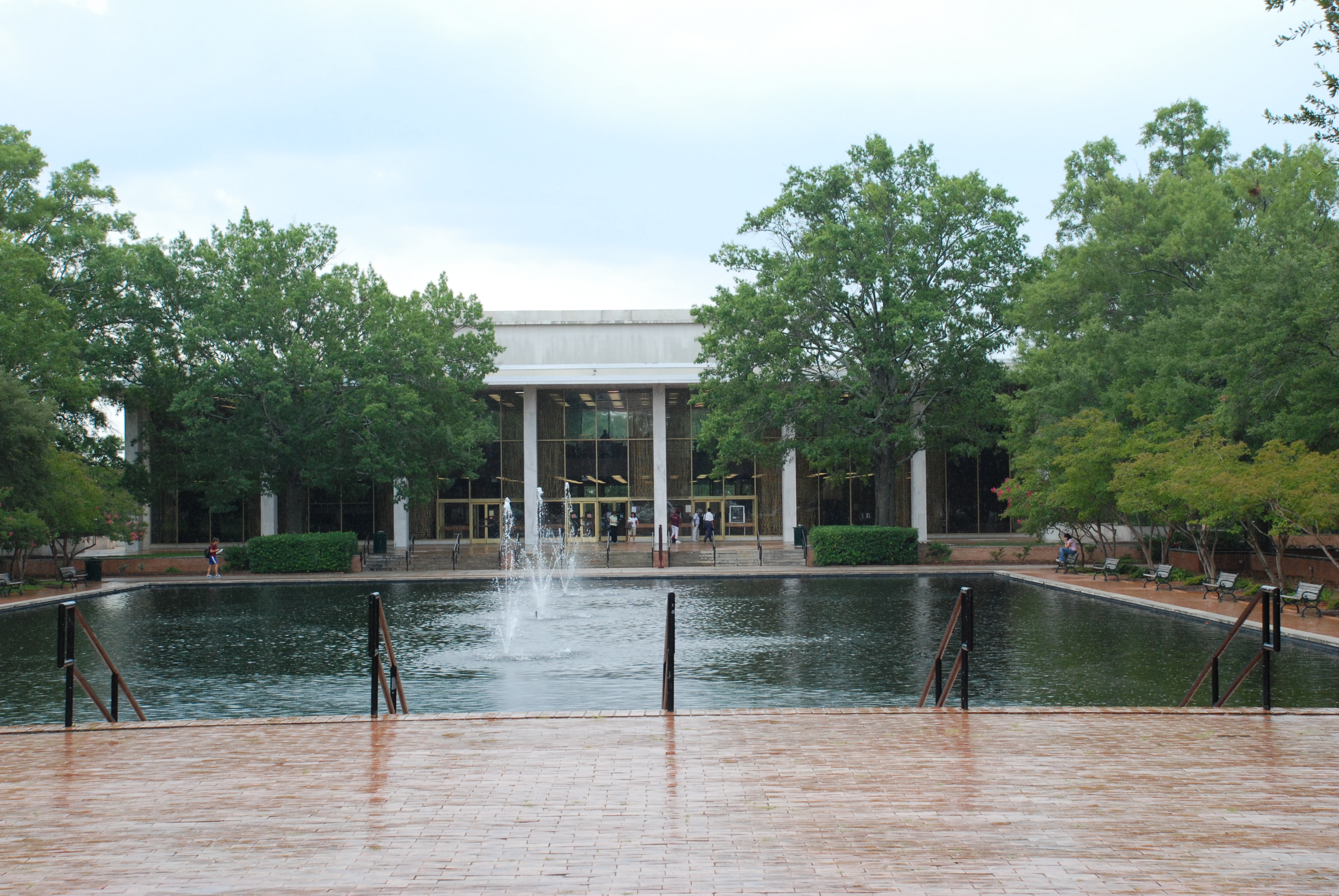 For the surveillance observation of TCL, I chose to monitor two cameras located in front of the entrance.  These are two Honeywell security cameras mounted to the sides of a column located in the lobby.  One of the cameras views the left of the front doors and the other looks straight towards the front doors.  I decided to observe this area because these two cameras see every person that enters and exits the library.  In the event of any crime or misdemeanor, the footage from these cameras will be checked first.  I was also curious to see how many people noticed the cameras upon entering the library, and if they reacted to them.  This is a map of the main level of the library, where the two cameras that I observed are located:

During my study of TCL on June 15, 2011, from 10:30am- 12:30pm, I noticed that almost all of the people entering the library did not even notice the camera directly in front of the door.  Most of the people entering came in at a steady pace and knew the direction they were headed.  Few people stood in front of the door for a couple seconds deciding where to go.  I only noticed one person looking at the camera as they walked through the door, and two people seemed to avoid the camera as they walked through.  The first had his face turned down and away from the camera, and the second had his head turned away from the camera and walked very quickly.  During my observation, there was also a librarian walking around the front of the library monitoring students.  She made her way around the perimeter of computers located in the lobby a few times and stood by the front door looking in for a couple minutes, and then disappeared back to a desk.

Making this data quantifiable added something more to my observation as well. I decided to take count of the number of people entering the library and leaving while I was there. I tallied every person who walked through the doors.  The number of exiting peoples was easier to obtain, as there is always an employee of the library sitting by the exit with a clicker to count every person who leaves.  So, I talked with the head of security, Tucky Taylor, and she had no problem with me obtaining that number for my observation.  So, these are the numbers:

My experience of observing the surveillance at TCL was interesting, because it forced me to step outside my comfort zone and question something new.   While I was going around looking at all of the cameras during my first observation, I became aware of my own worry that someone was watching me.  My hyper-awareness of being approached by faculty or security made me somewhat uncomfortable.  By acting out of the norm and searching for surveillance, I felt that I made myself noticeable.  By the same token, during my second day of observation I became the surveyor and caused other people to become aware of my watching them.  While I sat by the front door, I also decided to tally the number of people that looked at me as they walked in.  This number was nowhere near the total number of people entering, but it was interesting that so many did notice my eyes on them.

People looking at me- 43

Here Christopher Slobogin’s notion of public anonymity is interesting to consider.  When you walk into the library, you participate in the functioning of public anonymity unless you step outside the norm of student behavior for some reason, as I had.  You are nameless and invisible until you behave criminally or do something out of the norm.   I was no longer nameless and invisible when I approached the employee at the exit to acquire data about people leaving, or when I spoke with the head of security at the front of the library.  My presence became known because I made myself known to the library staff.  In a similar way, the individualizing function of discipline happens in the library as well.  Many students come into the library to use the computers.  We are required to type in our individual USC id number and password to log on to a computer.  This identification number holds our personal information with the University.  We are “separated off” from others by this, because the institution knows which computer we are on and likely what we are doing.

Before my observation, I talked with Tucky Taylor about the security of TCL.  I was surprised to learn of the prevalence of theft in the library, but she explained that “the library was the perfect place to steal from”.  She said this was because people come to the library over and over and they begin to feel safe there.  They don’t think anyone would ever steal their stuff or anything could happen there.  She described there being an “aura of safety in the library”.  However, this is precisely how theft happens so often.  Opportunity arises and people are desperate for money, so they steal.  People run out of their loan money, can’t afford their bills, or whatever the case may be.  Taylor says theft is often times more opportunity crimes than pattern crimes, and they catch the guilty about half of the time.

This opportunity theft in a realm of safety becomes interesting in light of Richard Grusin’s notion of anticipation as a function of the logic of security.  Grusin describes a state of anticipation of security that allows for pre-emptive measures to be taken to intervene in crime.  Premediation is “…the implementation of premediated algorithms of data mining and risk analysis to uncover patterns of suspicious behavior before they could be actualized…” (Grusin 123).  Just as in the film Minority Report, crimes could be avoided by effective pre-emption.    Premediation encourages our society to network and mobilize, and make ourselves visible and susceptible to security and the kinds of surveillance it entails in order to collect data and take pre-emptive measures to protect ourselves.

“Our everyday transactions of mediation, transportation, and communication are encouraged for security purposes not only by making them easy and readily available but also by making them affectively pleasurable…by maintaining low levels of affective intensity that provide a kind of buffer or safe space…”(Grusin 126).

This quote describes the “safe” space available for us to communicate and work through media. The library has come to be a place of safety for its visitors and the surveillance cameras operating there communicate safety to us.  However, the fact of the matter is that we don’t even recognize them anymore but we always anticipate their being there.  Opportunities that might present themselves to potential thieves in the library are encouraged to be avoided, by signs warning students not to leave their belongings unattended.  Students often don’t even notice these signs.  This is how risk management works: it relies on a tension between prevalent and anticipated existence of cameras and a lack of awareness of them. 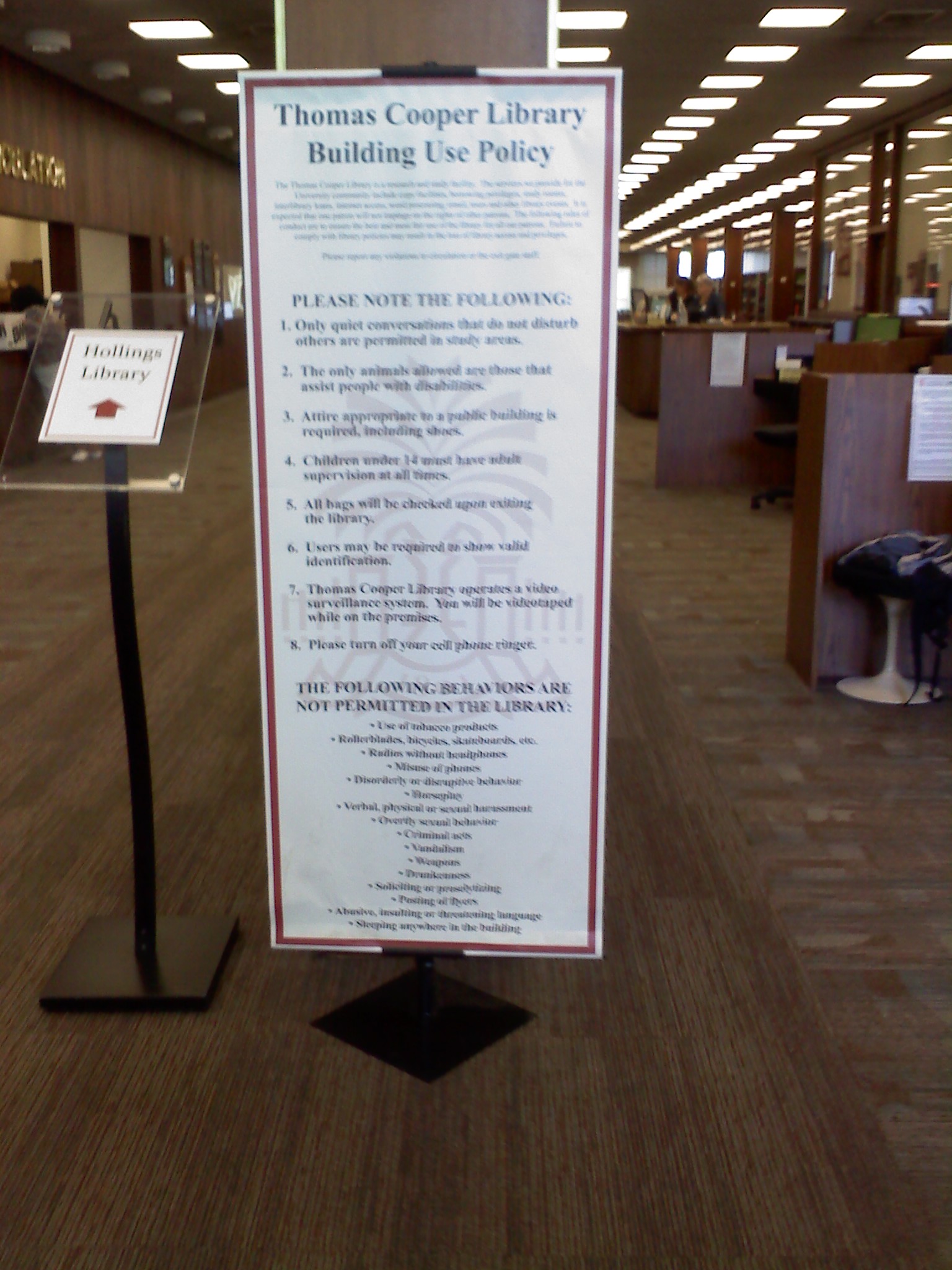 This sign is posted at the front of the library on the main floor. #7 states, “Thomas Cooper Library operates a video surveillance system. You will be videotaped while on the premises.”

Slobogin, Christopher. Privacy at Risk: The New Government Surveillance and the Fourth Amendment. Chicago, IL: The University of Chicago Press, 2007.

I think it's interesting that you talk about an "aura of safety" in the library. I certainly think of it as a safe place (not to mention the thing is built like a bomb shelter). Also, in talking about "public anonymity" in the library, I think the only differentiating value between the people there are how they are organized in the space. For example, you might see a scattering of individuals all along the tables on the main floor; small groups clustered together around the perimeter of the library, and then library staff, positioned behind different boundaries (the circulation and help desks, for example). Their positioning helps you classify them more definitively with a label, rather than with a name and face.

I find a lot of interesting tidbits about your observation.  Mainly because I've been to this library countless of times and wasn't aware of majority of the things you observed.  For example, I did not know there were so many cameras inside the building.  I just assumed there were a few here and there to cover the main areas, but wasn't aware of how many were actually identifiable.  Another thing I wasn't aware of, was amount of theft.  This caught me by surprise, as I assumed it did to others as well.  I didn't really think of the library as a place for theft.  But after you talked to the library head and explained it in your observations, it makes perfect sense.

The location of where you chose to observe was probably the best choice, because you would have a hint of how much time each individual spent in the library. It is interesting that the librarian felt she needed to monitor the students with all the cameras placed. However, since I now realize the library can tend not to be such a safe spot at times, I guess I have a better understanding of the librarian's motives.

After reading the paragraph about Tucky Taylor with the security, it is bewildering that people believe in the safety of stealing from the library with a legible sign in plain sight that everyone ignores every time they walk in. Students have to feel as if the cameras don’t work or they can become part of the mass group studying so if they fit in stealing won’t be out of the ordinary for them. It was surprising that the people didn’t even notice the camera as soon as they walked in. It’s also interesting that you were the only person in class to tally how many people looked at you and it makes you think how many people really do look at you from day to day. In your case it was only 43 in a two-hour span, if we are up for 12-14 hours a day the numbers start to add up pretty quickly.

I find it funny that so many people opted to not even think about looking/searching around for a surveillance camera of sorts. If I were to be walking in the library, which I do, I always check to make sure I sit near an area that a camera is near just because I always take my laptop and my ipod with me. I wouldn't ever want to lose either of those two things!

I'm shocked that they changed the rule though about checking bags on the way out. It seemed like a very harmless way to deter people from trying to steal anything from the library.

Are there other sites of "safety" that we commonly visit? How so?