Digital media provide the curator with the means to convey more fully the complex relations between the objects in an exhibition and lived human experience across time and space in a way that is difficult to achieve solely with objects. Via digital media (both material and immaterial) the curator can more explicitly visualize the concepts and networks those objects are materially representative of, thereby allowing her to explore in more depth the centrality of the physically-present objects to the exhibition’s narrative and argument.

The Focus Gallery at the Bard Graduate Center in New York is a venue for small-scale exhibitions that utilize material culture to explore scholarly topics. In the forthcoming exhibition ‘Carrying Coca: 1500 Years of Coca Bags’, we will display archaeological and ethnographic chuspas–small, elaborately decorated, woven bags that for centuries have been used to carry coca leaves–to explore the intersecting histories of coca and hand-crafted textiles in Andean South America. 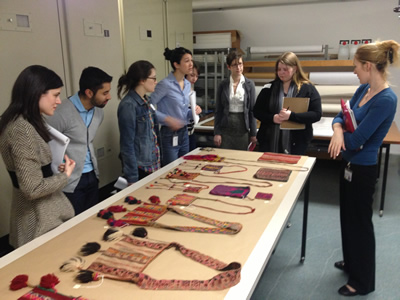 Because they are a mild stimulant, coca leaves are chewed in the Andes during arduous labor and to counteract the challenges of a harsh, high-altitude environment. Coca is shared between friends and relatives, entwining communities and individuals in ongoing bonds of reciprocity. As a sacred substance, coca leaves are also central components of ritualized offerings to the gods. Textiles hold an equally important place in Andean cultural practice. Renowned for their high quality, varied techniques and elaborate designs, Andean textiles are embodiments of specialist skill, expressions of artistic repertoires and displays of social affiliation.

In the present, both textiles and coca are affected by long-distance interactions and socio-political change.  As the raw material for the production for cocaine, coca and the communities who have traditionally used it have become embroiled in the international war on narcotics. While coca is demonized on the international stage, Andean textiles are increasingly recognized and valued outside South America. Sold in tourist markets and online to foreign consumers, they circulate in global consumer markets. Simultaneously, the very production of Andean textiles is impacted by demand for cheap textile goods and broader shifts in global economies as ‘traditional’ techniques and natural materials are increasingly abandoned in favor of synthetic fibers and machine technologies.

As the physical and metaphorical intersection of textiles and coca leaves, chuspas act as a vehicle for examining indigenous practice, networks of interaction and socio-political change at local, regional and global levels. In discussing coca leaves and the bags that hold them, we will present a story of tradition and transformation. Digital media offer the potential to explore the complexities of the exhibitions themes in ways that would be impossible with only the physically present bags.

Practically speaking, digital media overcome problems particular to this exhibition. Current federal regulations prohibiting the import of coca in the US result in our being unable to display coca leaves. In this sense, we legally cannot include physical examples of a material at the core of the exhibition. While physical chuspas are exhibited in ‘Carrying Coca,’ questions of conservation and fragility that surround textile objects, some of which are more than a thousand years old, limit which specific bags that can be on public display. As with the leaves, digital media enable us to introduce the viewer to objects that would otherwise be absent from the exhibition.

More importantly, however, digital media provide tools for exploring the concepts behind ‘Carrying Coca’ in more depth. As with many anthropological exhibitions, it demands that the viewer to consider material objects through an unfamiliar world-view. In ‘Carrying Coca’, we will ask visitors to conceive of how an apparently unassuming object, comparable in shape and size to a handbag or purse, could be a vital conduit for relationships between individuals as well as between people, nature, and the gods. Further, these are relationships that exist simultaneously within a single community but that shift across space and time. Immaterial and intangible, these are relationships made material by coca leaves and by the chuspas themselves.  Through digital media interactives the viewer will be provided a more multifaceted exploration into the ways in which these networks of interaction are layered upon one another than the objects themselves can provide.

As this project has matured, it has become clear that conveying the totemic and talismanic importance of chuspas would necessitate both the display of objects and the implementation of digital media in the gallery space. Since the actual space of the Focus Gallery is small (roughly 20 ft. x 20 ft.), coordinating the placement of physical things with the necessary media screens becomes a delicate balance to ensure that the mutual existence of these materials conveys a coherent argument to the visitor.

The use of digital media in exhibition spaces continues to be a field of experimentation and discovery, one that we are particularly invested in at the BGC in the Focus Gallery project. As an institution, we are simultaneously interested in new modes of gallery display and the increasingly important role that digital media play in scholarly discourse. So, the Focus Gallery project, which involves staff, faculty, and students, is a good place for us to experiment with and put into practice new conceptual approaches to the display of material culture and the development of attendant interpretive materials.

One important characteristic of the Focus Gallery project is that it is situated within our academic programs and is a central part of the curriculum. Because of this integration of exhibition development within a curricular model, we can more readily highlight process over product as part of the education experience. Exhibitions, much like theatre, are process-oriented from start to finish, with even the seemingly static post-opening exhibition requiring surveillance, maintenance and ultimately disassembling. The goal of Focus Gallery coursework is therefore to involve students in the creation of the exhibition, so that their experience in the classroom more closely simulates the type of work done in the professional field.

Unfortunately, exhibition making rarely parallels exactly the time constraints of academic calendars, and the full range of work that needs to be done to put on an elaborate exhibition never falls neatly within a twelve-week semester schedule. As such, we search for ways to reaffirm the sense of process by involving students in portions of Focus Gallery projects that can convey the procedural nature of these projects without necessarily being dependent on the schedules of the more challenging periods of exhibition development. The conceptualization, prototyping and elaboration of digital interactives is a way to interject into Focus Gallery tutorials a creative and constructive experience, and affords students the opportunity to participate in a portion of exhibition making that goes beyond research meant for traditionally textual ends such as the catalog, labels or wall texts.

As interactives have come to play an increasingly important role in gallery spaces and museums, we are constantly looking for effective ways of implementing complex hypermediated digital media alongside material objects and within the larger designed environment of the gallery space. As the Focus Gallery project has progressed these interactives have grown increasingly complex and often add not only multimedia resources, but alternative paths of intellectual inquiry into the objects in the gallery and the narrative of the exhibition. Although they are carefully designed with very material realities in mind, the conception and creation of the interactives can exist outside of such spaces and removed from the complications that arise from working with rarified physical objects such as the chuspas or even contested materials such as the coca leaves. So, we have begun to give students in our gallery tutorials a larger role in conceiving of and designing just how these interactives will work in the exhibitions. Beginning with written concept proposals and then moving from rough prototypes to more refined and detailed visual representations of their ideas, students are asked to recontextualize their previous research and knowledge of the materials in a different medium than they are often accustomed to.

This structure accomplishes a number of goals. First of all, it immerses the students in a practice of design process that is different from traditional modes of knowledge-building in the classroom. Through experimentation, iteration and critique students learn a different way of ingesting, interpreting and relating information. This procedural experience will ultimately provide them with a more complex way of thinking about how different forms of knowledge dissemination work, and how their choices as authors (broadly defined) are different under different circumstances. Secondly, it forces them to look at a familiar set of information from a different perspective. How does that material make sense on a screen? In what ways is an image or video more or less powerful than a familiar text read in a book or article? This reiteration of information provides them the opportunity to think critically about how context shapes interpretation and how media can define that context. Finally it forces them to think creatively and expressively rather than simply analytically.

While we have experimented with interactives and interactive design as pedagogical practice in earlier Focus Gallery projects, ‘Carrying Coca’ is the first project and series of class tutorials where we have explicitly considered the investigation of digital media as central to a rigorous exploration of the complex concepts and ideas that circulate in these kinds of projects. The cultural, historical and legal particulars of coca leaves and chuspas demand an explication of networks of human interaction that can be difficult to achieve through objects, wall text and catalog entries. The rich and complex interactives that are made possible through digital media allow us to create for the visitor representations of the many layers and connections that are challenging to  convey with the physical object.

With this understanding of the clear value of the digital media and their particular situation in the ‘Carrying Coca’ project, it became apparent to us that this would be the ideal opportunity to practice the design-based pedagogical methodology described above. As we write this, we are awaiting the students’ first written proposals and are eager to see how they envision presenting the networks surrounding chuspas to gallery visitors. This process is new to us as it is new to them and we are excited to see how the class is able to develop systems of understanding that will more comprehensively capture the stories we are trying to tell.