Paul Pridgeon in Arlington, Massachusetts sent in to the Found website a to-do list that he picked up off the street, giving it the title “There Are Options.” What once served as a lonely individual’s list of possibilities for passing the time (“Go for a walk with someone, go out with someone…Go to the cemetery and talk with my mom…Go in my room”) is repurposed and given new meaning as a poignant slice of someone’s inner life. The forum discussion for this post is exemplary with regard to the compassion that can be expressed among those with a shared experience. Strangers, pseudonymously, virtually, extend themselves to one another emotionally. 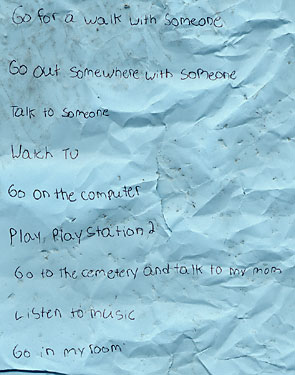 With the end-of-the-century therapeutic culture transforming into a culture of confession, online anonymity allows individuals to voice needs, concerns, fears, and ideas detached from one’s own identity. Much online public interaction involves participation in virtual communities: cyber-groups based upon people connecting with others who share similar values, interests and concerns in order to exchange information, gain companionship and provide emotional support (Wellman and Gulia 1999). However, artifacts exhibited on Found’s website can serve as conduits for relationships between audience and others, rendered through the nearly visceral representation of digital objects, without access to the creator’s intention or the categorization of a particular theme.

Found began when site creator Davy Rothbart discovered a note, intended for someone else, on the windshield of his car. The note, described on the website (http://foundmagazine.com), as containing an “amazing mixture of anger and hopefulness,” was passed among Rothbart’s friends. Interest in this found object led to the creation of a magazine that could serve as a forum for sharing similar “finds.” Each day, a new found object is posted on the site, typically a note or photograph that is lost or discarded. Found encourages visitors to submit “love letters, birthday cards, kids’ homework, to-do lists, ticket stubs, poetry on napkins, telephone bills, doodles—anything that gives a glimpse into someone else’s life.” Found items are sometimes poignant, sometimes funny, always giving a sideways glance into someone’s interior world.

The value of the seemingly intimate, hand-made, misplaced, or discarded item increases exponentially as it is shared through Found’s digital platform. Because the visitor to Found has no existing personal connection to these artifacts, meaning and connection is produced in the exchange between the viewer and the digitally present image. As John Berger points out, “We never look at just one thing, we are always looking at the relation between things and ourselves” (9). When what we are looking at are the expressions of other people’s inner lives, we also are participating in the relation between ourselves and others. The digitally present object—list, photograph, or note between friends—serves as a conduit for that relationship. Berger’s point, however, is that looking inevitably involves bringing oneself to the encounter. Visitors to the site construct narratives around these objects, and the speculative creation of these narratives can be one of the pleasures of Found. In whatever imagined context the audience creates, these artifacts offer a glimpse into the personal and human circumstances of everyday life. Something about the self is revealed or learned, and looking outward is a way of looking inside.

Lists are a kind of collage, comprised of the little bits of wants and needs that make up a sense of who we are through the things we buy or need to do. The lists on Found—what warrants their inclusion as finds—are usually quirky and often show the listmaker struggling with something. Lists help us manage our time, our circumstances, and the emotional weight of our lives. By titling his find “Back to the Old Ways,” Jonathan Shipley posits the list writer may be trying to change her ways; the list includes Diet Coke, water, tonic, tampons, vitamins and “frozen healthy shit,” perhaps the beginning of a new diet. The last item on the list, “Wine?” shows the possibility of a lingering thread of desire for what Shipley calls “the old ways.”

This brief, anonymous list opens an opportunity for women to “talk among themselves” about the social pressures for thinness. Through Found’s online commuity the audience has access to different kinds of lists—those that are made as goals, with contemplation, and those that are made as reminders, easily checked off. Lists are statements of intention, and both the lists of long term goals and quick everyday reminders reflect the gesture of “putting it in writing.”

Many comments in this forum argue that the listmaker's perspective may be more of an everyday way of being rather than an isolated event, as women struggle to balance their desires with a sense of what they feel they should do. One poster writes, “Yeah, if you add ‘chocolate’ then this is pretty much what I live on,” while others add that the list reminds them of a cousin, a sister, or a roommate. “Vanessa in California” offers empathy and advice for the anonymous, and absent, listmaker:

“she’s pms-ing, bloated, stressed out, and she needs to get cute for a date tomorrow night. load up on those diet pills my dear. just maybe skip the diet coke, that is a lot of caffeine...” Vanessa’s direct address shows the evocative power of lists—even those as mundane as shopping lists—to create a sense of the listmaker’s identity.

Posting on discussion boards and participating in online forums is an everyday activity, yet there is always a reason behind one’s desire to post. In the case of Found, motivation may come from the artifact itself, when a reader wants to offer an interpretation or comment on the object. Others may be inspired to post in a forum because of their compassion for the person who created or owned the found artifact, often as an expression of similar feelings or experiences.

Some of the lists posted on Found lead to lengthy discussions that are at times wry, tender, cantankerous, and droll. The list that begins “dump Adam,” found between the pages of a used book, has a casual, offhand feel despite the gravity of its contents. After “dump Adam,” the listmaker includes “grad mufukin school,” “run ½ marathon,” “run 5 5K’s,” “learn spanish, guitar, typing,” “waterfall,” and “Europe.” The contrast between the informal list and the enormity of the tasks leads to a witty exchange on the forum. One poster writes, “poor Adam. dumping him even made the top of the list. I hope he deserves it, and it’s not just part of her plan for ‘an all new better life’ i.e; ‘lose weight, finish school, then trade up to a new better spouse.’” Another adds, “Dont go to mufukin grad school or you wont get any of those other things done!” Running alongside the humorous perspective of these forum posts is a sense of curiosity, as the temporary knowledge community works together to decipher the anonymous listmaker’s desires. A forum poster named Sarah notes that the list reminds her of herself, and that she had accomplished many similar things over the preceding year. She then turns her self-expression back to the purposes of the group: “But unfortunately for decoding purposes the two biggest mysteries—undumpable Adam and the unfathomable Waterfall—were not on my list.” 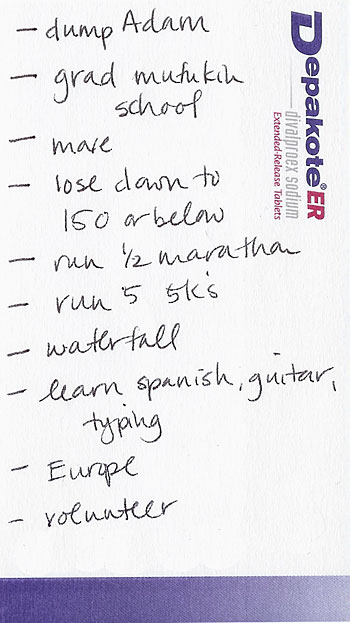 The online commentary surrounding textual and visual postings can mirror a viewer’s critique of a work of art or literature. In that, despite the author or poster’s original intentions, perspectives of the objects evolve with the conversations surrounding it, through both negative and positive forum feedback. The frequent pathologization of listmakers is enacted by the audience’s deliberation over the object through both sentimental and sometimes harsh critique.

Christopher Luna’s find, which he titles “Hide From Yourself,” is a peculiar list which includes “Beat up a pillow,” “Hide from yourself,” “brush hair wrong way” and “pretend you’re on a talk show.” From these unusual imaginings, the idea of a singular self takes form. Cait in New Hampshire confesses that she can relate to the author: “When I was in around 4th grade I would imagine that all the time. Talk to myself, as if I was on Oprah.” What might feel charming and eccentric at first glance is transformed in the forum as posters cast the author as someone potentially suffering. “danielle in flagstaff, az” notes, “this is a list of things to do instead of eating…the things on the list are on lots of pro-ana sites. just a little fyi.” Apparently displeased with danielle’s tone, “your mom in the laundry room” responds, “just a little fyi for danielle in flagstaff, this list sounds to me like things autistic people do.” The foundation of anonymity increases the pleasure of viewing, and allows audiences freedom to express opinions about the objects. 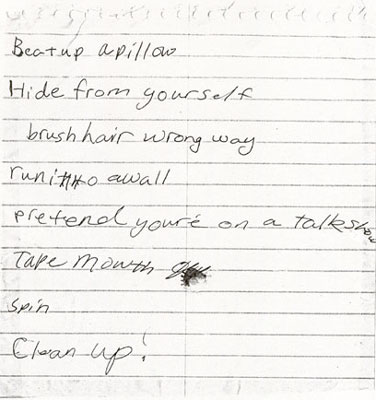 The Found phenomenon has originated from and continues to thrive due to our human need for community and to be understood by identifying with common expression, organization, ideas, and emotions of anonymous others. The everyday nature of lists can reveal something more substantial and significant about their authors. Since the authors of Found lists are absent, their lists often lead readers to turn contemplation back on themselves, allowing us to learn a little bit about ourselves, every day.