For the seasoned social networker, tagging and commenting on photographs, notes, blogs and video clips has become a habitual activity. Websites such as Facebook and Twitter have opened up a broad platform of opportunities for the evolution of commenting; as website users, we almost expect that whatever we are browsing or reading, there will be an opportunity for us to add our comment, to contribute to a debate – be it concerning British politics or the latest photo album upload on Facebook.

In the context of note-taking, the “commenting” phenomenon represents one of many contemporary shifts in the way we now accumulate our ideas. Note-taking as part of creative development is often an extensive and evolutionary process, often undertaken with the purpose of culminating into a final product – an essay, a thesis, a script, an article. The prevalence of social networking, whether through Facebook or through online journals such as The New Everyday means that collaborative, online note-taking is now a common practice that allows others to add to our ideas, sometimes resulting in our own notes and theories evolving in different directions.

Filmmaker Sally Potter first experienced this level of mass online interaction during the making of her 2005 film Yes. She was one of the first film directors to utilise the opportunities offered by blogging and online communication through message boards that she facilitated during the making of Yes. The enthusiastic response to this type of dialogue shown by fans of Potter’s work led to the creation of the Sally Potter online archive - www.sp-ark.org, or “SP-ARK”. The SP-ARK website is a filmmaking archive featuring over 600 digitised assets of Potter’s own note-taking and film documentation of the development, production and distribution of her 1992 film Orlando.

The SP-ARK website provides an insight into note-taking in two distinct ways. Firstly, users of SP-ARK can trace Potter’s own note-taking as her adaptation of Virginia Woolf’s novel progressed from handwritten notes, scribbles and sketches to the final, finished feature film. Through the digitisation of these filmmaking artefacts, the website allows the user to take a nostalgic look at the handwritten note, complete with doodles, jottings and crossings out and trace the development of her ideas. So whilst SP-ARK postmodernises Potter’s note-taking, propelling her work into the 21st century, it also serves as an evocative reminder of the significance of pen and paper in the creative note-taking process.

Secondly, the website provides users with their own contemporary note-taking tool, known as a “pathway”. The pathway feature is unique to the SP-ARK website; it merges the concept of blogging and forum posting, and also allows the user to combine his or her notes and ideas with material from the website itself – effectively creating a stream of ideas with Potter’s original notes embedded within them. 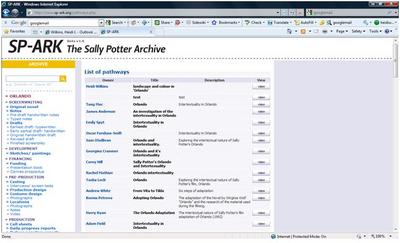 The concept behind this note-taking facility is to create and build links between the archive and the user resulting in a “living archive”, an ongoing interaction with Potter’s work, making the website more than just a reference tool and encouraging intellectual exchange through online note-taking. Furthermore, the pathway tool facilitates social networking by providing users with the opportunity to comment on other users’ pathways, or to send private messages, providing the option of one to one dialogue as well as open discussion between visitors to the website. This further reinforces the concept of SP-ARK as an online community where ideas grow and develop, changing the more traditional view of an archive as a mere reference facility.

Choosing a topic for your pathway is the first step on the SP-ARK note-taking journey. The name chosen for the website is an apt one indeed, since viewing the various archive assets immediately sparks ideas and questions in the mind of the website user – the commencement of the note-taking process. As you accumulate your ideas, incorporating assets from the archive is a simple matter of selecting an item and clicking the “add to my pathway” button, resulting in a mini version of the asset appearing in your own pathway with an “add comment” button underneath – inviting the user to continue on his or her note-taking journey. 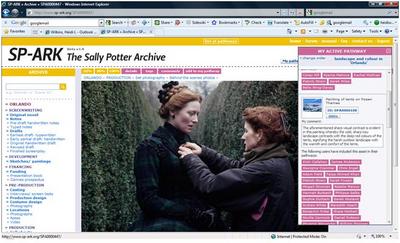 [ A behind-the-scenes photograph of director Sally Potter and actress Tilda Swinton on set of Orlando. The pathway feature can be seen on the right, demonstrating mini versions of artefacts and note-taking in progress. ]

Having the artefacts in front of you allows your thoughts to be noted down immediately, and the fact that your notes can be saved means that you can return to your ideas and allow them to evolve as part of your pathway. Through the incorporation of this note-taking tool on the website, there is the sense that the user – through note-taking – increases the significance of the already valuable items featured on SP-ARK by adding their personal notes and ideas. Furthermore, when adding an asset to a pathway, the names of users who have previously incorporated this asset into their own pathways are shown – allowing access to the note-taking of others and further facilitating the social networking aspect of the website by encouraging the user to observe the ideas of others and potentially engage with them.

Of these strategies, SP-ARK pathways are closest to concept mapping, but they effectively combine such a mapping practice with graphic organising and potential for elaborative outlining, at the same time preserving a level of simplicity that these other strategies frequently lack. The Internet context enhances note-taking practice with unprecedented usability: studying film by creating online notes in a pathway “notebook” was applauded by students at Queen Mary, University of London, who have utilised SP-ARK and its pathway feature as part of an undergraduate course on adaptation. This project involved the students exploring the archive assets and creating their own pathways about Potter’s adaptation of Woolf’s novel. The students commented that the pathway tool was innovative, simple to use, and most of all, an effective note-taking tool due to its linear structure. The students explained that this type of structure is most effective for essay planning since it allows for a step-by-step accumulation of notes which then become a detailed plan, and in this particular task, formed the basis of their assessed essays.

For teachers of film production and film theory, the SP-ARK website has the potential to create an online teaching and learning environment where teachers can see their pupils’ ideas developing and also observe peer interaction that is taking place via the pathways. Using the website as part of his teaching, Dr Charles Drazin (Queen Mary) found that the pathways “facilitated the provision of on-going feedback as students worked on their assignment in a way that is not feasible in traditional coursework.” He added that the pathway feature of SP-ARK “is at the core of what is valuable and innovative about the site” precisely for its note-taking opportunities by allowing his students to build their ideas around the assets in the archive and create a living and ongoing discussion about them.

Most importantly, perhaps, note-taking in this way establishes a particular set of relationships in history, reorienting our understanding of the past and the future. Vicki Callahan of UW-Milwaukee and USC refers to the pathways as allowing the user to leave a “research trail” that simultaneously immerses the user in the archive artefacts, yet also – through note-taking and collaborative note-taking – creates new historical artefacts since the commentary and discussion about each archive asset remains a permanent feature of the site.

With such positive feedback from a wide range of users, the creators of SP-ARK have found themselves asking, what next? The pathways feature provides clear opportunities for social networking, and in this context, a significant form of modern note-taking that can actively contribute something valuable to discussion between film scholars. Yet much feedback requested further features, such as the option to make notes confidential if being used for formal assessment or private research, the ability to view multiple pathways, the option to export notes from pathways into a Word document and the opportunity to create group pathways. 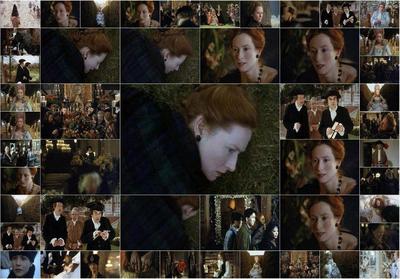 [ An example of the image browser software. These film stills from Potter’s Orlando are linked through their physical properties such as colour, allowing the user to link key frames from the film through similar characteristics. ]

Furthermore, a new image browser facility, developed by the University of Surrey, will give SP-ARK a modern aesthetic quality whilst maintaining the key concepts of user involvement and the further development of the online Sally Potter community.

In an age when various forms of digital note-taking are prevalent through devices such as laptops, smart phones or e-book readers, the fusion of social networking with online note-taking offers a unique learning platform within the academic domain. Sahari, Hisham Nik Suryani and Marzuki have asserted that “The very act of taking notes activates students' participation in meaningful learning; they become active learners since they are giving attention to, or rather interacting with, and jotting down the incoming information.”[fn value=1] Sahari, M., Nik A. Hisham Nik Suryani and Marzuki, A., p. 61[/fn]

The effectiveness of an online note-taking tool that can be utilised by students, teachers and researchers, demonstrates one of the ways in which modern technology can assist not only participating in online interchange, but also how effectively these note-taking devices are capable of creating “active learners”.

The opportunity for worldwide interaction within an academic domain adds another, exciting dimension to the modern concept of note-taking. However, as is often the case with online communities and social networking, the issue of regulation is one that emerges. The moderation of user input is a challenge for any website that encourages user involvement and one which poses questions about overreliance and trust. However, I would assert that discussion and interaction is one of the underlying features of academia and these types of online teaching and learning platforms add another way in which students can engage with peers, teachers, academics and other users who share common interests. The danger of placing too much trust in interchanges with unfamiliar users is equivalent to the care and common sense we must all take when communicating with those we do not know personally. Within the concept of note-taking, I would assert that when used sensibly, online tools that create new opportunities for the accumulation of notes and ideas, should be embraced, yet acknowledged as just one of many ways that creative note-takers gather their ideas.

For me, this brings to mind the distinction between public and private notes, social vs. confidential process.  With tools such as SP-ARK, the user has to be willing to expose more than the product.  The commenter, too, has to be willing to think publicly.  Yet, even here, I took private notes as I read the article, and privately organized those thoughts before posting.  Perhaps this type of public, social forum helps to ease those of us who prefer to work privately to bring forth our own process to the eyes of many, to make public those fleeting and perhaps discarded thoughts.  Does it make editing easier to know that the audience will see the process?  If I used SP-ARK would I be more willing to throw away my box of post-its and scribbled memos, or delete my file of Word documents filled with multiple versions of the same passage using the "track changes" feature?  Or would I, in –turn, desire to scan and “publish” every piece, in hopes that others may find within them the real message, the real idea?