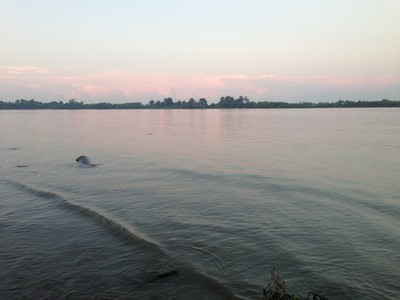 Lately I’ve been taking regular morning walks to the Mississippi River, which flows about five blocks from my home in New Orleans. I generally go to one particular spot, a big sweeping curve on the river. While technically I head to the river to fly fish, I am always struck by the variety of things I find washed up or creeping on the bank—as well as the things drifting by on or swimming in the water itself.

In this brief essay I want to think about some of these river things, to create a very partial inventory, and along the way to puzzle over some of the spatial and medial spurs attached to these things.

So, to begin with, a short list: millipedes, a message in a bottle, butternut squash, shipping containers, an oil tanker, an airplane.

Mark Twain writes in Life on the Mississippi that the river “is always changing its habitat bodily—is always moving bodily sidewise.” Twain is referring to the ways that the river can move gradually, over years, across flatland—as opposed to the "prodigious jumps" of when oxbows are suddenly cut-off by a shorter direct path.

This bodily motion sideways also takes place on smaller scales, as the river level rises and drops on daily, weekly, and seasonally. The river bank pulses with transitional life—with herons, wild cats, and myriad insects that move deftly in the variable space between the water and the riprap. I notice this as I am sitting on a rock tying a clouser minnow to my line, and I see dozens of millipedes crawling between stones, shells, and broken glass. I think they are going after the tiny green willow and grass shoots that have shot up since the water level dropped a couple feet. I sit there transfixed by the micro-geography and these small creatures who are navigating it. I am eager to look up these anthropods on Wikipedia and find out more about them, later. They run sideways into the internet, along with most other things. 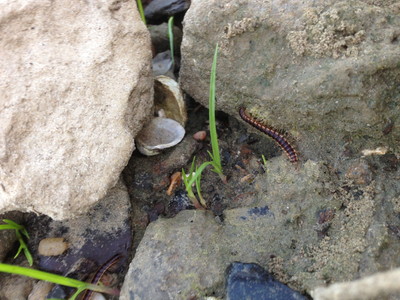 The sideways habitat of the river extends to other weird things. I see a vodka bottle on the wire webwork holding back the riprap; it has a piece of notebook paper inside, rolled up. A message in a bottle! What might it be attempting to communicate, what secret hides inside? I don't open it, I don't find out—in part because it has already communicated enough, by being a 'message in a bottle'. I assume it is an ironic message, whatever is inside. The river served as a medium for this concealed yet communicating form. The bottle's irony, its cliché, moves sideways even as it rests, closed, and the river flows on a few feet away. 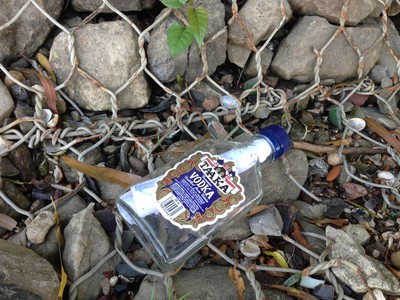 One day the bank is littered with butternut squash. Not just old husks or rotten pulp, but beautiful, plump, risotto-ready ripe fruits, all long the river's edge. I am half-tempted to take one home and have it for dinner. My friend Tom Beller at Tulane likes to joke about how, as an English professor, he has a certain fantasy of arriving home with a complete meal for his family—as if to show that abstract, scholarly work can result in real tangible things like food. My mind drifts sideways to Tom as I admire the squash, which by their soaked but intact labels I can tell had fallen off of some boat en route from Honduras. 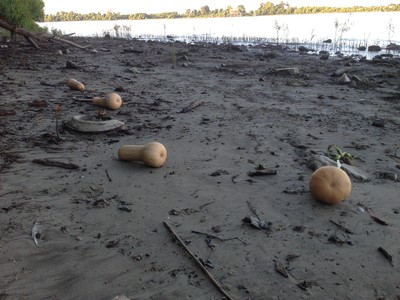 Across a mud flat, I see some shipping containers that have drifted into the bank, and appear to be stranded, beached. They seem to be made out of industrial strength cardboard, with thick plastic straps around them. I walk out on a telephone pole that has likewise washed into the bank and is stuck in the mud. I cannot get close to the boxes, though—the mud's sucking power is incredible, and at the end of the telephone pole (yellow poplar or Liriodendron tulipifera, I believe), I cannot go further, as my feet are instantly pulled down into a horrifyingly tacky and solid abyss. These things, the boxes, sit so close and yet are so far, inaccessible and impossible to get at (at least for me, for now, without telephoto lens or pirogue). All I can do is wonder about their mysterious contents, and if they fell accidentally off a boat or were forcibly pitched into the water and thereby extending the mystery. I cannot look up these boxes on the Internet; I cannot scan or search for them on my phone. I can barely get a picture of them. I make my way back to the solid ground, gingerly balancing on the shorn tree trunk. 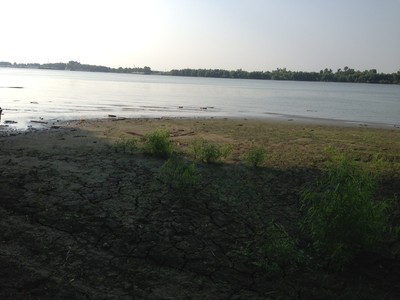 Later in the morning a tanker churns by, pushing up a wall of water from its bow and leaving a wake that disturbs the already disturbed bank. Now this is something that I can track: I pull up Safari on my phone and go to the site shipspotting.com, and punch in the name on the hull of the ship, EAGLE TORRANCE. I can see that the crude oil tanker hails from Singapore, and was built in 2007 in Mihara, Japan. I glimpse a tangle of geopolitics, resource extraction, and industrial transportation lying on and escaping the small screen of my phone, and simultaneously traveling past me, heading upriver. 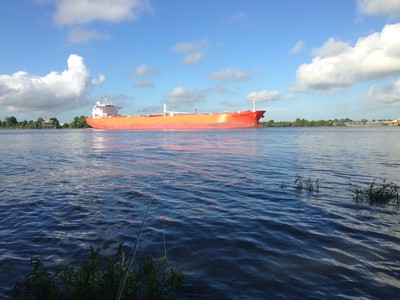 Then there is a loud rent torn across the sky above me, and I look up to see an airliner banking over the river on its final descent to Louis Armstrong International Airport. 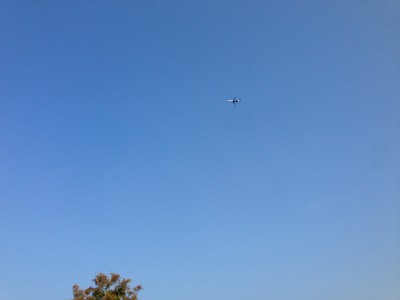 This, too, is something I can access by my phone: I quickly toggle to a new safari window and pull up flightaware.com, and "use my location" to retrieve a radar map with live flight lines over southern Louisiana. From there, I select the AirTran flight—just by looking up I had identified the teal colored tail and the T shape of the Boeing 717, a rather unusual model aircraft for U.S. carriers. I see that the flight originated in Atlanta, and is one minute from touchdown here at Louis Armstrong. 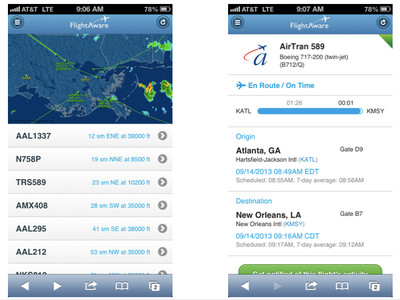 I wonder how much more detail I can discover about this particular flight. I think for a moment. Perhaps someone has tweeted about this flight; I go to Twitter. I search for AirTran and find their handle. But here, like in relation to the half-submerged cargo boxes, I find myself stuck. 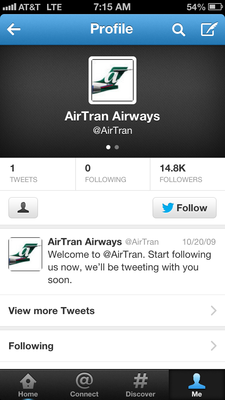 There is only one tweet: "Welcome to @AirTran. Start following us now, we'll be tweeting with you soon." The date: 10/20/09. I'm stuck, again—not so unlike the distance between me and the cardboard boxes in the mud. More than 14,800 people have 'followed' AirTran over the past four years, with some hope of airfare deals or airline updates, gripes or compliments to communicate; but this handle is all but defunct, an aborted beginning to the promises of new media networking. Meanwhile, the 717's rear engines' roar fades as the plane makes its final turn toward the airport.

Here on the river bank I am surrounded by things moving past me, or stuck—taken together, it is a widening circle of objects that offer enticing points of entry or mere dead ends. In his long meditation on the Mississippi, Mark Twain extends his assertion to read "about" the river, and even describes the "face of the water" itself as a "wonderful book." Here I've followed this impulse, but also lingered on the weird margins of this book, where meaning falls away, present but obscured. I like reading this book, but I also like discovering its limits, in multiple forms. I'm moving bodily sideways, with the river, capturing things and letting things slip through, at once.