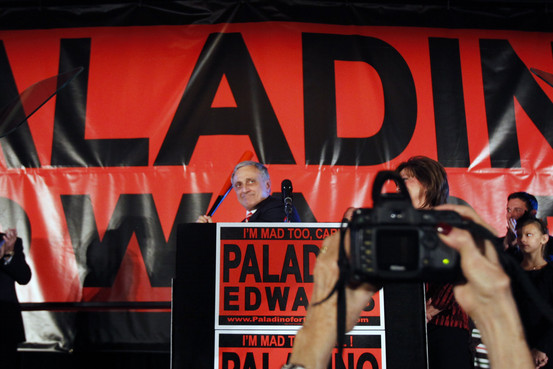 Just moments after the polls closed in New York State, Carl Paladino, the Republican candidate for Governor, took to the podium to deliver his concession speech to now Governor-elect Andrew Cuomo. Armed with a bright orange baseball bat, he growled that he had promised to take a baseball bat to Albany… that the bat was his metaphor for the people and that now Cuomo could take the bat with him or ignore it at his peril. Posing with the bat – and he was certainly posing for the camera – he threatened rather than congratulated Cuomo with a menacing, bat-wielding stare. This was not a concession, this was an aggressive and explicit threat.  However, while Paladino’s “Mad as Hell” routine may have allowed him to roll over Rick Lazio in the Republican primary, it did not play well with the majority of voters in the Empire State. He lost by almost thirty points; few New Yorkers, it seems, wanted to be the bat.

Indeed, the bat seems like an odd metaphor employed in this way.  This is a thug’s bat, not a child’s toy or an emblem of America’s favorite pastime.  Paladino’s loss was a bright spot for me on a devastating election night. His politics of anger may have been a successful early rallying cry for the Tea Party, but it was not a winning electoral strategy. Similarly, Sharron Angle, Christine O’Donnell, and Linda McMahon all lost their bids in part, I think, because they could not articulate platforms beyond the bat or the batty.  Yet one third of Tea Party candidates, many with more fully articulated platforms than O’Donnell, Angle, or Paladino, did win elections in other states in campaigns often funded by a handful of behind the scenes billionaires.  These are the aggressive and explicit threats we need to take seriously. This isn’t crazy Carl with a baseball bat or Christine O’Donnell with a broomstick.  These mad-as-hell candidates – and their wealthy patrons – may very well succeed in overturning the health care bill, passing laws for fetal personhood, and further paralyzing the Democratic Senate and the Obama White House.

In the past few days a number of people have sent me the link to the website http://whatthefuckhasobamadonesofar.com/.  Each time you visit the site it lists something that the Obama administration has actually accomplished. These include achievements such as “Signed the Family Smoking Prevention and Tobacco Control Act, giving the FDA the authority to regulate the manufacturing, marketing, and sale of tobacco for the first time”; “Appointed more openly gay workers to government positions”; and “Signed the Lilly Ledbetter Fair Pay Act, restoring basic protections against pay discrimination for women and other workers.” Most of these statements end with the tag line, “Big fucking deal, what else?”  But these are big fucking deals.  However, they’ve been lost in the media hysteria over the Tea Party and its followers.

It is time for the left to get mad as hell and to fight back, not with baseball bats but armed with the rhetoric that articulates legislative accomplishments that have improved the lives of middle class and working class Americans.

I can't help thinking about the broom handles used at Abu Ghraib, the truncheon used on Louima, the continuing upsurge of homophobic violence. Somehow, the baseball bat is becoming a 'dog whistle' for homophobia.