There’s no question that crowdfunding offers people access to money for creative means. What gets talked about less often is the risks of crowdfunding. While some academics attend to the economic risks, I am interested here in discussing the social, emotional, and physical risks of crowdfunding, especially in an academic setting. I have worked with students and other academic professionals to crowdfund a variety of projects, and while I still believe in the promises, I am aware that capital is high stakes and should be thought through carefully

Crowdfunding works in many cases because people leverage their own social capital; that is, they use their authority, their institutional affiliations, and even their popularity to convince people to fund their projects. Yet problems become apparent when we ask students to crowdfund educational projects. For example, I had one student who volunteered to do fundraising for the men’s glee club to send the group to the UK, and she thought that crowd funding would be a good method. However, she struggled to make her funding goals and had to constantly push reminders to her social network, creating fatigue and even ill-will among her personal social networks.

Crowdfunding can raise capital for creating new projects, and really successful crowdfunding can even provide stretch goals—“you give us this much extra money and we can do this extra thing.” The problem when working with student groups hoping to crowdfund their projects is that the promises made to investors often exceed the limited timeframes placed on educational projects. For example, I had a group of students who created a computer game for their senior thesis. A masters student then collaborated with that group to finish and launch the game. They crowdfunded the game for $10,000 and achieved their first stretch goal as well. What we didn't account for was the amount of time needed to record and send rewards (those small gifts sent to backers)—a time sink with little educational value—nor did we consider the fact that the group is still working on the game, developing for stretch goals, one year after everyone finished the educational portion of this project. Functionally, it is like a one-year hangover for all of us (I am still acting in my advisor capacity for this group, yet this work does not appear on my annual work reports for my university, and the young men are trying to balance fulltime jobs with the demands of this project).

This one’s a doozy. When people enter public discourse, especially when addressing socially volatile content, they are opening themselves ridicule, attack, and even the threat of physical violence. Crowdfunding presents an interesting forum for these types of vitriolic public discourse. Those who want to crowdfund projects that touch on hot topic issues are often immediately attacked in comments, social media, and directed emailed simply for the promise of what they will create or say. Consider the highly publicized case of Anita Sarkeesian, who graduated with her MA and decided to become a public intellectual on Feminist Frequency. She decided to crowdfund a series of short videos entitled Tropes vs. Video Games, which would explore the ways in which women are often detrimentally portrayed in games. Sarkeesian was suddenly attacked in the comments, via twitter and emails, and even via a hacked Wikipedia page (see sample comments below). 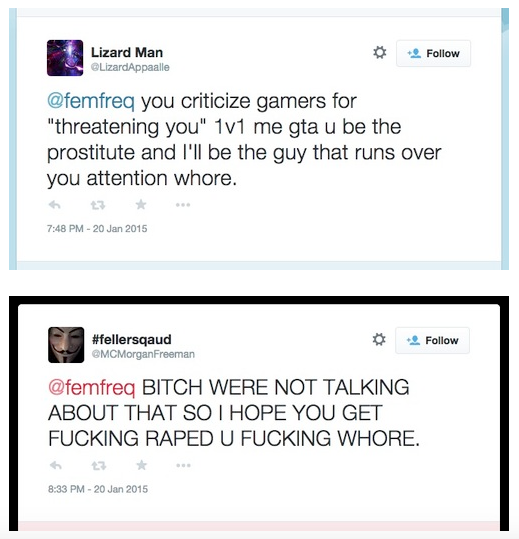 While Sarkeesian firmly situates herself as a public intellectual, other academics and students likewise open themselves to ridicule and verbal abuse. Carly Kocurek and Allyson Whipple, for example, crowdfunded their game Choice, Texas, an empathy game that explores reproductive choices and pressures through the narratives of five different women from different cultural and socioeconomic situations. Almost immediately, the designers began getting emails and comments that threatened them generally, and more scarily, some commentators indicated that they knew where one of the designers worked (public knowledge for academics who have office locations and hours published online). 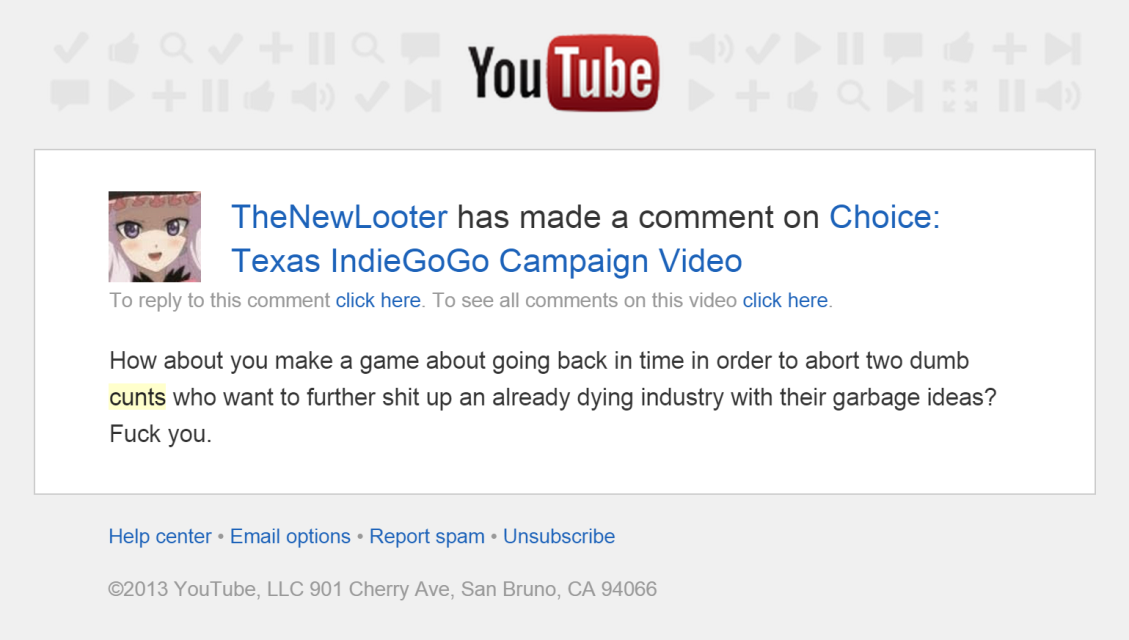 The toll of these types of comments cannot be overstated. Crowdfunding opens up people to both investors who want a project or product and to those who would fight against that same thing. And while it is unlikely that trolls from the internet would actually physically hurt someone, the point is that they might. We have ample and shocking evidence that people react violently when projects threaten dominant ideologies, from the Santa Barbara shootings to people being stabbed at gay pride parades.

This is not a think piece that warns people off of crowdfunding. I still believe in this platform to get projects done, to teach students about market viability and demand, and to open democratic support of great ideas. I hope that people go away with a way to think through the risks of crowdfunding and think through ways to mitigate or address these risks ethically and in the interest of everyone’s wellbeing.

It is certainly worth noting the differing sorts of risks that come with crowdfunding, especially in the means that many don't think about those risks. Once the transaction of giving the project money has been completed the participant doesn't typically think about what happens as the campaign is still ongoing. What was certainly interesting was the addition of the crowdfunded game, Choice, Texas, as it has been used as an example for one of the other responses to this survey, so being able to visualize the 'other side' of crowdfunding that we don't see within that subject was interesting and very eye-opening.

You've also brought up the, potentially, seldom thought of point of the project and those that are creating it to open themselves up to the public in a way that many may not seem could potentially create backlash. Though within academic topics aren't protected by those means, nor does it constitute any negative backlash, it does open the waters for communication within the topic that is created. While currently enrolled in a class that speaks about Social Capital in many forms the portion that was brought up about the struggles to use that social capital to bring in more backers for a project is certainly something that has come across my social media accounts in increasing numbers as the popularity of crowdfunding sites increased and the riss involved in that area is a very big one.

There are certainly a lot of factors to think about when it comes to crowdfunding academic works.

Jennifer, thanks for this post. You reference Carly Kocurek and Allyson Whipple's crowdfunding campaign and echoed Carly's own experience with verbal abuse that occurred as a result. And certainly, Sarkeesian's story has been well publicized which has only drawn more threats from the male gaming community. While this registers as a high, if not the highest, concern associated with crowdfunding academic projects which may aggravate particular segments of society simply by virtue of the research question explored, I wanted to discuss your risk #2.

I like that you bring to light the pedagogical opportunities and difficulties which can arise, such as time constraint. Digital culture is a deserving topic of study and I think assigning students to establish crowdfunding campaigns is a great way for them to learn the realities of navigating a landscape which is becoming increasingly more ubiquitous for various professions. The task of increasing visibility across multiple platforms and inspiring would be donors to donate is applicable on many different fronts. I could easily imagine such assignments becoming more common for public relations classes, as we all as business, marketing, and the digital humanities of course. I think it would also be useful to address neoliberal culture which certainly necessitates the need for crowdfunding in academic culture, and other areas as well. Letting students be exposed to the various cultures through the process of crowdfunding would be very useful. What positives came out of this process for your students? What do you think they learned?

Jennifer deWinter’s post calls on us to “think through the risks of crowdfunding and think through ways to mitigate or address these risks ethically and in the interest of everyone’s wellbeing.” I’d like to start that thought process.

As I consider more traditional fundraising processes like grantwriting, I’m reminded that writing a grant is only the beginning of the process. Managing the grant is the far more time-consuming and long-lasting project. When we teach grantwriting, we don’t focus solely on composing an effective proposal; we write into the grant the time and remuneration required for managing the grant once awarded. As we consider crowdfunding efforts, similar composing strategies might be employed. The management of funds raised is equally important to the raising of the funds itself, and our rhetorical approach to both can be integrated into our crowdfunding pedagogy and praxis. Rather than viewing the long-term time investment as a risk, perhaps we can reframe the investment as an opportunity for teaching and learning. When de Winter describes the “time needed to record and send rewards” as “a time sink with little educational value,” I wonder if the time and effort could be rewarded, even remunerated, as an educational and professional experience. The process of following up on gifts given is a key aspect of philanthropic management and provides a unique opportunity to teach the skills of fundraising and fund management over the life of a project. Fundraising, whether crowdfunded or otherwise, is a project that requires time and effort over the life of the project, from planning the proposal to raising the funds to completing the project and reporting on its success (or failure) to donors. At stake are issues of value: to what extent are donations valued, and the donors behind them? To what extent are the efforts of fundraisers themselves valued? And what about de Winter and the value of her work sponsoring this group, work that should be recognized by an employer? Crowdsourcing is not a simple act of getting people to give petty change. Rather, it’s the tactical implementation of a combined academic and marketing strategy, a quasi-professional fundraising activity with all the ethical management and reporting responsibilities — and time and money required to accomplish those tasks — written into the fiber of the project.

As deWinter notes, “This one’s a doozy.” The ad hominem attacks flung across multiple channels during this very active and early national political season are evidence that crowdfunding is hardly unique in the vitriol it can attract. Neither our students nor we deserve the deeply insulting and violent responses de Winter depicted. One path that might prove less daunting relates to tapping our scholarly and professional networks for crowdfunding efforts. While the social aspect of crowdfunding implies, even relies, on the unpredictable ways that word of the effort get passed around our close and extended networks, starting within a perceived safer, more restricted social circle might be a starting point. Recognizing that funds are likely to be fewer from such circles becomes part of the planning and strategy for the fundraising effort; perhaps the projects sees fewer dollars raised, but the academic circles that raised the funds might be more supportive of the effort in ways that build on, rather than burn, social capital.

What we do in the social sphere gets out and beyond our immediate control. That’s the experience of a social life, hardly unique to social media or crowdfunding efforts. Using a crowdfunding effort as a teachable moment for audience identification and selection, for drafting a fundraising plan that includes implementation costs and fund management through the duration of the project, and for developing ways to recognize valued efforts and reward them through implementation, are ways to mitigate some of the risks that arise when using crowdfunding platforms for academic fundraising.