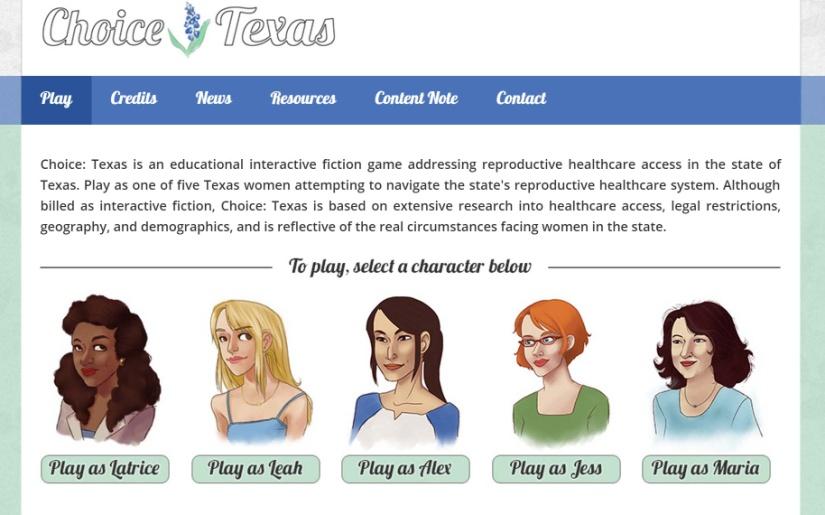 When my friend Allyson Whipple and I first discussed developing a game based on reproductive healthcare access in Texas, we imagined something small completed in our off hours with no real plan for distribution. But, as the idea developed, we realized that we couldn’t do the project justice without resources and skills we didn’t have. Because the game was on a contentious topic, excluding it from many funding options, we turned to crowdfunding through Indiegogo.

We had a successful crowdfunding campaign, raising over $10,000 to finish Choice: Texas and attracting media attention from high-profile outlets like Fast Company, Jezebel, Polygon, and Al Jazeera America. We got some hate mail and some incredibly nasty comments, but that seems to be the cost of being a woman who is at all visible online. Crowdfunding allowed us to complete a project that we could not have done otherwise. It also provided a platform for building and maintaining an audience for the game.

But, crowdfunding is also a significant amount of work, most of it invisible—I spent, for example, dozens of hours managing the production and shipping of the various perks for contributors, and we both spent days contacting people, talking to press outlets, and doing everything we could to promote the campaign. We got the money to fund our project, but it was hard won, especially considering that our production budget didn’t allocate payment for either of us (we paid everyone else who worked on the game).

Crowdfunding made sense for Choice: Texas because it was a project that we likely could not have funded otherwise. But, that lack of funding availability doesn’t mean we didn’t have a good idea or a good team, rather it reflects the dearth of funding opportunities for creative and experimental work. We made a successful game on a shoestring—the “real cost” of the game once all labor is accounted for is easily four times what we spent on it—but we also put ourselves in a position of completing months of unpaid labor. Crowdfunding can seem to offer a solution for the lack of compensation for creative work, and sometimes it does afford creative people the resources, including paid time, to complete projects that would otherwise not be possible. But, the possibilities are limited by popular perceptions of the value of creative labor. Had we asked for the real cost of producing Choice: Texas, the campaign would have failed, and so like many people faced with the question of whether to wait and hope for better funding options in the future or to forge ahead with a passion project you know will go largely uncompensated, we forged ahead.

This is not to criticize crowdfunding so much as to point out the degree to which the realities of crowdfunding are shaped by greater cultural and economic problems. Crowdfunding creates opportunities, but it does so by manufacturing popularity contests and asking us to leverage our networks for concrete financial gain. I remain grateful to everyone who contributed to Choice: Texas and pleased with the game we were able to produce, but I am also aware that much of what enabled that production was our willingness to invest hundreds of hours of our own time and our ability to rely on the strength of our networks, carefully cultivated over years of professional and community involvement.

Carly, thank you for your contribution. What I took from your post first and foremost was the reference to the unseen labor associated with crowdfunding which is generally left out of the celebratory rhetoric that often frames the process. Also, you make mention of the actual costs involved in your project versus the amount of money you asked for. I've crowdfunded myself (my project was a personal art project outside of any direct academic interest) and I can attest to what you describe. Although, what should we make of this necessary, but in some ways, unrelated labor? (Unrelated in the sense that it exists outside of the actual goal of the campaign) Does the need to "manufacture popularity" distract from research methods or processes in a meaningful way? I wonder if you found or Allyson found yourself immersed in discussions that had nothing to do (in the direct sense) with the main goal and purpose of this game? The freedom afforded to those who crowdfund and rely on channels not supported by institutional frameworks which uniquely burdens the research process. The combination of marketing and rigorous research certainly necessitates, or substantially benefits from, two different forms of knowledge (crowdfunding consultants are a thing).

While speculative, I could imagine the balancing act needed to run a successful campaign centered on academic goals, together with the increasing difficulty to acquire funding through institutions themselves, could initiate a shift that falls into a neoliberal trap transforming this process into "common sense" or a process justified (constrained) by market logic. To be sure, mentions of neoliberalism underscore this whole discussion and I don't mean to shy away from more nuanced analyses. Although, I do think these developments work against more rigorous engagement that would otherwise be free from external distractions. Thus, should we be concerned that crowdfunding could leave research vulnerable to neoliberalization (i.e. a continued reduction in funding in the wake of new access to funds which remove risk from institutions), a less rigorous attention to methodology, as well as an altering of an approach to research due to the recognized need for "popularity" which is necessary for a successful campaign?

Carly, I think that you are very spot on when it comes to the portions of crowdfunding that most people don't see, how much work that goes into it. I'll admit when I first heard of it that I thought you give them money, you get the perks, whatever it is you've funded gets made. It wasn't until I had participated in a few crowdfunding projects myself that I realized why there is such a push for digital or non-tangeable items are given away as the 'prizes' for the campaign; the cost for shipping as well as potential creation of them. Not to mention, as you have said, the work that goes into the promotion of such projects.

However, as you have also mentioned there is academic value that can come from it. Not only the fact that there are more people you can reach out to who may be able to help more with said campaign or project that is being promoted, but also extending a reach of something others may have not known they wanted to learn more about. There are numerous positives that can come out of it and awareness is certainly one of them.

David has touched on many of the thoughts I had as I read through your post, Carly. To echo, I appreciate your focus on the unseen labor of crowdfunding. Honestly, though, and not that David draws a direct analogy to any extent, the labor of crowdfunding as relates to academic research versus, say, an artist’s next album is, I think, very different. Regardless, David’s point about the labor of “manufacturing popularity” potentially becoming a distraction, indeed, raises a concern for the academic researcher.

While academics are technically employed for the labor of their research, and some for their teaching, we know that the compensation for such labor is rarely commensurate with the volume of the labor itself. And, it’s redundant to state, but academia has notoriously glossed over, overlooked, and/or neglected to recognize, credit, and/or compensate all kinds of labor, especially insofar as women’s labor goes.

That all said, I find myself wondering whether or not there’s any probability that (crowd)funding one’s own research becomes an expected part of the methodology of some projects. Just thinking about that is exhausting, as the research process itself, though rewarding in many ways, is also often exhausting and, of course, labor-intensive.

A related aside...a MediaCommons tweet was just favorited by Crowd Assist, one of the crowdfunding consultants to which David alluded. Hey, I wonder what it would look like to account for marketing and management fees into the overall cost of the research, essentially asking funders to help cover this fee as well. Maybe this would free up researchers reliant on crowdfunding to focus on their work and not be distracted by managing what amounts to another project in and of itself in some cases.