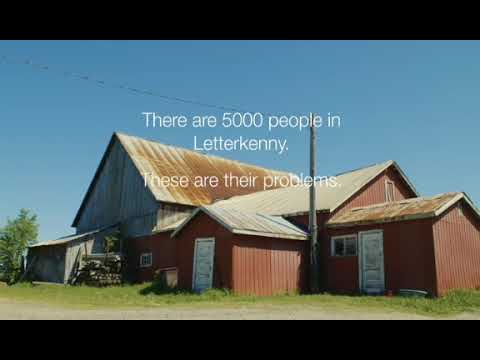 “That’s small towns in a snow globe for yas. We might bickers with each others on the inside, but if someone from the outsides comes a knockin’…”

Letterkenny is a Canadian comedy show set in rural Ontario, Canada that follows the lives of a small group of townspeople as they negotiate the inter-connected subcultures of a small community. Across its eight-season run, the show has offered an examination of how identity, especially as it is manifested in language, shapes the communities in which we live. This idea might seem counterintuitive considering the nature of the show – it’s a half-hour collection of bits and plot arcs that include many, many fart jokes, numerous euphemisms for sexual intercourse, and ruminations on the logistics of masturbation in zero gravity. It is not the environment one would expect to find thoughtful discourse on the nature of identity and group dynamics, yet that is precisely what it does.

The first episode of the series establishes factions in the town of Letterkenny, and the principal characters in the show all fall within four groups: the hicks, agricultural laborers; the skids, aimless young men who sell drugs and consume methamphetamine; the hockey players, the athletic “jocks” of the community; and the Christians, a group distinction that largely falls away after the first few episodes. What makes these groups unique is how they are identified; namely, through their differing behaviors and lifestyles.  However, language is the primary factor that establishes group membership. In particular, idioms and wordplay are used to reinforce in/outgroups. Each group has its own preferred slang; from phrases such as “pitter patter, let’s get at ‘er” (meaning "let’s get going") to “wheel, snipe, celly, boys!” (akin to "skate, score, and celebrate"). In Letterkenny, language is practically a proxy for identity and affiliation.

Group membership is critical to the various storylines of the show. Many of the conflicts from episode to episode involve the interactions and subsequent friction between groups, with each looking to one-up the others. Their conflicts are often highlighted by verbal battles and exchanges of wit (with the hicks generally prevailing). Although these inter-community squabbles produce much of the drama in Letterkenny, the in-group/out-group dynamic largely dissolves in the face of threats to the community from beyond. The first instance of this bonding takes place when the hockey players are threatened by members of a nearby native community (“the Rez” in the show). At a hockey match against a native team, the hicks come to the aid of the hockey players to defend the conceptual community of Letterkenny.

Interestingly, as the series progresses the concept of community is gradually expanded. In one storyline, the native community joins forces with the Letterkenny cliques to defend against the menace of “degens from upcountry” – a reference to those who live farther north in even more rural environs and who are inferred to be uncivilized. Later still, the outside menace becomes the Quebecois, and the battle lines are pitched as Anglophile versus Francophile; language, dress, and customs are used to highlight their differences. In the most recent season, the threat comes in the form of an American who has broken the heart of Wayne’s sister, Katie. As this plot arc plays out, all of the principal characters in the community of Letterkenny rush to Katie’s aid as a unified group and descend upon a single house somewhere in Michigan. The scene powerfully demonstrates how people who otherwise bicker and fight band together in a sense of community to defend against an outside threat.

Despite initial appearances, Letterkenny offers astute insights into the nature of identity, community, and belonging. The show cleverly demonstrates that group identity - and the way identity is established - is malleable, especially in the face of extraordinary circumstances. It is an interesting point to make, especially at a time when identity and community are seemingly existential issues.