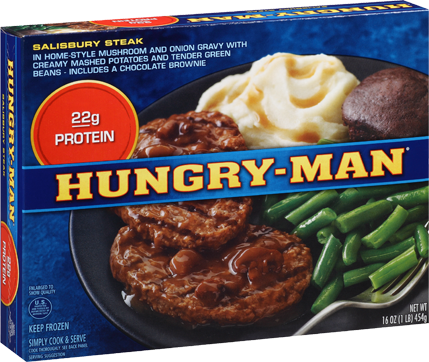 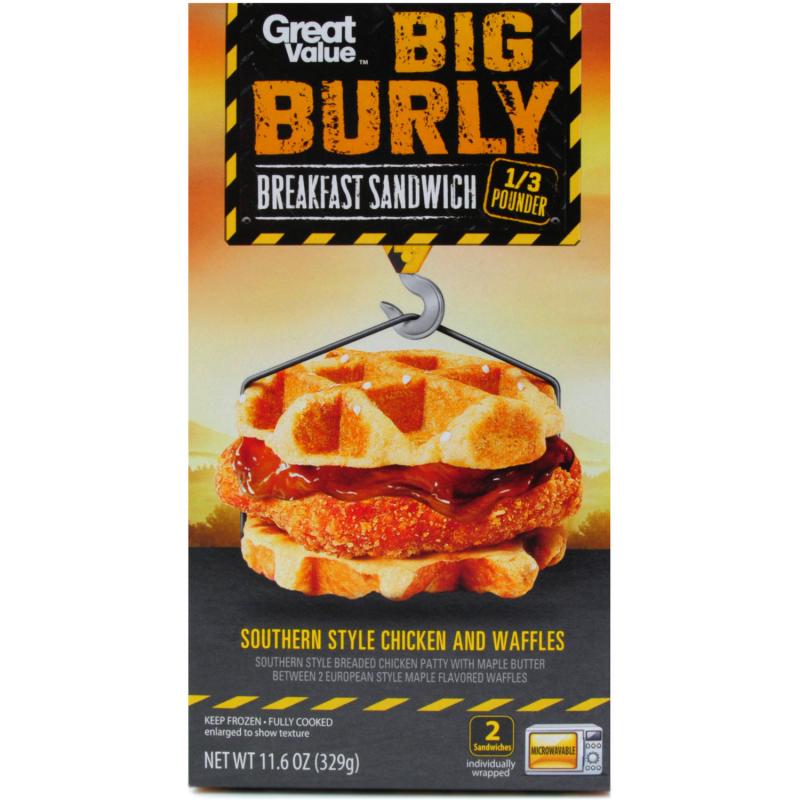 For example, these “manly” appliances were designed in the yellow and black color palette of power tools to ensure the prowess of domestic masculinity within the context of shifting breadwinner status. Similarly indexing masculine signs and spaces, the Big Burly line of breakfast sandwiches from Walmart’s Great Value brand employs yellow and black as well, but to invoke hazard tape, as the sandwich itself hangs from an industrial hook, wrapped in a metal cable; a sandwich so “big and burly” one needs a crane to lift it.

The SNL commercial makes us laugh as it emphasizes the appliances’ heft in quantifiable terms: a dishwasher with a 70-pound steel door, a six-foot-tall washing machine, a ride-on vacuum boasting 240 horsepower. And yet for years, Hungry-Man has promoted its value and its assurance to satisfy appetites by highlighting the weight of the meal, "over 1 lb. of food." Big Burly packaging also bears stamps declaring weight, like “half pounder.”

Conventions of masculinity also eschew health as derisively feminine. While freezer aisle man food often embraces high-fat, high-calorie fare, this SNL commercial engages the health of our entire ecological system. The ad proudly proclaims the appliances’ F- energy star rating, earned because they run on gasoline. And while this joke seems ridiculous, it repeats actual research findings that men link sustainability and femininity and resist “green” behaviors in efforts to adhere to social strictures of masculinity.

Two corresponding binaries—masculine:feminine::professional:domestic—are at work in the background of both “man food” marketing and SNL’s parody of it. It appears the central issue at hand is how to successfully invert these binaries, not only by mapping masculinity onto domesticity but also by allowing the feminine to enter professional spheres. “Man food” marketing strategies accomplish this but by preserving some of the worst aspects of masculinity. SNL lets the binaries clash to generate its humor, which results in laughing at masculine domestic work. I’m concerned SNL could have produced an equally funny skit where feminine aesthetic preferences are projected onto professional work, deploying props like pink, feathery construction gear or a bedazzled judge’s gabble. Strongmen folding napkins and feminine women mobilizing legal decisions shouldn’t be ridiculous ideas, and in order to mobilize progressive change to the sexual division of labor, it will be necessary to find strategies for deconstructing rigid binaries.