My husband and I were at a dinner party recently. It was an early dinner since all of the participants were parents. So while all of the adults stood around the granite-covered island, the children were all outside with whatever water gun was released this year, and their screams of delight provided the constant backdrop of our safe, suburban conversations—safe, that is, until one mother decided to decry the fact that a couple that she knew let their kids play computer games. This started a chorus of agreements and disparagements: “Can you believe…?!”; “My kids always want to play, but I try to limit….”; “I just don’t believe that this can be good.” 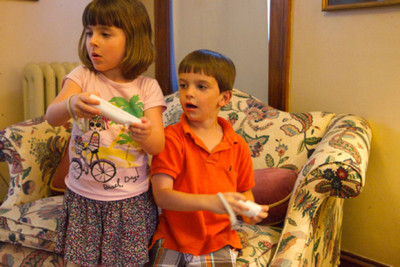 Okay, I may have been overstating this a little, but speak to your audience, I always say. My kids are five. They love playing the Wii and iPad games. When we let them. They also love swings and chasing butterflies, but I ignored these other interests because this conversation tapped into a topic that I am passionate about, and that is the politicizing of play and games as conscientious players or active agents.

The challenge in any of these conversations is the fact that play is liminoid (to use Turner’s terminology[1]): Play, like other liminoid behaviors, is taken up because it is purely elective and “fun.” In many ways, Turner is echoing Huizinga and is directly building from Sutton-Smith’s work, but to these theories, he adds that liminoid behaviors such as play invoke communitas, or a strong feeling of communal connection, as a result of spontaneous, ideological, or normative communion. To paraphrase Huizinga, play is non-productive.[2] However, a prevalent tendency in US culture is to police play, bind it up and analyze it through its potential to teach (for the forces of good) or to do great harm by teaching violence (for the forces of evil). This tendency moves play and games from Turner’s concept of liminoid to liminal. Liminal play is work, the transitional space from one place to another. It is goal oriented. Play, in an educational game, is work; players reach the goal of learning content by the end and the liminality enables a suspension of the world to learn the material.

Computer games, in particular, are the subject of policing. They are targeted in such a way that any choices concerning the play of computer games necessarily engage on some level with its surrounding politics. And I mean politics, from personal choices people make as active citizens to Supreme Court cases and Vice Presidential commissions. Therefore, to be critically engaged with computer game discourse requires a political statement, a defensible statement, within the developed polemics.

This political activity becomes even more fraught when parents make decisions to allow (or not) their children to play games. And here’s the thing: Any choice that parents make is automatically a political statement, whether that parent knows it or not. For example, a much-publicized 2012 study from www.Playr2.com reported that of the 1221 parents who had children seventeen years old and younger, 64% did not check age restrictions on games bought for their kids. And in those 64%, “55% simply explained that they did not think that age restrictions ‘mattered' on video games” (qtd. in Cox).[3] It is easy to read these statistics as questionable evidence concerning the efficacy of the ESRB ratings. However, what is more interesting is that these numbers hold the weight that they do in the political sphere. Parental choice (and the statistics generated by those choices) becomes part of the civic debate, part of the political machine.

Let me complicate this with one more level: Within computer game debates, certain subject positions allow for certain types of powerful statements. For example, my husband avoids telling people that he lets our children play computer games. Further, the only games that he allows children to play in the public eye are necessarily educational ones. And this is because he has been chastised for poor parenting decisions. As a mother, on the other hand, I have the ability to talk about children and games more freely. I’m not completely sure what has given me this authority in our cultural landscape. However, I join the rhetorical ethos of many mothers talking about computer games. Consider the website Mothers Against Violent Video Games,

which defines its mission thusly: “Mother’s [sic] against violent video games is an organization put together by concerned mothers who want to spread the word about the increasingly violent games being sold to our children. Our goal is to get these types of games out of the hands of the impressionable youth. These games are corrupting our youth and making them increasingly violent and disobedient.”[4] Again, working within the conflation of violence with computer game, this group writes activist letters to game industry people and political representatives to protest the sale of all violent games. They run into a number of slippery slopes, however, which demand further academic attention, including the absence of ESRB ratings and a lack of a working definition of violence in their conversations. Nevertheless, their mother-based subjectivity provides them the rhetorical foundation from which they can speak. So too, as it happens, does my new subjectivity.

Thus, the choice to allow my children to play computer games is a political statement. My choice to let them play entertaining games (rather than educational games) is a radical statement. I couple this with the fact that I research video games, teach about video games, and play video games, and I have memorized a slew of relevant statistics that I whip out at the least provocation. The fact that I am aggressively forthcoming with these choices ensures that my parenting choices enter a civic debate at the level of anecdotal evidence. I become a conscientious objector through the very act of play, and I bring my children with me as another data point in the mundane rhetorics of everyday life.

So returning to that kitchen island: my friends stood around and stutteringly started a more nuanced conversation. Sure, they played computer games when they were young. Mrs. Second-Grade-Teacher uses games to teach math, and the kids love it. Someone heard that games teach coordination. And so the conversation went until topics switched, and during that time, I was happy to join in with my experiences and knowledges. But I should clarify here in a way that I didn’t at this pleasant social function: For me, play is not distraction; it is not the promise of (probably unfulfilled) desire; it is not educational. Or at the very least, it is not just these things. My choice to play the types of games that I choose, my choice to let my children play games at all, is a purposeful interpolation into the discourses of play, the computer game complex, and the body politic.