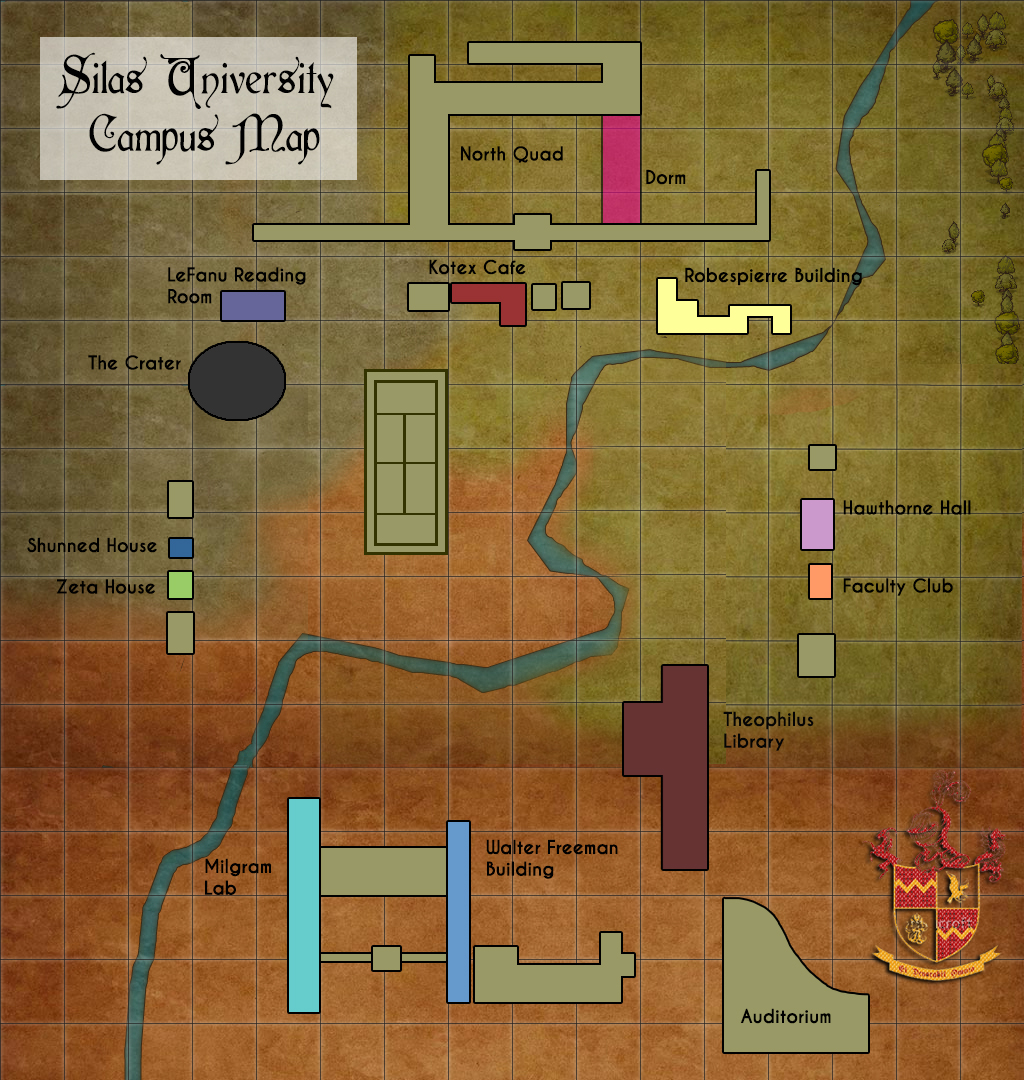 I created the Fantasy Sound Maps site as a creative project to play with the theoretical concept of collaborative authorship of imaginary worlds. I wanted to explore how canon, headcanon, and fanon relate to each other when audiences contribute towards a shared understanding, and expression of imaginary space.

Historically, sound maps layer ambient recorded sounds of physical space on top of a graphical representation of that place (i.e., a map). These maps are crowdsourced and rely on participants to record audio on their phones or other devices (using GPS data) to link the sound, the physical location, and the map together. Soundmaps can create extraordinary archives that allow listeners to experience locations out of time and space.

Though I've put together two fantasy sound maps, the brevity of this space allows me to focus only on the one of Silas University. This is a map created by fans using production notes found on Twitter and stills from various episodes of the series, Carmilla. It is entirely fanon. Mapped onto it are soundscapes created in ambient-mixer of multiple locations. Interestingly, ledameron created a soundscape for not only a particular site, but also event within the series (one that happens off camera). They developed a detailed headcanon of the event in soundscape and posted it. Following this post, other creators use their own original headcanon to add on to the world's soundscape, while maintaining features of the original poster, a clock tower chiming. As locations are farther removed in the imagined physical space, the chimes volume and impact are also reduced in the soundscape. Without a visual cue, fans accommodate each other's headcanons to create a (relatively) cohesive fanon of Silas University.

However, as we can see with the map of Hogwarts this cohesive fanon is only possible due to the relatively few contributors to the Silas Univeristy soundscape. When there are a plethora of contributors, the cohesive fanon becomes a heteroglossia of headcanon that the map attempts at ordering.

Thanks for this thought provoking post. I...looked at the projects before I read your note and was also struck by the fact that the Hogwarts space has no sense of time because of the the approach to sound. Video games and films are obviously able to give cues to the individual as to changes in time, but maps have always had more of a challenge in showing event-ness because they have a lot of control over where and when the audience is in those spaces. One way around that would be to create several Hogwarts maps for different events. One for the Battle of Hogwarts, one for the events at the end of book/movie 3. I'm now thinking through how those maps might both limit and expand potential for fan-narratives within these spaces. Good sound has been a challenge to media (moving from silent film to talkies, dialogue in video games, just all radio and podcasting) in a way that images have not. Thanks so much for making me think on this topic.

Making headcanon explicit is always intriguing, as it brings attention to the differences in interpretation present across fandom. Harry Potter is a particularly compelling example, as the franchise has already weathered much debate concerning how visual and aural elements were presented across the feature films (as compared to the books). It would be an interesting exercise to see how an audio map would look and sound if it was derived from literary content that has not received a movie, television, or radio adaptation. With no audio-visual baseline, would we see a greater variation in headcanon between participants?