Indigenous Polaris Music Prize awardee Jeremy Dutcher utilizes his classical and Opera training to create hybrid forms inspired by centuries-old songs from the Tobique First Nation. He rearticulates an archival method, collecting old music from museums and his community, to “reimagine new worlds around them” and to practice his peoples’ endangered language Wolastoq (Dutcher in Global National, n.d.).

The album cover art of Dutcher’s acclaimed work, Wolastoqiyik Lintuwakonawa, criticizes colonial ideas of Indigenous authenticity. Specifically, the criticism is rooted in the romanticized ideas of Indigenous peoples as vanishing (Raibmon, 2005). The cover image is a culture jam that subverts an iconic 20th century image. The iconic image that Dutcher speaks back to is a black and white photo that depicts an anthropological phonographic recording held by the Library of Congress captioned, “Piegan Indian, Mountain Chief, listening to recording with ethnologist Frances Densmore, 2/9/1916.” 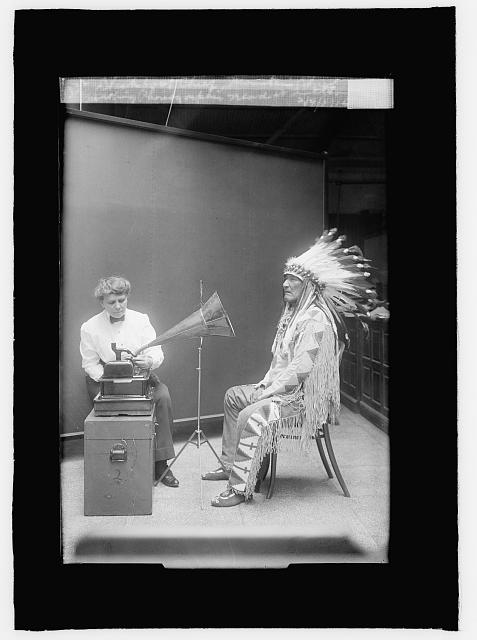 The photograph is framed by Densmore’s practices of “preserving” and archiving what anthropologists deemed as authentic Indigenous sounds. This salvage ethnographic practice was funded by the Smithsonian Institution's Bureau of American Ethnology and involved white researchers entering Indigenous communities and taking what they deemed “authentic” cultural and intellectual property such as linguistic records, Indigenous belongings, and traditional knowledge.

The cover art of Dutcher’s album shows him recording his own music, sitting as the Chief, and the back of the album depicts him in the role previously held by the white ethnologist. The image also includes a new background containing Indigenous art and noticeable additions of color. It beckons the viewer to consider the ethics of the observer versus the observed (in this case the recorder versus the recorded), the frames of the past which define colonial expectations, and the agency of Indigenous musicians making choices to resist and keep their languages in practice.

While the Internet has afforded opportunities for Indigenous peoples to find and connect with audio recordings of their ancestors, as was the case with Dutcher’s music, it also is an ethically questionable environment saturated with free or easy access to Indigenous intellectual, traditional, and cultural property. An Indigenous person recorded by anthropologists using a phonograph and wax cylinders in the late 18th and early 19th centuries very simply could not consent to have those semi-private recordings being digitized and widely disseminated in the Information Age. By foregrounding these questions of consent for the circulation of the recordings that inspired him, Dutcher negotiates the tensions around evolving conceptions of authenticity, tradition, ethics, and Indigenous resurgence while reclaiming and redefining what anthropologists deemed as authentic sounds.

Ashley Cordes (Coquille) is an assistant professor of communication at the University of Utah. Her research lies at the intersection of Indigenous studies, digital media, and critical/cultural studies. Her recent work in these areas has been published in journals such as Cultural Studies ↔ Critical Methodologies, Journal of International and Intercultural Communication, and Feminist Media Studies.