Andy Everson’s series of digital art reimagines George Lucas’ stormtroopers in Northwest Coast formline style, evoking historical and ongoing colonialism, and calling for intercultural understanding in an era of Truth and Reconciliation. Through narrative and visuality, these pieces mediate cultural connections and exist in the commonality of storytelling.

Born in 1972, and named after his grandfather, the late Chief Andy Frank, Everson resides in the Comox area of Vancouver Island. His artistic style represents a merging of his two ancestral First Nations, the K’omoks and the Kwakwaka’wakw. 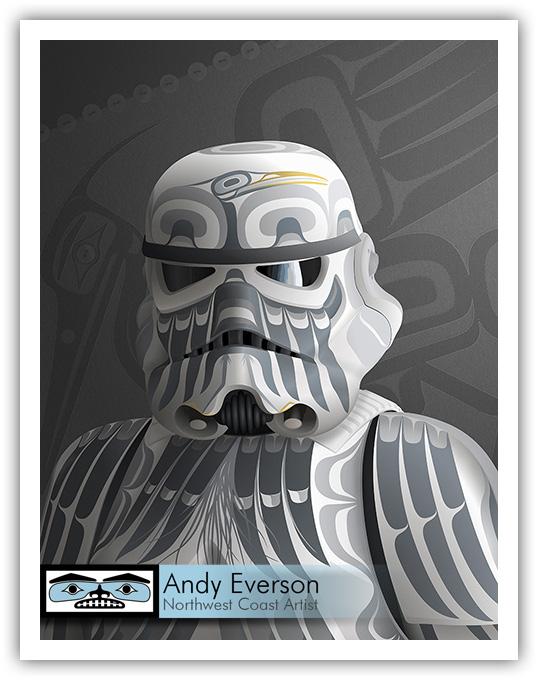 While they are only two pieces in a larger series of Star Wars character remixes, the stormtroopers – Resistance (2016) and Defiance (2014) – tell a story to both Indigenous and non-Indigenous peoples about the importance of a warrior spirit. In his artist statements for the pieces, Everson speaks of the history of resistance and defiance of Indigenous peoples in resisting the destruction of tradition through colonization, and the importance of remaining defiant in the adaptation of culture and ways of life to current realities.

The adaptation of traditional art to digital practices continues to stimulate dialogue around misperceptions about what traditional art entails. Traditional art may be based in traditional practices, but it is not static, or “stuck in the past.” As a form of indigenization, Indigenous artists, Everson included, have worked towards decolonizing the digital in order to reach wider audiences, and to utilize new tools for historical cultural practices. This is observable, for example, in the 1997 - 2004 piece, CyberPowWow, by  early digital artists, including Ahasiw Maskegon-Iskwew (Cree/French Métis), Archer Pechawis (Cree/European), and Skawennati Tricia Fragnito (Mohawk).  Pechawis noted that they “adopted digital technologies as culturally relevant medium,” using the internet “not just as a new technology, but a new territory, one that we could shape from its inception.”

Today, the digital technology is merely a backdrop to the importance of the story. Maskegon-Iskwew spoke about the noosphere, or the sphere or human thought, as a way to begin to comprehend both the collectivity of spirit in digitality, and the interconnectivity of spirit that defines animism. Everson’s stormtroopers continue this knowledge translation through the universality of the Star Wars story. The image of the familiar stormtrooper figure draws one in, while the unfamiliar (to many) artform invites curiousity, mediating the initial moments of a new cultural exchange.