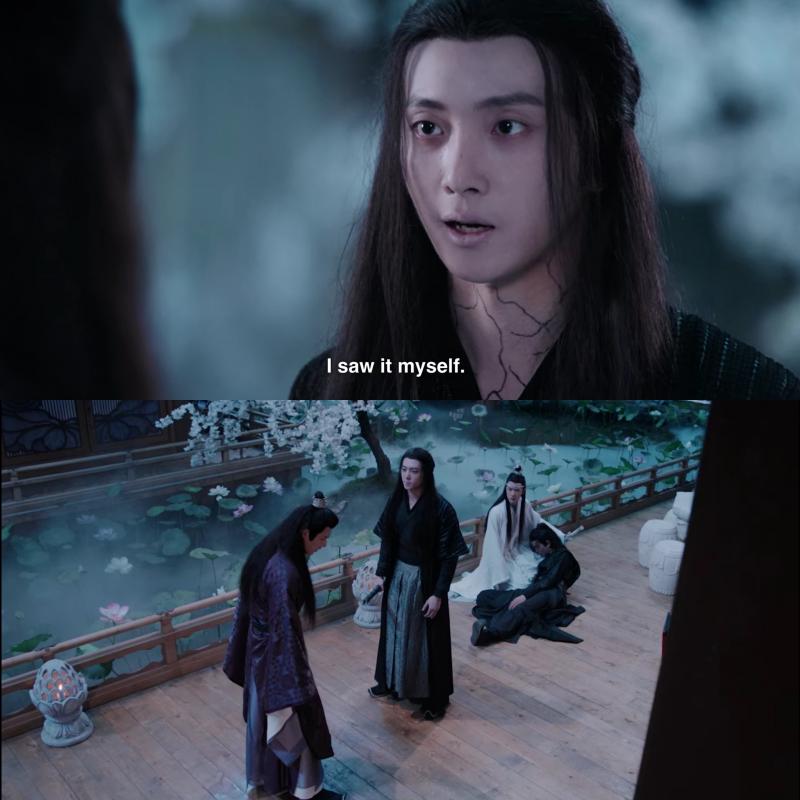 Chen Qing, the name of Wei Wuxian’s dizi, means “to tell a full account.” It is the tool with which he summons the Ghost General, Wen Ning. Wen Ning is the sole surviving character who knows the secret of Wei Wuxian’s sacrifice of his golden core—the very reason why Wei Wuxian turned to the demonic path in the first place. Wen Ning—a war refugee, a liminal figure hovering between living and dead—is the one who provides the full account, the key to the narrative, the bridge between two timelines.

This scene is key to the story's ethos. Modao Zushi refuses didactic storytelling, dodging moralistic explanations and refusing clear answers to questions of, for example, whether Nie Huaisang is behind the resurrection of Wei Wuxian. But here we see Wei Wuxian—the protagonist—unconscious, and a seemingly minor character central to the frame and to the full account. This subverts the hierarchy of many narrative forms, especially conventional novel form, wherein a minor character would simply serve as a foil to the protagonist or as a function within the plot.[1] Here, Wen Ning reveals a secret that Wei Wuxian himself hides from the audience, a secret that the novelistic narrator does not narrate.

Wen Ning, a war refugee, a survivor, a kind and gentle man who rejects toxic masculinity, is what allows Chen Qing (“to tell a full account”) to happen. It is fitting that Chen Qing also means “past feelings.” This moment is central to the story as a whole, weaves past and present together, propels several of the characters into a deeper understanding of one another, and furthers readerly understanding. Chen Qing Ling, translated roughly to “to command the telling of a full account,” on the one hand signifies Wei Wuxian, the wielder of Chen Qing, but perhaps more interestingly, may refer just as much to Wen Ning. In this way, the show troubles the hierarchy between major and minor characters and challenges normative narrative form.

Notes: Special thanks to Andrea Acosta, with whom I’ve had many transformative discussions about Modao Zushi and queer storytelling.