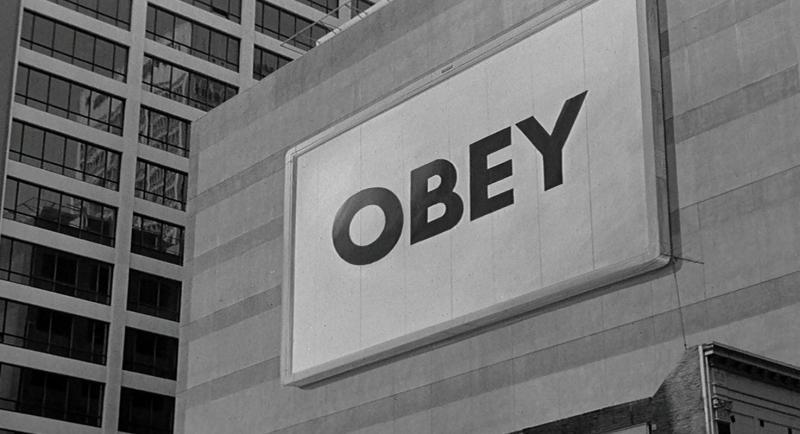 A huge factor of John Carpenter's cinematic legend is his keen sense of historicity.

I had the pleasure of interviewing him during my stint at Fangoria, and we conversed in depth about his capturing the 1980s zeitgeist through his work during that decade. He said in 2005:

"They Live was a reaction to the 80s and ‘Reaganism’ and that's never gone away.  It's still with us today...THEY are still out there today…"fooling us."  However, in our cultural lexicon, reality has been tampered with, it is no longer an objective concept.  Fake news, alternative facts, 'false flags' are now endangering logic and the fabric of cultural mores.

By comparing the Reagan era commentary seen in this work and extrapolating its significance in today's political climate, is it even more significant now?

The true sense of the definition of apocalypse would be revelation of things hidden.  I would argue since Nada put on the sunglasses back in 1987, thirty one years later, all of the subliminal manipulations of those in power are now out in the open...blatant. Some questions for this forum's discussion are: In an age of alternative facts and fake news...it seems one does not need the sunglasses any longer to "see" the corruption...what was hiding in They Live is now in broad daylight.  Therefore, has the apocalypse already happened? Is it a process rather than a one-time event?

The included image is the iconic initial moment when Nada "sees" capitalistic propaganda for what it really is.  "Obey" has been the predominant logic behind capitalism serving authoritarianism (yet ironically has since become a clothing brand).  Carpenter also revealed to me that Western culture will be more like Brave New World rather than 1984 because we will welcome our slavery happily. We "Obey" willingly, not from a place of oppression.  Is the assault on reality an obfuscation to keep the masses in line?  Is it orchestrated?  Is it as Carpenter postulates: that we are still being fooled? Or do we obey to maintain consumer culture all in the name of 'national security'? How did we get to this point?