For many decades now, the Vikings have been a standard source of lyrical and aesthetic inspiration for heavy metal music and its many sub-genres, particularly in Northern Europe and the US. The Northern metal fandom's fondness for anything Viking, stemming from a sense of shared heritage, often manifests in controversial ways, as Viking Age and medieval Scandinavian symbols, figures, and stories are appropriated by far-right movements.[i]

But what happens with metal communities lacking this sense of cultural connection? This question has been explored in an anonymous survey conducted by the author between July 8 and August 7 2021 on the metal community of the Mediterranean Republic of Cyprus, an overwhelmingly Greek Cypriot, liberal/apolitical, non-religious demographic with no inherent cultural links to the Vikings (Fig. 1). 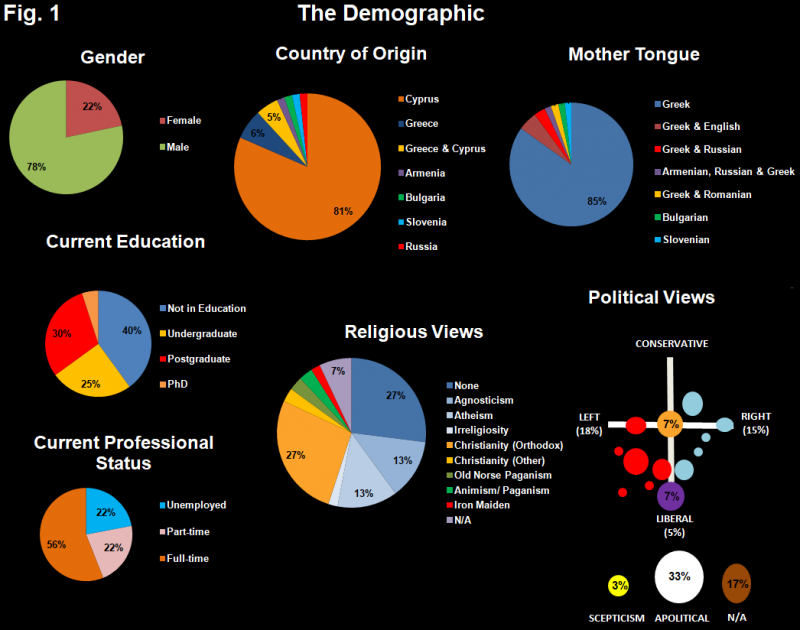 The vast majority of the community consumes Viking-related media, including metal music, films, television series, books, graphic novels, computer/video games, and even traditional Nordic music (Fig. 2). Although the participants' preferences in Viking-related media mirror universal trends in the entertainment industry, their interest in the Vikings is not necessarily superficial. 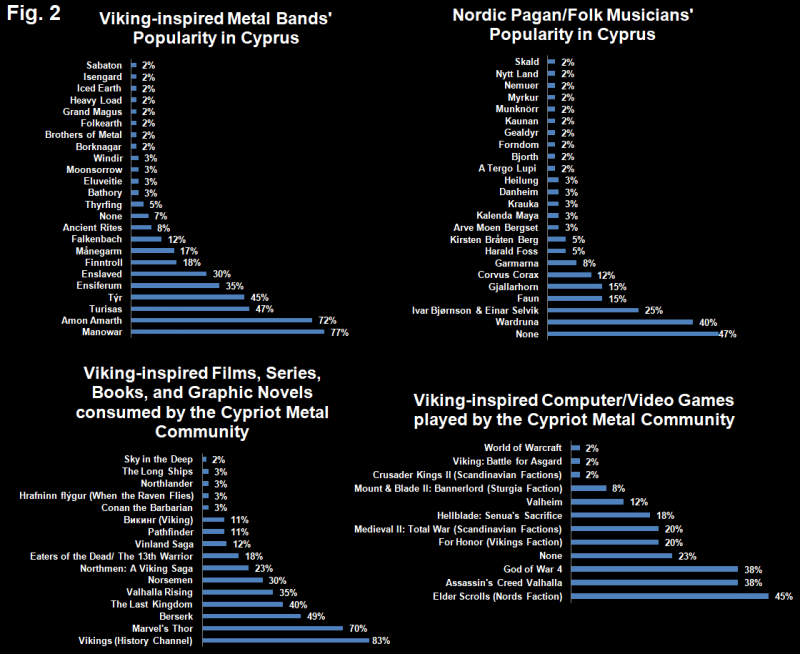 Stylized Viking material culture has found its way in the everyday lives of over 40% of the participants, who own relevant fashion or decorative items (Fig. 3). 50% of all participants commit to online reading on Viking history, and 57% are interested in reading original works of Old Norse literature (Fig. 4). Strikingly, 81% of the participants are open to professionally engaging with the Vikings, particularly in media production, as well as in academic research (Fig. 5). 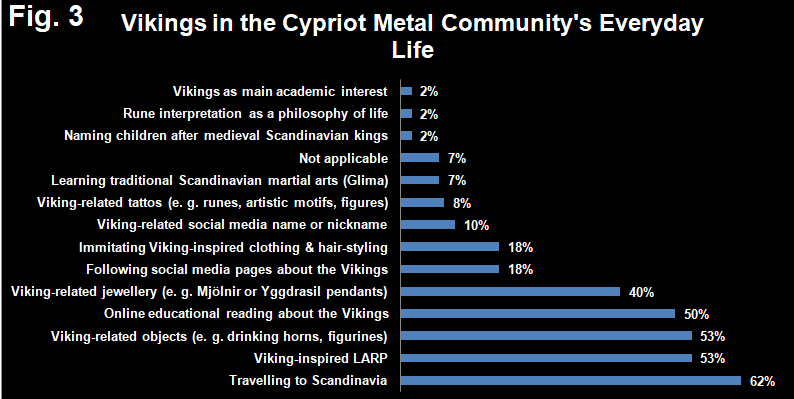 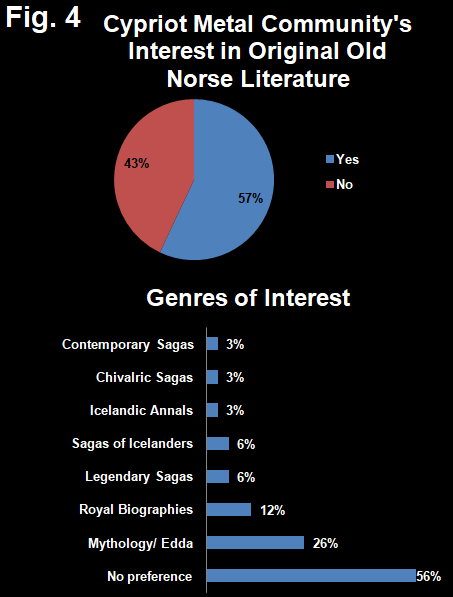 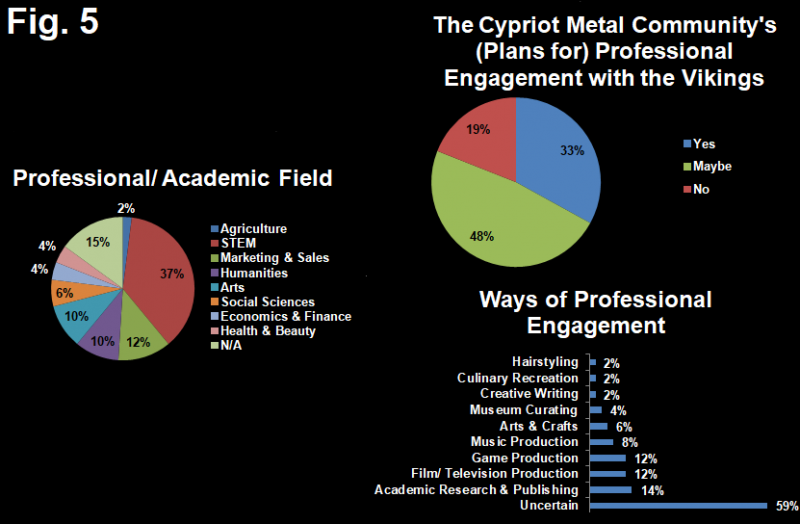 This illustrates that casual interest in a subject may lead to more serious professional and academic initiatives. Academics could assist in their materialization by familiarizing with the public's perspective on their field (Fig. 6). Through widely accessible online publications, translations of original Old Norse texts, and discussions in social media platforms, academics can combat dangerous misconceptions regarding the Vikings, and open up the field of Old Norse Studies to a more diverse audience. At the same time, with the help of readily available scholarly knowledge, artists could create more sophisticated, culturally respectful, and even educational content. 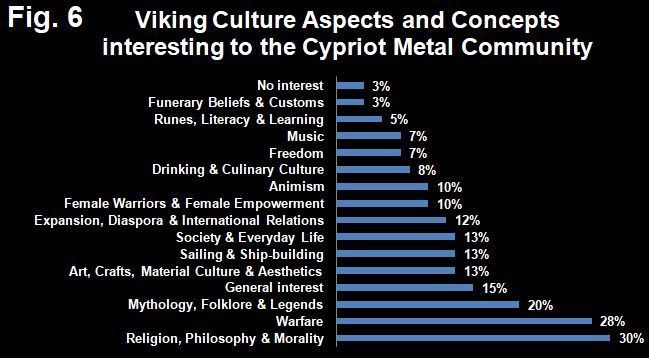 The Vikings' reception in the Cypriot metal community is just another example of how media can transcend geographical and cultural borders. Becoming aware of pop- and under-culture tendencies can ease academics into this dialogue between media creators and consumers, making it more fruitful and inclusive. 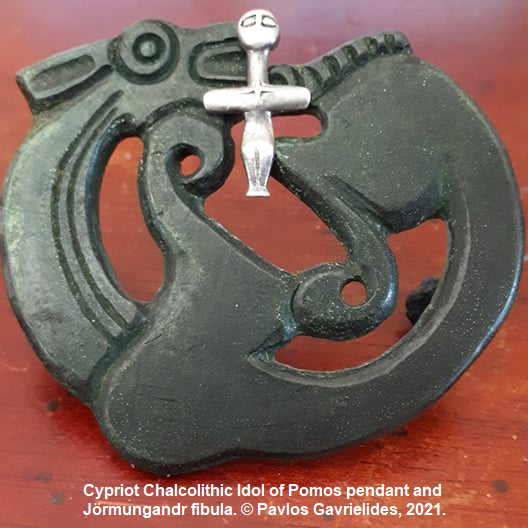