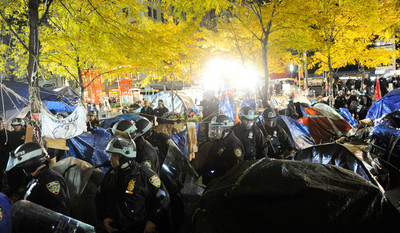 [cross-posted at "The Right to Look']

For the past few days, Occupy locations have reverberated to the sound of the force of law. I mean this literally. I was awakened at 3.30am on November 15 by the sound of what I think were helicopters above lower Manhattan. The combination of police barricades and the closure of the subways meant that no one could get closer to the eviction of Zuccotti Park.

Even the airspace was closed, not to prevent the Occupy air force from deploying but to keep out the news channel helicopters. Once again, we are reminded to "move on, there's nothing to see here."

The evictions of Occupy sites nationwide, especially at Zuccotti Park, have created a new hybrid by categorizing political protest as a health and safety issue, but then responding to it with the weapons of counterinsurgency.

The park itself was suddenly flooded with klieg lighting, blinding those trying to sleep. From the Twitter feed, email and later news accounts, it's also emerged that Long Range Acoustic Devices (LRAD) were used to disperse the crowd with painful sound blasts. The LRAD was developed as a weapon of counterinsurgency after the attack on the USS Cole in 2000 by al-Qai'da and is now mounted on certain NYPD vehicles.

After a set of legal maneuvers, the park was opened to the public, with the stipulation that no one can sleep there. The result was that "anyone found lying down and even a few of those who tried to sleep sitting up were woken by security guards for Brookfield Properties." The private corporation now has its own security force on the streets of New York, rendering Zuccotti into the latest outpost of Baghdad-Kabul Inc., the 60 billion-a-year cash-fest for private security firms. Brookfield made $377 million yesterday on the sale of a single building in New Jersey. Just saying.

In short, we have a full range of counterinsurgency tactics being deployed from noise and light violence to sleep deprivation and the now infamous destruction of books.

Reverting to its standard deference to counterinsurgency, the New York Times described how:

The mayor and his advisers had grown fed up with their inability to police the park, with complaints about noise, disruptions to businesses and odors, and with a leaderless movement that they just could not figure out how to deal with.

Never mind that recent articles had shown there were more complaints about the noise from Ground Zero building work than from Zuccotti. Or that most of the failings here are on the city side: an inability to police must not be tolerated. A few miles northwest of Zuccotti is the Cardozo Law School where Jacques Derrida delivered his epic essay "The Force of Law" in 1989. Reading an early essay by Walter Benjamin Critique of Violence (1921), Derrida pointed out that it is only in English that one can speak of "enforcing" the law. Both writers showed that law is, in the last analysis, only force but that it does everything it can to sustain what Montaigne long ago called "the mystical foundation of authority." It is that claim to authority, the ability to determine the relation between the sayable and the visible, which I have called visuality.

If this deconstruction is what one might expect from Derrida, his conclusion pushed beyond the scholastic definitions of "politics" and "theory" to show why Occupy is perceived as a threat to the state that requires counterinsurgency tactics. Developing Benjamin's assertion that a general strike is "the right to use force"--which is not at all the same as violence--on the part of labor in the same way that the state claims the right to enforce law, Derrida asserted:

There is something of the general strike, and thus of the revolutionary situation in every reading that founds something new and that remains unreadable in regard to established canons and norms of reading that is to say the present state of reading of what figures the State, with a capital S, in the state of possible reading.

For Bloomberg, the New York Times and the other mediatic apparatus of the one percent, Occupy is and remains unreadable so it must be eliminated as pollution. Asserting at his press conference that the decision to evict was "mine alone," Bloomberg sought to restore the authority of the State for his one percent class. His comment made it clear first that he wished to be regarded as the heroic leader, justifying his claim to authority; and that he had simply decided in the manner of King George and consulted no lawyers or other functionaries, let alone the lonely occupant of the White House, who once again missed his opportunity.

Bloomberg's action was, then, a classic admission of failure, the failure to understand and communicate. In an indication of the absurdity of it all, the simple tent has now become the latest purported weapon of insurgency, banned from Zuccotti--but not Union Square, where a large tented holiday market is up until December 25. Tents were even banned from sale anywhere near the Occupy London site at St Paul's Cathedral. Today the City of London Corporation filed an eviction notice to Occupy London, specifically indicating that

the Orders sought will not prevent lawful and peaceful protest in this general area and is directed at the tents and other structures.

Serious legal debate is now being pursued relating to the right to bear sleeping-bags. When the veil was banned in France, the performance duo Niqabitch parodied the ban by wearing a niqa with miniskirts.

On the N17 demonstrations, and thereafter, let's wear tents in whatever way we can.

in the determination to resume only a wholly transformed work, no longer enforced by the state, an upheaval that the strike not so much causes as consummates.

In this way, most of the strikes cited by Rosa Luxemburg in her 1906 pamphlet on the general strike were local, spontaneous actions. These strikes were “general” not because everyone took part but because their aim was a general transformation and renunciation of domination. Benjamin saw this vision of revolt as not being violent but rather as “deep, moral, and genuinely revolutionary.” The right to look. The invention of the other. Or even, as Arundhati Roy put it today to OWS, "the right to dream."