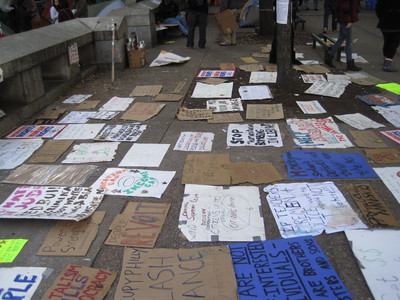 Walking down Market Street my partner and I turned towards City Hall—I wanted to go through the walkway inside the building plaza to see if a mural project I had visited some months ago was still there, since it was covering construction.  We found all four entrances obstructed, curious for a major pedestrian thoroughfare, and went around the building, finding a large encampment spread across the north side of the edifice.

“Occupy” many signs said, some handmade, some typed, some laminated while others on raw cardboard.  Wandering around the camp, which had at one pm on a Sunday during the feel of a music festival, with campers having food, hanging out in the sunlight, and playing with dogs during a lull between events.  An assortment of different kinds of tents could be seen, with varying signs: a Quaker prayer tent, a Ron Paul campaign poster, a Sukkah, “Eat more Food,” among many others, creating a bricolage of political, religious and aesthetic affiliations.   Although the Occupy is accused of being without demand, and largely coordinates actions through social media, a walk through an encampment reveals that first that “demands” are both explicit and in the process of constantly being framed and reframed, and second that social media is not used at the exclusion of the material—public spaces are actively shaped to re-imagine political potential through the reclamation of public space.  The cardboard sign provides a crucial fulcrum for generating a sense of publicity and message.

Part of the reason for violent reactions against Occupy participants is an underlying fear of genuinely public space on the part of city managers, elites, and police.  For space to be truly public it needs to be up for grabs, open to many different forms of life, of communication, and can get messy.  A characteristic element of urban space in major U.S. cities is that “developed” urban centers are glossy and smooth: they invite flows of commerce, of people, of transportation, but not accumulation, a sense of safety and attraction without intimacy-- space that contours but does not hold.  This is one reason why there have been so many wars against homelessness, since they are a population that pushes space to its seams, using it more than a conduit, the products of the privatization of public resources in the hollowing out of the welfare state.  In Right to the City Don Mitchell charts the relationship between the eradication of public space and the war against the homeless, and in “Aesthetics of Superfluity” Achille Mbembe articulates the ways in which colonial cities require architectural environments that promote flow rather than dwelling in order to prevent confrontation with some of the uglier elements of colonial legacies.  Both of these arguments illuminate my surface reading of one of the aesthetic strategies at work in the Occupy Philadelphia campsite.

Across from the information tent, and the information bulletin board, a palimpsest of different notices, and signs a combination of printouts and handwritten papers, is a horizontal wall of signs on the sidewalk, on the western periphery of the camp.  “Shut it down,” “We are the People…Really,” “Jah Bless the Jobless,” “Subprime Lenders Targeted Black and Brown People,” “Racism in the Movement Divides Our Power,” “Hey pampered CEOs, Shine Your Own Shoes!” “Education Gap < -- > Income Gap,” “Stop the Humanitarian Bombing in Libya!” “I won’t believe that corporations are people until Texas executes one,” “End corporate influence this is not true democracy,” “Respect the ground, don’t litter,” “Our kids futures are not for sale,” “People- Revolt,” “Fox News Lies,” and so forth

The signs, crumpled, sometimes laid one on top of the other, often ripped from pizza and banana boxes display an kind of vulnerability and making-do.  They are not typed out, they are not laminated and they are hand written suggesting imperfection but also unrepeatability.  The signs are not grandiose, they are humble, and form an ephemeral archive of previous demonstrations.  One could say that it is historical but the encampment  gestures to a model of politics which does not operate based on spectacular events but rather through rehabilitating the everyday: whatever demonstration, tent decoration, or pole marker that the signs had served as in their vertical life times is not separated from their horizontal present.  They mark a connection between politics as a form of life and shape for communal action.

However, the signs also form a point of entry for new publics.   David Henkin argued that signs are “captions” for dynamic urban landscapes that communicate with other signs even if they are working for different goals and “confirm and enhance” each other (52, 55).  The gathering of cardboard salutations mentioned above clearly do not offer a unified narrative that admits to a clear endpoint to Occupy’s action.   Instead they illuminate on the level of the visual the democratic potential that Occupy by trying to expand circuits of communication and the range actors who can participate in a city’s public life.  The signs, a form of address used by politics, education, and commerce as well cuts across different publics (Henkin 174) and allows people to cultivate orientations to public space.

If anything Occupy is an ongoing performance against the superfluity that has characterized a liquefied market economy and a general orientation to non-spectacular life in the United States.  Not immediately legible, not sleek, mistaken as debris, and trite unrest the signage placed on the edge of the encampment attests to an elongated form of politics, one based on using ordinary, even low-grade materials, in common space.

The City of Philadelphia is planning to evict occupiers at the time of writing this post, November 27th at 5pm.  Homes, people, and the fragile signs will be forcibly removed to return the City Hall plaza to a superfluous space of low, rather than place of dwelling.  Specifically, for a $50 million construction project to begin on Dilworth plaza, another privatization of public space. It is important to note that this movement has also created a space for Philadelphia's homeless to dwell with less molestation from authorities-- this displacement merely repeats, and is not too different from the series of displacements of homeless that occur in cities across the country on a normalized basis.  The archive of signs on the plaza are  not aesthetically different from the signs that homeless people use to gain visibility, handwriting being both of necessity and an important way to signal embodied vulnerability. Don Mitchell's suggestion: that that the right to the city is at its basis a right to exist, is sadly undesrcored by these events.   In the wake of this impending destruction, the Occupy facebook feed has showed messages urging supporters to document the displacement and potential confrontation, creating yet another archive of the ephemeral, demonstrating the importance of marking, bearing witness to, creating a set of signs to point to ongoing social dislocations in rapidly evaporating public space.

Mitchell, Don. Right to the City: Social Justice and the Fight for Public Space.  Guilford Press, 2003.