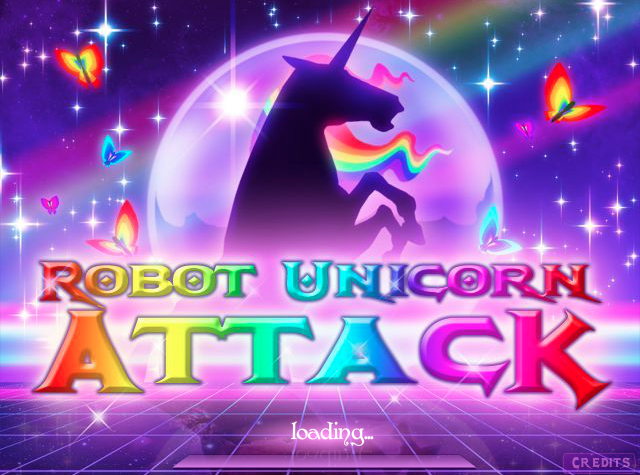 (Click this link to play Robot Unicorn Attack on an emulator site.)

One lucrative business pursuit for indie game developers has been the production of advergames – games designed to advertise a product, service, or brand. We’ve been observing a sliver of this activity in our research on the [adult swim] phenomenon, which began as a late night programming block for Cartoon Network but has since grown into a lifestyle brand that includes a record label, clothing and merchandise, and, of course, an ever-expanding library of games.

Several studios create games for [adult swim].  But in supplying close to a quarter of those 100-plus games, This Is Pop has designed some of the most played, including Hemp Tycoon, the game with the highest current user rating. As the name suggests, this game parodies the casual game phenomenon Farmville.  Hemp Tycoon is not the opposite of casual games; that is, it is not a hardcore title that demands time and skill from the player.  Rather, it is best understood as what we are calling a “contra-casual” advergame because it uses the accessible, casual game format to trouble prevailing definitions of games, advertising, and genre. (Though it bears noting that even these titles don't foreclose the possibility of gamers playing them as hardcore gamers might). These advergames operate by solidifying the forging of a niche taste culture of parodic transgression that begins with the nightly programming block but extends well beyond it.

Hemp Tycoon’s mode of address is in keeping with most of [adult swim]'s titles, including other games made by This Is Pop and other studios. However, what differentiates This Is Pop's games from stylistically similar fare (e.g., Mediatonic’s Robot Unicorn Attack, Spiritonin’s Amateur Surgeon, and Ham in the Fridge’s 5 Minutes to Kill (Yourself)) is the thoroughgoingness with which the studio aligns itself with the [adult swim] brand (including placing the network’s logo atop its own homepage).

We’re wondering if advergames present critics with a fresh avenue of media criticism?  Do these titles highlight considerations of niche audiences and gameplay commodification over questions of design? And are advergames more likely to function pleasurably for audiences (i.e., we know we're playing an ad, but it’s okay because we get the joke), and serve as a calling card for industry by showcaseing the studio’s ability to align content and gameplay design with a reflexive wit that both players and network execs enjoy?

Matt and David, thanks for a great post. This line of inquiry gets more and more intriguing.   I can see a number of avenues that would make interesting studies in and of themselves.

But at the moment I'm taken with the idea of cultural capital, and so, I think the role of the player becomes particularly interesting in advergames.  This particular iteration of an advergame, which seems worthy of distinction, seems to both require and call into question their familiarity with the tropes of a variety of cultural forms.  I think your question about advergames representing a new avenue of media criticism is particularly worth pursuing because the games themselves certainly represent a response even as they depend on buy-in on the part of the players for their relevance.  At the same time, as you point out, they do seem to represent an instance where we see producers showing particular savvy, as they've figured out a way to both critique culture and to profit from it.

This is a very, very fascinating aspect of contemporary games culture. I think you are both quite right (Matt and David) that this is, in part, a hack or critique of the tropes and expectations of the world's current gamification craze. But as Randy points out, player participation is necessary for these critique to work, and player participation oddly authenticates the critique as a legitimate, working ad.

It's a difficult duality.

It reminds me of the Guy Debord/Situationist "detournement." Which is to say, there's a belief here that the critique of game's should use the same form. And that using that same form actually unmasks its workings. I'm sure you all have already considered this angle, but it's really interesting to think of video games being situationist. Especially on Adult Swim. But maybe that's because Adult Swim is actually one of the rare places for trangressive, culture hacking we've got between C-Span and HGTV.

Thanks for your comments, Randy and Zachary!

I don't want to speak for Dave, but I can't recall Debord ever coming up in our conversations. That said, "détournement" could certainly be a generative idea for thinking through the kinds of critical or quasi-critical operations that [adult swim] games perform. On the other hand, I am also hesitant to celebrate these advergames as "countergames" (to borrow Alexander Galloway's terminology) because they are complicit (as Randy's invocation of "(sub)cultural capital" signals) with the broader goals of corporate gameplay commodification. Even if they aren't as ham-handed in their design as so many other corporate instances of gamification, it is precisely the brand's uncomfortable, itchy "duality" (as you say, Zachary) that makes these objects so perplexing and interesting.