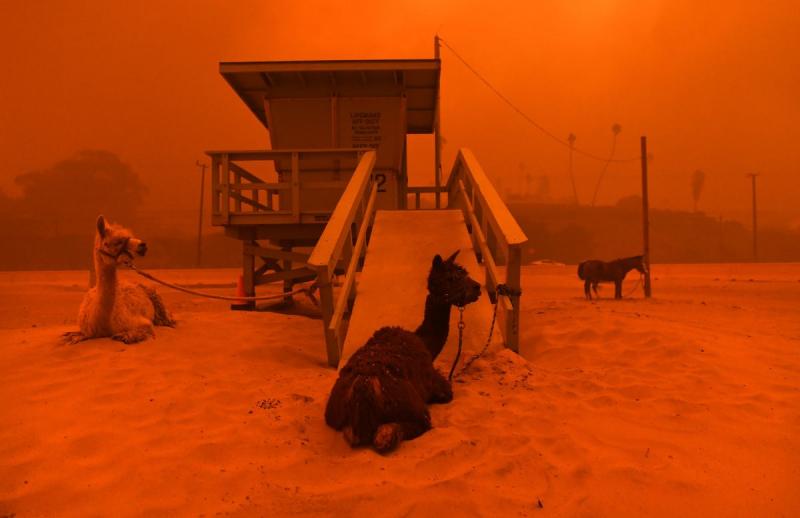 “Cinema’s Natural History” examines the Surrealist and Frankfurt articulation of “natural history” as a cinematic genre (understood as a form of historical interpretation and perception), for which Siegfried Kracauer stands as a key theorist. Kracauer’s 1928 theorization of photographic and cinematic media teaches us to perceive historiographically, with an eye toward an estranged vision of the “nature” of contemporary circumstances. This practice of looking came to mind as Wally Skalij’s surreal photographs of the Woolsey wildfires published in the November 9, 2018 edition of the Los Angeles Times began to circulate.

One of the most striking images features some llamas and a horse sitting on Zuma beach by a lifeguard’s station. The smoke and light refracted from the fires casts an uncanny red light, reminiscent of the tints used in silent films to designate infernos and later by Jean-Luc Godard as a distanciation technique. The image is emblematic of what Jennifer Peterson and Graig Uhlin conceptualize in their introduction as the Anthropocene’s spectacularly cinematic amalgam of human and nonhuman forces.

When I was finalizing my essay in spring 2018, I concluded with an allusion to the Comte de Lautréamont’s Les Chants de Maldoror, observing its shift in registers from that of an ur-Surrealist epic poem to a realist text on the increasingly strange displacements and “chance encounters” between forms of life and the production of hellscapes triggered by anthropogenic climate chaos vividly captured in Skalij’s images. I would have done well to recall that Aimé Césaire, in his Discourse on Colonialism (1950-56), already made this point, stating that from the perspective of the colonized populations, Lautréamont’s apocalyptic imagery readily availed itself to a historical materialist reading. As Kali Simmons (in the same In Focus) and Kathryn Yusoff in A Billion Black Anthropocenes or None ( 2018) each argue, the experience of world ending destruction has a history as long as that of settler colonialism and the violence of its economies of extraction and exploitation.

The founding Surrealists declared: “Transform the World. Change life.” This may be one way of summarizing the deleterious effects of the Anthropocene. But it is also the unfinished work that Surrealist and Frankfurt thinkers understood to be the task of their natural history—and ours too. It is a skillset that cinema and media scholars are particularly well suited to contribute to what remains of humanist inquiry and its vital responsibilities.