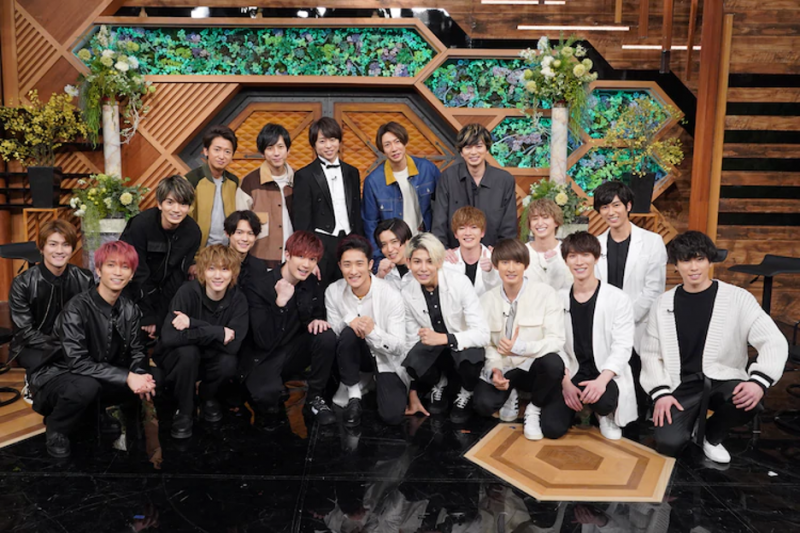 On January 22, 2020, idol groups Snow Man and SixTONES (pronounced “stones”), from the entertainment management agency Johnny’s & Associates (J&A) released their first major CDs. The groups’ many appearances on popular evening shows in the weeks leading up to their double-debut amplified public familiarity, with even non-fans tuning into these programs. Notably, the two new J&A groups appeared on senior J&A group Arashi’s weekly variety program, Arashi ni shiyagare, as a promotional effort to broadcast the idols’ star personas to a broader audience, particularly fans of Arashi. This kind of media presence in Japanese variety shows, a paratextual performance of star texts, serves to “amplify and/or clarify many of a text’s meanings and uses, establishing the role that a text and its characters play outside the boundaries of the show, in the everyday realities of viewers’ and non-viewers’ lives” (Gray 38). Arashi ni shiyagare itself functions as a paratext crafted to sell other products, especially J&A talent. Each weekly episode is tailored to introduce, reinforce, and promote guests’ public image. Mediating SixTONES and Snow Man through Arashi, whose enduring presence in the Japanese entertainment media landscape affords them familiarity and authority in mainstream popular television culture, allows viewers who have little prior knowledge of SixTONES and Snow Man to gain positive and comedic associations with the new groups in an easily digestible format.

Aired January 11, 2020, the groups’ appearance on Arashi ni shiyagare was a part of a long promotional television circuit that began in December of 2019. After briefly introducing each group, Arashi conducted a show-and-tell with Snow Man and SixTONES. Each member’s name, portrait, and a carefully titled skill or attribute was listed on a display board, and the Arashi members took turns choosing each one. For long-time fans of SixTONES and Snow Man, most of what occurred—SixTONES member Jesse’s Donald Duck impression, Snow Man members Abe Ryōhei reciting 100 digits of pi and Sakuma Daisuke performing an “acrobat-wotagei,” etc.— built upon or repeated pre-existing narratives that fans had constructed through other paratexts. For Arashi, and thus for previously uninformed viewers or new fans, the members’ personalities were summed up into easily consumable segments. As Arashi member Ohno Satoshi joked, “I can only remember them as ‘dumbbell’ or ‘rice ball,’” referring to two members’ previous gags: Snow Man member Fukazawa Tatsuya was used as a “human dumbbell” by another member, and SixTONES member Morimoto Shintarō stuffed an entire rice ball in his mouth as a “magic trick.”

In this meticulously planned studio setting, the group members are supposedly presenting to their seniors their most memorable attributes and talents, but the performances were designed to engage with two somewhat distinct audiences: pre-existing fans of the group and other viewers of the program who are learning about them, possibly for the first time. For fans of SixTONES and Snow Man, the program served to amplify and/or clarify their existing narratives. For fans of Arashi tuning in, this episode of Arashi ni shiyagare is an opportunity to see their beloved idols learn about up-and-coming groups of the same agency, as well as to hear their idols’ thoughtful guidance of these trainees on the eve of their debut. This intra-agency paratext produced an entryway for Arashi fans to these two new groups; even if they do not become fans, at the very least, Snow Man’s and SixTONES’s names will stick in association to this appearance on Arashi ni shiyagare.