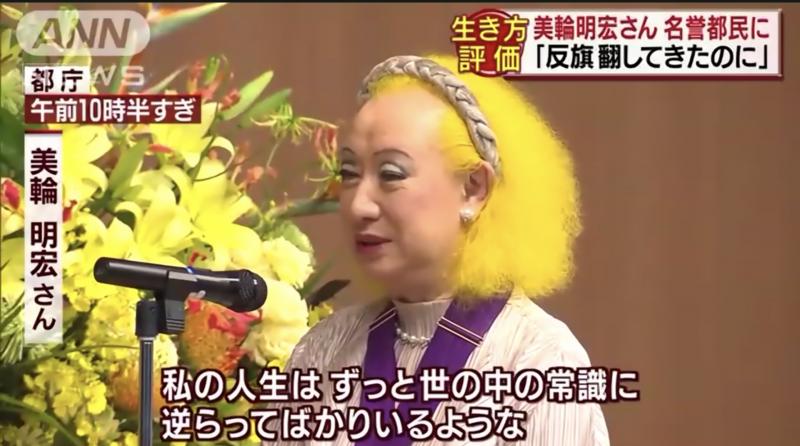 Please visit this link for the full video.
https://news.tv-asahi.co.jp/news_society/articles/000137400.html

In October 2018, Japanese celebrity Miwa Akihiro was chosen as a meiyo shimin (an honored citizen) in Tokyo for showing a way of living that transcends gender. S/he[1] commented, “My life has been against social norms, and I raised a revolt in every field. Nevertheless, [this honor] is very generous. Thank you very much.” As always, s/he appeared in a long white dress and with bright yellow hair. S/he was born in 1935 in Nagasaki, where s/he experienced the atomic bomb at the age of 10. After the war, s/he became a chanson singer and popular as a bishōnen (beautiful boy). S/he subsequently came out as gay, which was not well received. However, her/his song for poor laborers, "Yoitomake no Uta," was a great hit. Since then, s/he has been active in various fields. Today, s/he is known for performing in a variety of roles including as a singer, an actor, a voice actor, and a self-help book author. A TV show s/he hosted in the 2000s in which s/he talked about spirits and previous lives caused a commercial spiritual trend. At present, her/his various activities and transcendent potential leave a strong impression in Japanese popular culture.

In 2014 Miwa was chosen to be a narrator of Hanako to An (Hanako and Anne) an asadora (morning drama) about Muraoka Hanako, who was the first Japanese translator of Lucy Maud Montgomery’s novel Anne of Green Gables. Asadora is the more popular term for renzoku terebi shōsetsu (a TV serial) produced by NHK (Nippon hōsō kyōkai/: Japan Broadcasting Corporation). From their start in 1961, asadora have reflected the times and produced popular heroines and stars. Additionally, asadora’s narrators have significant roles. Since asadora has its root in radio drama, the narrators are responsible for conveying the story. Transparent narrators, who do not disturb the story, tend to be favored, but some narrators actively interact with the story by, for example, worrying about heroines or offering side commentary on what is going on in the story.

There is no reference to Miwa Akihiro in Hanako to An, but her/his distinctive voice immediately reminds viewers of her/his star text and presence. This certainly shapes interpretation and reception of the narrative. The director of Hanako to An says that he chose Miwa as a narrator because s/he can say the word “gokigenyō” naturally. “Gokigenyō” is a way of greeting which sounds old-fashioned now but symbolizes early 20th century school girls’ culture. Miwa’s gender fluidity can correlate with queer potential of the girls’ culture.

In Hanako to An, the protagonist Hanako learns English and befriends another girl, a relationship which the narrator, Miwa Akihiro, describes as almost like Hanako’s first love. Although such a quasi-love relationship between girls was one of the features of girls’ culture at that time and was not considered to be a homosexual relationship nor a subversive act,  Miwa Akihiro’s stand-out voice and star presence can affect interpretation of the story. Despite a shift in the narration to Hanako’s love story with her future husband, when such a narrator is played by a person with as strong a star text as Miwa's, viewers can interpret the story in a way that emphasize Hanako’s relationship with the girl. Miwa’s star text opens the asadora to a queer reading.

[1] Miwa does not have preferred pronouns. In Japanese, it is possible not to use pronouns. Therefore, Miwa does not claim her/his own pronouns. When discussed in English, it has become common to use s/he and her/his to capture Miwa's own verbal gender play.