Having worked on Peter Wollen’s archive at the British Film Institute, when I think of his legacy my thoughts tend to stray from his seminal works and veer towards the eclecticism of the margins. Much like in Peter Wollen Reads the US Press, where he makes connections between seemingly unrelated stories and reports, a capacity to draw together disparate fragments and throw them into new and unexpected relations is a key feature of Peter’s archive.[1]

So here we celebrate Peter’s eclectic output with highlights from his papers, beginning with the late 1960s/early 1970s… 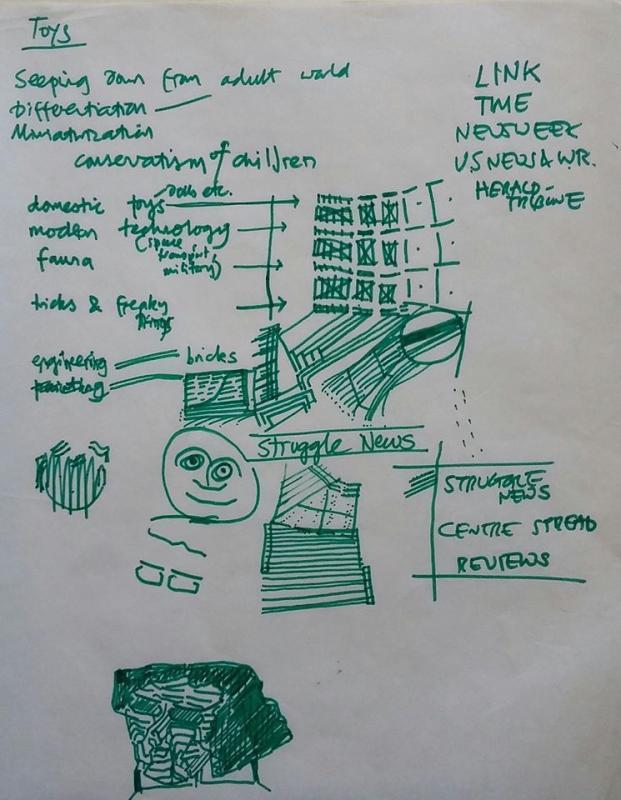 Doodles and notes on toys

In 1971 Peter published ‘Do Children Really Need Toys?’ in the short-lived weekly 7 Days, which he was involved in establishing.[2]  That same year he had been involved in the Children’s Liberation Conference, organized by the History Workshop, where again he spoke about children’s toys. Whether this page of notes and doodles relate to the article or conference it is unclear. But Peter’s interpretation and analysis of toys is of singular merit:

It is not only the difference in content which divides boys’ toys from girls’. But also the difference in scale…Boys are typically in charge of whole armies or transportation systems…in which they manipulate large numbers of microscopic personnel. They are able to indulge fantasies of autocracy and omnipotence, which are the reverse of their destiny in life.[3] 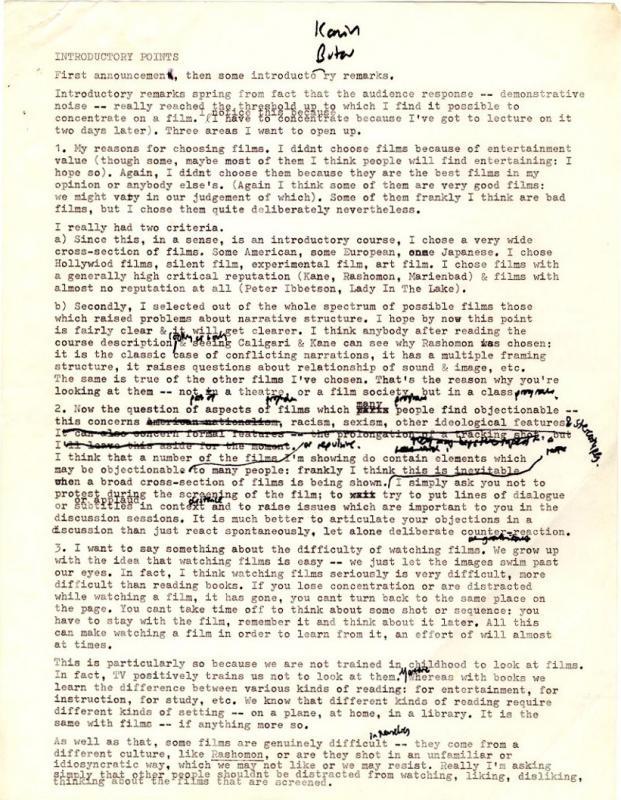 Introductory Remarks for course on film

Having begun in the Education Department of the British Film Institute in the 1960s, Peter went on to teach at the University of Essex, later moving on to UCLA, where he spent the last 17 years of his career as Professor of Film.[4] In this first page of ‘Introductory remarks’ for an early course on film Peter comments on the ‘difficulty of watching films’. He continues ‘we are not trained in childhood to look at films…Whereas with books we learn the difference between various kinds of reading: for entertainment, for instruction, for study, etc. We know that different kinds of reading require different kinds of setting – on a plane, at home, in a library.  It is the same with films – if anything more so.’ 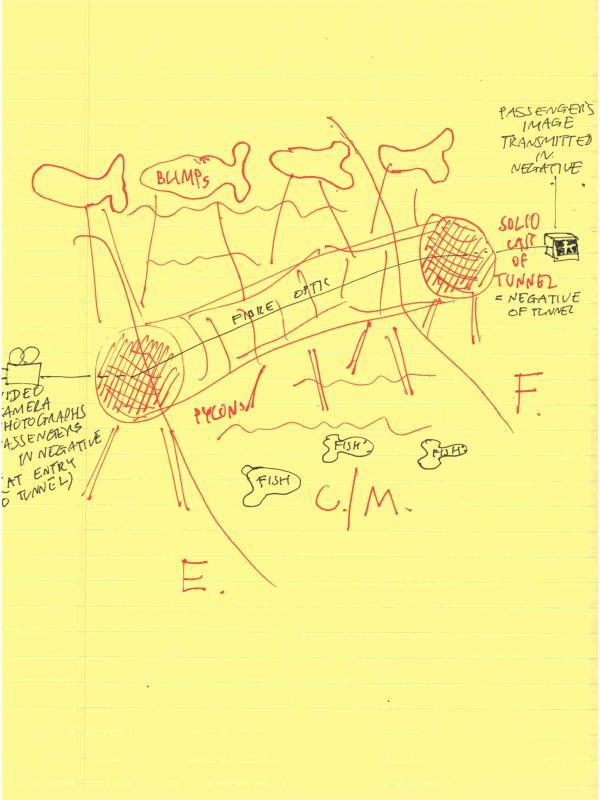 Drawing for project on the Channel Tunnel

In 1994, Peter was invited to participate in a series of events held at The Institute of Contemporary Art, New York, and The Southbank Centre, London, focusing on the newly opened Channel Tunnel. Peter had to come up with a potential artistic project, his eventual response being that the Tunnel ‘needed a film.’  This drawing shows an early conception, where the tunnel would take form as a negative of itself, in the form of a solid cast, rising on pylons out of the Channel/Manche. In the end, his proposal was much more practical and immaterial: not merely a film, the journey itself would be an immersive filmic encounter:

I proposed lining the tunnel…with giant photographic transparencies, so that the trains passed them at a rate of 24 images a second, the same speed that film frames go through the projector gate. That way, the tunnel journey itself would be transformed into an illusory cinematic experience.  The film itself would be taken by a miniature endoscopic camera swallowed by a human subject, thus recording its passage down the throat to the stomach and then on through the intestinal tract till it reached the anus. The trans-tunnel passengers would have the uncanny feeling of being swallowed up on leaving England, digested, and then excreted again half an hour later into France – or vice-versa, depending on which way they were travelling.[5] 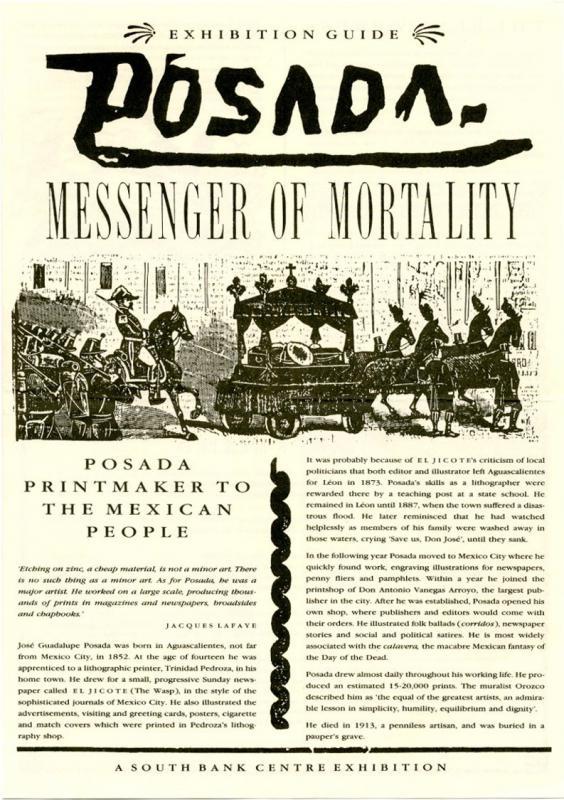 Peter curated several impressive exhibitions, such as Frida Kahlo and Tina Modotti (Whitechapel Gallery, travelling to various locations in Europe before heading to New York and finally Mexico City), and ‘On the Passage of a Few People through a Rather Brief Moment in Time: The Situationist International, 1957-1972 (Centre Pompidou, Institute of Contemporary Art, London, Institute of Contemporary Art, Boston). But it is the smaller exhibition on Mexican artist José Guadalupe Posada that demonstrates a commitment to popularize a ‘forgotten’ figure.  'Posada: Messenger of Mortality' was a touring Southbank Centre exhibition, opening at the Museum of Modern Art, Oxford in 1989. 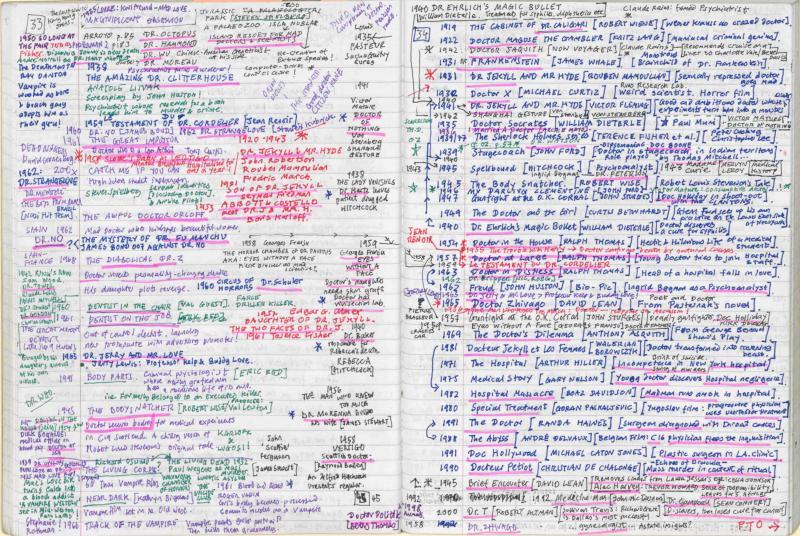 List of ‘Diabolical Doctors’ in one of Peter’s notebooks.

Peter’s notebooks span 1960s-2000s, and demonstrate the breadth of his interests. His note-taking methodology changes according to what his topic is or for what purpose, for example, when taking notes whilst watching films, Peter scribbles simple action points down the page, leaving the verso of each page blank so as not to interrupt his engagement with the screen. In other notebooks, we see list after list, at times with different colour pen so as to append as much detail possible, such as with his list of ‘Diabolical Doctors’ in film.  His lists were vital to his working method, sometimes a single list, other times a list packed out with other information, and sometimes multiple lists, contemplated and considered together – each list-writing method giving the ability to look, compare and be presented with something that may have otherwise been missed. 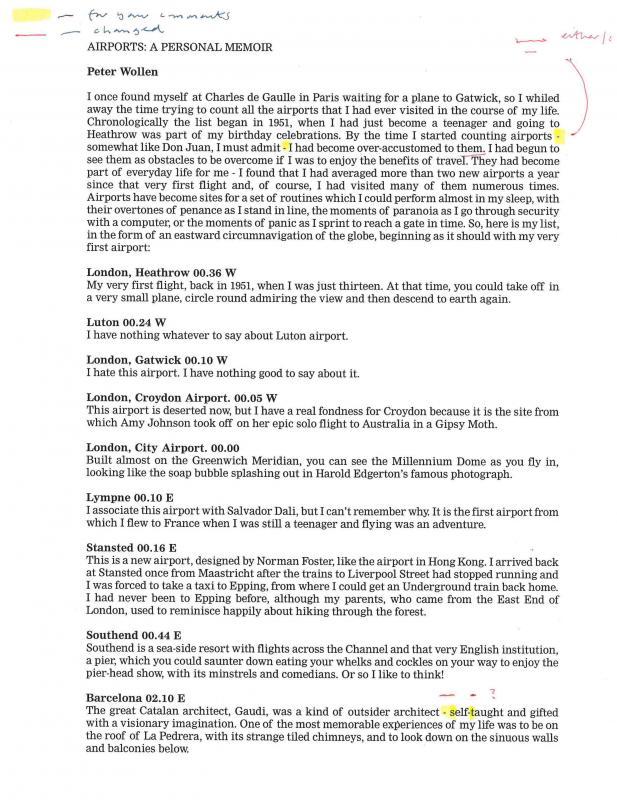 Published in Here, There and Elsewhere: Dialogues on Location and Mobility, Peter’s response to the theme is a list of all the airports he has ever passed through. In much of what Peter has written we can see autobiographical traces.  Here Peter not only lists the airports but reflects on them, be it with a memory or some other form of analysis. Even in the most subjective or throwaway forms of writing, there is still the pursuit of an idea, the desire to extrapolate a theory from it.

[1] The Peter Wollen Collection is part of Special Collections at the British Film Institute.

Special thanks to Leslie Dick for her contributions