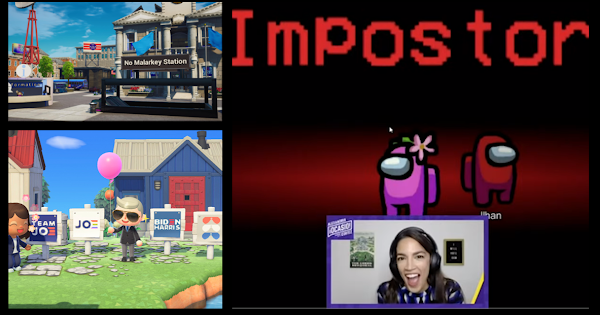 Video games in US politics have come a long way since Hilary Clinton coached voters to “Pokémon Go to the polls!” (with mixed results). On 20 October 2020 Rep. Alexandria “AOC” Ocasio-Cortez (D-NY) hunted down alien imposters before nearly five million spectators on Twitch.tv (the broadcast peaked with 435,000 views at once). To many, AOC’s record-breaking Among Us stream hit refresh on the recent—but already tired—uptick of games in/as party platforms.

The 2020 Presidential Election saw the ascent of games as virtual substitutes for physical rallies. In June 2020, whispers of a Joe Biden Fortnite rally were mocked, only to resurrect with as official Biden-Harris map in October equipped with its own “No Malarkey Station.” Likewise, “Biden Island” on Animal Crossing: New Horizons invited players to partake in their civic duty by purchasing virtual ice cream and corny Biden merch. Amongst such efforts, AOC’s Among Us felt like a more “authentic” platform:  a living space for voters, streaming celebrities, and civil servants alike to commune with each other.

Yet as Tarleton Gillespie (2010) reminds us, the idea of “platforms” does computational and rhetorical work on our imaginations. Tech companies like Google and Facebook have a vested interest in presenting themselves as flat, open meeting spaces rather than complex and corporatized products. In the decade since Gillespie’s caution, platforms have only tightened their grasp on our space. With Amazon’s purchase of livestreaming platform Twitch.tv for a neat $1 billion in 2014, they are also clutching our time.

Layered atop Twitch, a game of Among Us proffers a dream of live, unfiltered social interaction between friends when our contact is so scarce. The excitement of real-time leisure alongside celebrity politicians is tempered by grim temporal realities: On 27 November 2020, AOC returned to stream Among Us with Canada’s leftist party leader Jagmeet Singh (NDP); as the two leaders played in space, the earthbound workers of Amazon’s warehouses formed one the largest Black Friday work boycotts in history.

Twitch.tv is not a game platform. Nonetheless it brands itself as a playful meeting platform for “gamers.” If the future of our world and its leaders hinges on their ability to balance themselves atop these playful surfaces, we must ask: who is labouring so others can play amongst themselves?