This PDF document is a copy of a Word document associated with the “middle-state” of the earliest draft of Alcestis, my first published novel. It represents a re-envisioning of the novel’s structure that occurred mid-draft.

The novel follows Alcestis, wife of Admetus and granddaughter of Poseidon, to the underworld after she volunteers to die in her husband’s place. Persephone grows fascinated with Alcestis because of that choice, so different from the choices she herself was allowed, and Alcestis finds the freedom of death utterly unhinging and liberating in contrast to the hierarchical Achaean world in which she lived.

Though I was inspired by Euripides’ dramatic version of Alcestis’s story, his play does not follow her into the underworld. Instead, it focuses on the anguish of her husband Admetus and the arrival of his friend Heracles, who will rescue Alcestis from death. As I prepared to write about Alcestis’s experiences in the underworld, then, I had to invent that section of the novel entirely. I had already produced a thirteen-page single-spaced outline of the novel—I’d written a previous novel without an outline and discovered how sorely I needed one—but as I worked on a first draft, I began to see that the relationships between Persephone, Alcestis, and Hades needed to be darker and more complex. The note I actually wrote to myself in that longer outline document was this:

[THIS WILL CHANGE; FAR TOO EASY. MAKE IT WORSE. PUSH HER. SEE WHAT SHE DOES.]

I don’t like digitally highlighting documents and sometimes use all-caps to make my notes-to-self stand out visually, even though this gives them an unfortunate shouty look. But this note was also capitalized to express how thoroughly these changes might alter the book. I think structurally about writing, so when I decided to “make it worse,” I needed to come up with a structural way to support and express that greater complexity.

I’d planned for the book to have twenty-four chapters, to match The Odyssey or The Iliad’s twenty-four books. But now I thought of a separate structural organization within the chapters set in the underworld. I imagined a set of concentric circles sliced down the middle, with that center line connecting a series of paired chapters intended to resonate with one another: A B C D E F G F E D C B A (Figure 1). The central chapter, G, is the turning point of Alcestis’s time in the underworld. 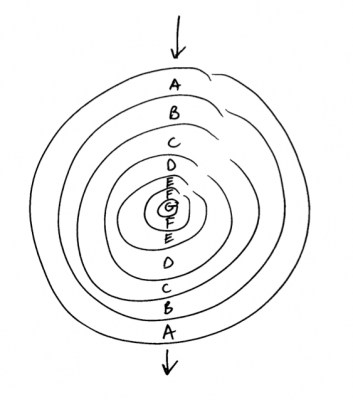 Figure 1: A faithful reproduction of the sort of fancy analog diagrams I tend to make while outlining, showing the outline structure described above

The notes for each chapter (Figure 2) are skeletal because they match up with sections of the longer, deprecated prose outline. The formatting is a bit funky; the outline was originally a Word doc, then an OpenOffice one, and to create this PDF, I opened the document in Word again. But I didn’t want to edit the outline, even to correct the formatting. The file’s last save date is from May 2006, the semester I finished revising the novel for the first time in order to submit it as my master’s thesis. 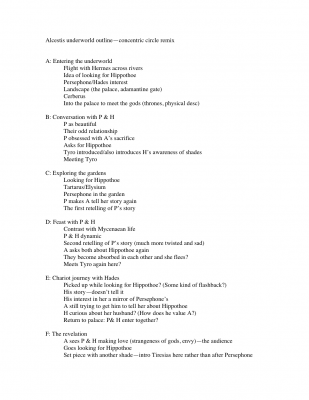 In the end, the section titled “becoming alive again,” the final meeting between Persephone and Alcestis preserved from my first outline, no longer fit. Instead I wrote more about the several days after Alcestis returns, as she tries to accustom herself to living in the world again as a king’s wife rather than a goddess’s favorite.

I didn’t expect that the structure described in this outline would be apparent in the final draft, and I’m sure most readers don’t recognize it in the slightest as they read. The book went through more changes in the pre-publication editing process as I cut and combined a few chapters. There are only twenty-two chapters in the final version and only one chariot journey with Hades. But the majority of the scenes laid out here appear in the published book, and if that book works on a structural level, it’s because of this outline and the moment it represents in my creative process.