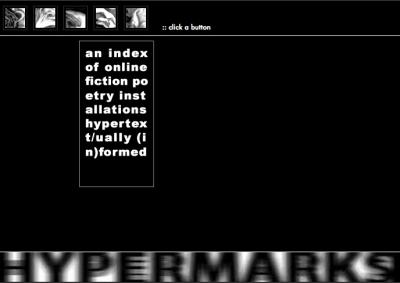 When I began working on Hypermarks: An Anthology of Electronic Literature in 1999, I had grand plans. I was fresh out of graduate school and teaching courses in “electronic literature and culture” and “hypertext fiction and poetry” for the first time and in those still-heady days of bookmarks, hot lists, and home pages, I spent countless hours constructing links pages with finely tuned subcategories. In graduate school I had cut my teeth on the bulleted list, working throughout the mid 1990s on the Voice of the Shuttle, the Romantic Chronology, and The Affirmative Action and Diversity Project, while at the same time developing my own research pages, first a catalogue of primary documents for my History of English Studies Page and then a compilation of resources for my project on Global English. When working in the British Library in 1997, I started calling up the earliest anthologies of English poetry and meticulously transcribing their table of contents, which led to a collaboration with Laura Mandell on the Anthologies and Miscellanies page that we summarily described in these terms: “we are not digital archivists per se – though we have tried to be as broadly inclusive as possible – and in the end what we have compiled is a list of texts, generally selected because they are somehow representative of critical tradition, of genre, of ‘the spirit of an age,’ of epistemological ruptures.” This then led to a collaboration with Mandell and Harriet Linkin on “The Anthologies Page” for Romantic Circles – another anthology and another list. Even in my dalliances I had veritable list mania, from the more high-minded transcription of Walter’s Benjamin’s theses on the writer’s and critic’s techniques to my whimsical list of cyberporn resources (“compiled and selected with my own censorial eye, to be read only for the sake of information”).

One of the first orders of business when I began teaching new courses, then, was the collation of links. There were some, but very few, such indices and none that I could find that articulated electronic literature both as a research-driven aesthetic practice and as an academic subject. Indeed, many of the extant indices eschewed taxonomy in favor of alphabetic order – a sure sign that a field is inchoate.

My master index was as follows, with a representative entry for each category:

It was at this point that my plans became grand. My conviction was that the literary and artistic practices named as new media writing, net.writing, hypertext fiction, and digital poetry needed curatorial direction if they were going to become “electronic literature,” which is to say an academic field in its own right. Put another way, my sense was that the mode of collection and curation particular to an anthology was essential if these literary and artistic practices were to be granted the institutional recognition that they deserved. Individual academic studies – e.g. Espen Aarseth’s Cybertext (1997) – were bringing the field into prominence but they alone were not going to be sufficient; what was required was a means by which works of electronic literature could be put to use in schools. In other words, we needed both knowledge of emergent literary genres and a means by which to facilitate their transmission. 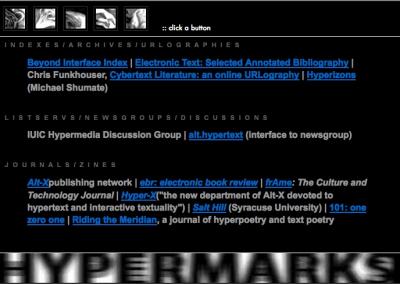 Out of all this came my Hypermarks project, which I framed both as an anthology and as “an index of online fiction, poetry, installations hypertext/ually in/formed.” It was supported by the College of Liberal Arts at the University of Minnesota, which provided grant funds to pay for the design and technical labors of a graduate research assistant, Aimee Houser, who was interested in exploring the affordances and limitations of then-current browser specifications. Through its Undergraduate Research Opportunities Program, CLA also supported the work of another student, Martin Grider, who helped with the original design on the project. Hypermarks was, and still is, an anthology of electronic literature based on my master index but streamlined with four generic categories that more closely approximate the taxonomy of a print anthology: poetry; prose; installations & exhibitions; journals & indexes. Because of the use of inline frames, popups, and a form, it required Netscape 4.7 for full functionality, but its design aesthetic looks backwards to the monochromatic palette of Olia Lialina and the blue links of Mosaic. Hypermarks remains unfinished but is still publicly visible: number 2 on a search engine results page, for those mistyping “hypermarkets.” Hypermarks made the move with me from Minnesota to UC Santa Barbara, acquired a new URL, and continues to sit on our departmental server – no doubt to the chagrin of our IT administrator – but it is dormant. I never formally declared it to be shelved; and, more to the point, its shelving can only be identified retroactively, as a consequence of the cessation of work.

Absent a notice of when a page was last updated, a farewell post, or a public announcement of termination, it is sometimes difficult to determine the precise moment a project is shelved, the moment it crosses the threshold from “in progress” to dormancy, the moment incompleteness because its actual state. Absent as well the material acts of shelving – the deletion of either local or remote files, the surrendering of server space – incompleteness is a kind of abstraction. The potential to realize the project remains; it could, in theory, be shifted from one state of work to another, revived and moved further along toward completion. Because the possibility of its future realization is ever-present, a project without a notice of termination can really only be understood to be suspended in its “middle state” at the point that one realizes in retrospect that the work has stopped, that the project is no longer on a task list and has been supplanted by other ideas and other projects. 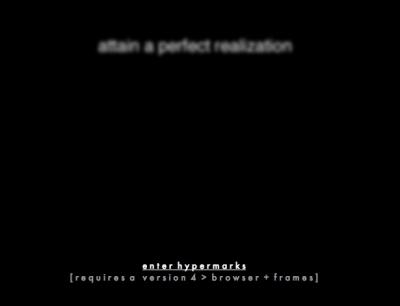 The “middle state” of Hypermarks, the limbo between conception and realization, was never articulated as such, but in-betweenness was an integral component of the project from the start. I maintained the usual theoretical skepticism about the notion of a complete collection, but Voice of the Shuttle had taught me to think carefully about the practical lifespan of archives, its utility as an academic resource becoming somewhat muted as search functionality increased. Moreover, Hypermarks instantiated my thinking about the mutable aspects of digital textuality. Building on Peter Lunenfeld’s claim that electronic textuality is in a state of “unfinish” and Michael Joyce’s claim that “electronic text can never be completed,” I was concerned in articles on the topic to show that digital textuality produced a kind of anamorphic vision, not, as for Espen Aarseth, because the anamorphic requires the reader to work to orient the text, but because it negotiates the threshold between perception and apperception. Anamorphic vision as I outlined it is not a matter of adjusting one’s spectatorial position so as to correct perspective. Rather, it is the recognition of the impossibility of bringing simultaneously into view all of the material states of the text. The splash page for Hypermarks neatly corresponds with this thinking, with the lines “hypertext does not/ and indeed cannot/ attain a perfect realization” fading to a blur. Such can one read as a wry commentary on incompleteness.

But what would it have meant for it to be complete? And how would I have recognized it as such? It cannot simply be that it would have required an official launch to bring it into being, a notice that claimed ownership of the project’s idea, because by these practical measures of publication, Hypermarks was live and even then locatable by search (many artists and authors found the site and contacted me with queries, thanks, and corrections). A citational act, one that recognizes and credits, articulates a project as an actually existing entity, irrespective of its state of completion and its future versioning. But I know Hypermarks to be frozen in its “middle state,” and, by contrast, Anthologies and Miscellanies to be complete, simply because I never folded it into another project. Anthologies and Miscellanies eventually morphed in part into the more comprehensive “The Anthologies Page,” but Hypermarks was never incorporated into another. The idea behind the project was to a certain extent fulfilled by the Electronic Literature Collections, but there was no text or file transfer out of which the latter emerged. The legacy code of Hypermarks, in other words, did not formally give rise to a different project, one that would have in its materialization relegated Hypermarks to the status of a version and thereby given it a terminus. It disappeared from my record of professional activities at some point between my reviews in 2002 and 2004, but it lives on as potential. In fact it was the recognition of its “middle state” prompted by this special issue that may very well at some point lead to its reanimation.