“Jurassic Park heralded a revolution in movies as profound as the coming of sound in 1927.”[1] This quotation is but one of a consensus of pronouncements that have canonized Jurassic Park as a milestone in Hollywood’s use of CGI, signaling a new era in film history. The emphasis on the film’s revolutionary qualities has obscured the extent to which the film’s visualizations of dinosaurs relied on more traditional methods of animation, however. What emerges from a more careful consideration of Jurassic Park’s special effects is an appreciation of the intricate mixture of traditional effects—stop-motion miniatures, large-scale animatronics—together with advancement in CGI. The general success of the film’s effects work can be attributed to its relatively sparing use of CGI and the care with which these effects were combined with time-tested methods.

So, for example, one of the film’s preproduction stories involves Spielberg’s decision to use CGI instead of Phil Tippett’s “Go motion,” a computer-aided refinement of stop-motion techniques. After watching an early CGI scene of the T. Rex chasing a herd of Gallimimus, Stephen Spielberg turned to Tippett and said, “You’re out of a job,” to which Tippett replied, “Don’t you mean extinct?” This witty bit of banter, a version of which Spielberg inserted into the film’s dialogue, exaggerates the impact of the CGI animation, however. Far from being out of a job, the stop-motion team continued to advise the CGI team, since the stop-motion animators’ craft knowledge of how to animate proved an invaluable aid to the CGI team’s development of realistic movement. This teamwork involved the creation of a new technology, the “Dinosaur Input Device,” an interface that allowed the stop-motion animators to input data for the CGI software using traditional stop-motion manual manipulation, a device that materialized the symbiosis between traditional and emergent special effects techniques (Figure 1). The stop-motion/CGI interaction is thus one example of a process of exchange between established and emergent special-effects practices. 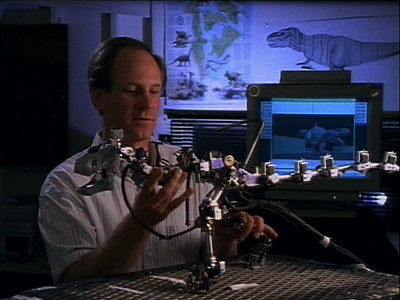 Figure 1: Dinosaur Input Device. A mechanical dinosaur is manipulated by an animator. The stop-motion data is then fed to a software program to create a realistic 3D computer model of the dinosaur.

A similar dynamic takes place in the interplay between Jurassic Park’s effects and scientific visualization practices. As work by Michelle Pierson, Eric Faden, and others has indicated, digital special effects have manifold and profound links to scientific visualization. When regarded from this perspective Jurassic Park contributes to an understanding of science fiction that emphasizes how the genre continually involves the production of something other than sheer fantasy. The film’s raptors were initially based on a falsification, a kind of wishful thinking based on narrative demands, but then a paleontological discovery made the film’s vision of the raptors seem more plausible. As Stan Winston joked, “We made it, then they discovered it.”[2] This fortuitousness, where reality catches up with and/or proves fiction, was not the only way that the film interfaced with knowledge production, however. The effects teams relied on paleontological knowledge of dinosaur anatomy, which was provided largely by science advisors, but the intuitive knowledge of the stop-motion team led to new paleontological knowledge as well. These insights came about as a result of a form of knowledge derived from the animators’ craft understanding of how dinosaurs “should” move. This material extrapolation was based in part on exercises where the animators enacted some of the dinosaur movements, using a form of introjective mimicry to guide their work. These craft practices led to a recalibration of paleontological thinking about dinosaur physiology.

Overall, then, special effects in Jurassic Park rely on overlapping stop-motion and CGI techniques, as well as deep synergies with scientific visualization processes.