"Middle-state" forms in literary collections often reveal traces of people other than the primary author. A child’s bright scribbles mixed with the pages of a manuscript draft suggest a writer whose creative process intersected with the lives of his children. An assistant's handwriting on the printout of a webpage hints at a collaborative research process. Often the person revealed is someone who has facilitated the author’s writing life, and in doing so left her own deep imprint on the middle-state media and forms of a work.

Norman Mailer’s working relationship with his long-time assistant Judith McNally provides a case in point. McNally assisted Mailer for nearly thirty years, and the Norman Mailer Papers at the Harry Ransom Center reflect their close collaboration. A proud Luddite, Mailer made it a “point of honor” not to use a computer.[1] Instead, he would handwrite or dictate a draft and give it to McNally for typing. McNally used a typewriter when she first started working for Mailer, and then transitioned to a computer in the mid- to late-1980s. When she finished a transcription, McNally would deliver the printout to Mailer, often via mail or fax. He would edit it and then return the marked-up copy to her. She would send him a clean copy that incorporated his changes, and then they would repeat the cycle.

When McNally began working for Mailer in the late 1970s, her base of operations was an office on the ground floor of his apartment building in Brooklyn. After about ten years, she decided to work from her own home instead, just two blocks away. As Mailer got older and began spending more time in Provincetown, he and McNally relied more heavily on the fax machine and mail to exchange drafts. Throughout their working relationship they also talked on the phone an average of 25 to 50 times a week. “We were communicators,” Mailer explained in an interview I conducted with him in 2007. “I’ve never had a relationship that was as intense, as narrow, as purposeful, as functional, and as removed as that.” Mailer and McNally’s way of working with each other remained essentially the same over the years, regardless of their physical proximity.[2]

The Ransom Center purchased Norman Mailer’s papers for $2.5 million in 2005. Mailer donated a portion of that sum back to the Center to support the processing and upkeep of his materials. A team of two full-time archivists, two half-time archives assistants, and one work-study student spent two years cataloging his papers, which at over 1000 boxes (Figure 1) constitute the largest single-author holding in the Center’s collection.[3] 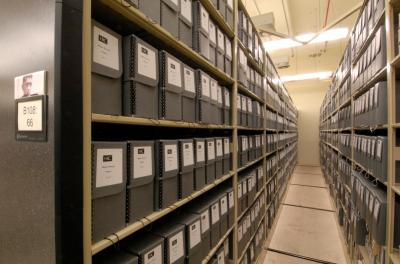 Figure 1: A view of the Mailer boxes in the stacks at the Harry Ransom Center

The materials for the “Bay of Pigs” section of Harlot's Ghost, Mailer’s 1991 novel chronicling the life of fictional CIA agent Harry Hubbard, illustrate the type of middle-state media and forms Mailer and McNally generated while producing a book. Research notes on index cards and a large, multi-colored organizational chart, both in Mailer’s distinctive scrawl, represent the book’s early stages. Because of its size, the chart has been removed to flat file storage, where many of the Center’s oversized paper items reside. 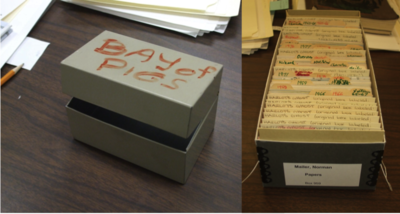 Figures 2 and 3: The contents of Mailer's index card box (left) were relocated to an archival storage box (right)

The project archivists also transferred a tan metal index card box with "Bay of Pigs" written across the top in blood-red marker (Figure 2), to the Center’s Personal Effects collection. The research note cards it contained were removed, labeled, and rehoused in an archival box alongside the bulk of Mailer’s papers (Figure 3).

The Center’s Harlot’s Ghost materials span 1985 to 1992. By the time Mailer dictated the “Bay of Pigs” section onto a series of five audio tapes in September 1989, he had transformed his initial research into a coherent plot summary. In one of the audio recordings, dated 16 September (Figure 4), Mailer clears his throat, we hear the rustle of a bag, he offers McNally some instructions, and then begins: “We pick Harry up, still in Uruguay. He didn’t get to Cuba quite so quickly as he thought, and in fact was held over until May...” The cassettes themselves, which Mailer labeled in his own hand, have been assigned numbers and stored in document boxes in the Sound Recordings section of the stacks. The Center’s Sound Recordings database (Figure 5), which researchers can access in the reading room, provides descriptive metadata about the physical media, as well as a link to digitized versions of the original audio recordings. 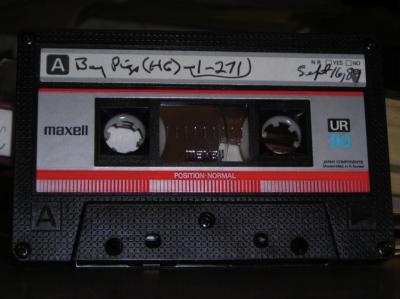 Figure 4: Audio cassette containing part of the "Bay of Pigs" section of Harlot's Ghost, as dictated by Mailer 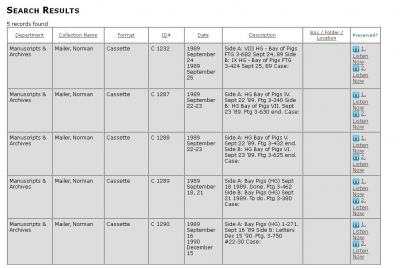 Figure 5: Digitized copies of some of Mailer's audio recordings can be accessed through the Ransom Center's Sound Recordings database

The printout of McNally’s earliest transcript for "Bay of Pigs," dated 18 September, opens with the same words Mailer speaks on the audio tape: “We pick Harry up, still in Uruguay…” McNally wrote “Harlot” or “HG” on the labels of twenty-seven 5.25-inch floppy disks (Figure 6), yet none of them contains files for the opening pages of the "Bay of Pigs” section.[4] 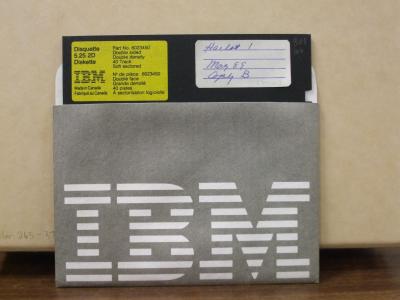 Figure 6: Some of McNally's transcripts reside on 5.25-inch floppy disks, such as the one pictured here, held at the Ransom Center

The Mailer Papers include over 400 disks and other digital media spanning approximately the mid-1980s to 2005. These items have been inventoried and recorded in the Center’s internal Electronic Records database (Figure 7) and now reside on shelves in my work space, near the machines I use to access the digital media in the Center’s collection. Eventually, all digital media will be moved to a location in the stacks. 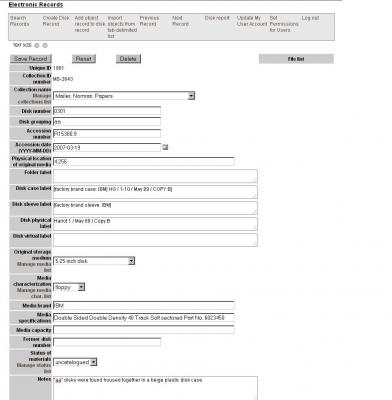 Figure 7: A database record for one of Mailer's floppy disks

Although McNally’s original disks for "Bay of Pigs" and the digital files they contained are physically absent, the audio recordings and computer printouts suggest the disks' original position in the progression of middle-state media. As the medium changed from cassette tape to digital to paper—with the “digital to paper” step reversing and repeating as McNally incorporated Mailer’s handwritten corrections into her digital version and printed out fresh copy—Mailer continued to refine his language and the story. Echoes of the 16 September recording reverberate in the opening sentence of the published “Bay of Pigs” section: "After Howard Hunt departed, I remained in Uruguay for several weeks and did not return to America until the beginning of May."[5]

Harlot’s Ghost evolved from research notes, story charts, audio tapes, drafts, and digital files into a single, published book, but the archival materials related to the book are dispersed across different departments and floors throughout the Ransom Center. The archivists who processed Mailer’s papers also created intermediary products in the course of their work. The content of some of these, such as the correspondence database we used to keep track of which letters were housed in which boxes (Figure 8), was absorbed into the finished finding aid (see: Index of Correspondents), although the original format remains invisible to the general public. Other files and documents generated during processing initially served as internal references for staff—for example, a separation sheet marking the removal of an item to oversize storage—but also became permanent markers with information that helps guide researchers who come to use the materials. The finding aid itself went through several revisions before being finalized in four different forms: a Word document stored on one of the Center’s servers, printouts filed in three different locations around the building, an html version (now retired) stored on a server and displayed online, and the xml version currently live on the Center's website. 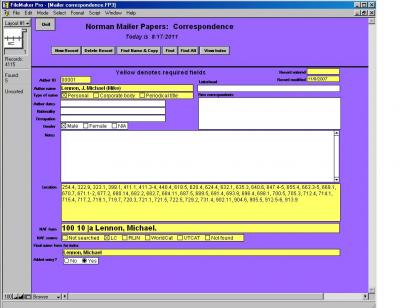 Figure 8: An electronic record in the database used by processing archivists to keep track of the location of Mailer's correspondence

Literary archives and the finding aids that describe them represent layered networks of communication and collaboration. The middle-state media and forms within these holdings provide insight into a writer's creative process, reveal people like McNally whose work significantly influenced an author's literary production and archives, and give a glimpse into the labor and interpretation that archivists undertake when organizing and describing a body of materials for use.

[2] Interview with Norman Mailer, 11 March 2007, Provincetown, MA.  I was unable to interview Judith McNally about her working methods before she died in 2006. I suspect that her internal practices for managing Mailer’s various drafts changed considerably once she began using a computer.

[3] I was part of the team that processed Mailer’s papers, and am now the Ransom Center’s digital archivist.

[4] The Ransom Center is in the process of developing its digital preservation program. Born-digital materials in the Center’s collection are not currently available to researchers.