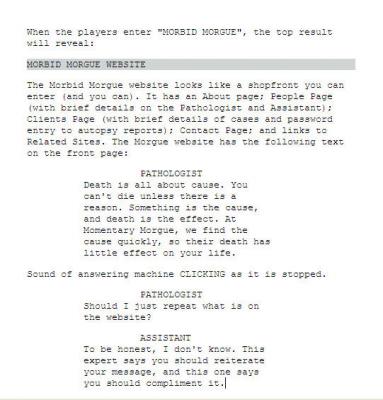 This page is a fake version of a script template I’m using for my project AUTHENTIC IN ALL CAPS. Since the project isn’t released yet, I don’t want to reveal storylines! So I’ve replaced pertinent details for now, and will replace it with the actual script after launch. Although it may look like a normal film or television script, it isn’t. This script, like the project, is the result of years of research and experimentation with documentation practices in transmedia. Transmedia (and other terms with the same meaning), describes projects that encompass a variety of distinct touch-points or media. In this project, it encompasses various fictional websites, social media, and mini-games.

AUTHENTIC IN ALL CAPS is a playful story experienced through an Internet app, using audio to guide traversal across fictional websites. Imagine putting headphones on at your computer, clicking on the app and opening up the introductory website. You hear a narrator chatting about the site you see, and you’re encouraged to take a journey across numerous fictional websites and hear and interact as the story unfold with the characters.

The use of audio to guide the player of this tale is an experiment in “game approachability”: the practice of “making games initially more fun, friendly, and accessible to players who have the desire to play, yet do not always follow through to actually playing the game” (Desurvire and Wiberg 131). Although AUTHENTIC is more a playful story than a game, the principle of approachability is just as pertinent in transmedia. The majority of people experience only a portion of dispersed works – whether they’re dispersed across the web or across distinct media platforms. As I’ve explained elsewhere, I’m drawing on audio tour design to help make the dispersed experience more approachable. But I’m also keen to explore what could be called documentation approachability.

In my work on my own projects, working on other people’s projects, and assessing projects for funding bodies and labs, I find it is often difficult to get a sense of the wholeness of the transmedia experience. I’m well aware of what flowcharts mean and do, can read documents with blog posts and tweets, and even Excel documents. I use flowcharts as a comprehension and communication tool (and have shared the early days of their development). Because of the peculiar demands of transmedia forms like alternate reality game (ARG), special deployment and management technologies have been emerging too. More recently, I’ve been contacted by a company with an interactive writing program articy:draft. The program is apparently a “professional design tool for game writers, narrative designers and transmedia writers.” Judging by colleagues who have used it already, it can be helpful tool for the conceptual mapping of multi-path narratives.

But none of these tools helps communicate the intricacies of the unfolding narrative. The continuity of the experience is in the creator’s head. So I wanted to find a way to give the readers of my script – such as team members, script advisors, potential financiers and actors – the chance to really get a feel for the flow of the entire experience. This is also difficult because of the nature of my project. On the one hand I’m drawing on conventions from radio drama, but because my players will also be seeing websites a standard radio play format is not sufficient. For an example of such a format, see this PDF instruction template from BBC Writers Room (PDF). A screenplay format is therefore more appropriate then as it can accommodate both dialogue and visual elements (see this BBC example PDF). But screenplays are designed to communicate an unfolding narrative depicted with scenes that are usually represented with linear moving action. There had to be a way to integrate both the audio and visual experience of being guided across the web, and there was.

I think the seed was sown for this special format a few years ago when I discovered a script by James Cameron and Adam Bezark (TXT) for the Terminator attraction T2: 3-D: Breaking The Screen Barrier™. As I mentioned in my PhD (Scribd page 231), the script didn’t just document the film elements, but also the “guest experience” of the pre-show: what people will see and do as they walk down the street and enter the building. I thought this was a wonderful way to include the whole experience, not just what is considered “primary” by filmmakers (the actual film). Indeed, “other” elements are often left out of documentation, and mind. There is a film script over here, a TV show script over there, and a game script is all the way other there, in that strange database format. But if I alter the script to document the critical journey of my guest, my player, then I can describe everything they see and do!

Quite simply, what I’ve done is altered all the of the scene descriptions to refer to websites. So, instead of a scene heading such as EXT. BANK BUILDING, I put in the name of the website and its URL. The sentences for scene action are adapted to describe what we see on the website and what the player can do. All of the dialogue is by default a voice-over, and so these are read through and imagined as being heard while looking at the website and doing things.

Of course, this is the ideal journey of my player…the top layer of experience. There are times other websites are referred to either by visual or audio prompt. If they aren’t part of the main audio journey, I just include an action statement with info about that possible path at the call-to-action moment. So, not all the paths through the work are represented in the linear format. But the flow of one path across many websites is. I’m finding this format helps make the representation of the experience as approachable for other readers as the audio will be for players. I’m also finding it helps me orchestrate a whole experience.

This script format isn’t replacing other forms of documentation or “middle-state” artifacts. I started with a white board, post-it notes, and index cards stuck on with Blu-Tack. I’ve created character tables, a storyworld and pitch bible, and other reference material. But I’m enjoying this format, and I think it does a good job in connecting the dots.