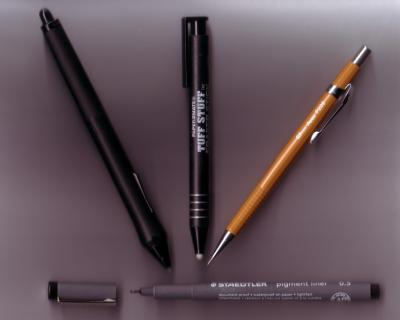 It has to start with the tools, which play a pivotal role in creating the artifacts to be discussed--two in particular. First, the eraser: central in the image and perhaps central to my process as well. Being able and willing to erase large patches of drawing has as much impact on the final image as laying the lead down with a pencil (forcing ephemerality on some stages of a work), and the tiny nub of eraser within my treasured mechanical pencil is good for about 75 seconds of work. Next, the Wacom pen, which allows my smooth transition from physical to digital and sometimes back again.

These are my standard implements of illustration, and they're what I turned to while I was producing an archives-themed webcomic (Donahue et al).  My fifth tool was a grad student's innate ability to beg: I outsourced the scripting for the majority of strips. While this saved me from doing half the work, it ultimately contributed to the [still current] long hiatus of the comic as submissions slowed down or lacked detail (Donahue). Hopefully when I’ve finished school, I’ll have the time to start it back up, as the condition which inspired the strip still exists: there is only one regular archives webcomic (Goldman, Derangement and Description), and while libraries and museums show up in many comics expos, archives rarely do. Featured here are three strips for which most of the draft materials survived. 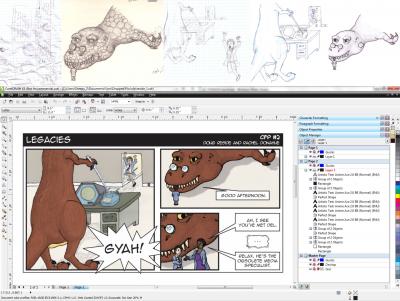 This was the first reader-submitted strip, written by my colleague Doug Reside (Donahue, CFP #2: Legacies).  Although a little worse for the wear, the first item (top left panel--see enlargement) is his script, presented in the form of a storyboard on notebook paper--the only submission to include sketches!--with suggested panel layouts and text.  While CFP was active, I rarely took a straight path from submission to final product; generally I would read an idea and let it mull until something appeared in my daily doodles.  The second image is one such doodle, drawn during a lecture on Washington, DC Filipinos (Cacas and Lott) and measuring about 1 x 1.5 inches.  The image on the top far right is one of the final physical artifacts in this process: the doodle was scanned, enlarged, and printed on a standard sheet of printer paper, then traced and inked, and scanned again with cleaned up lines reprinted to be shaded in pencil. I don't often take that final step, but at the time my graphics tablet was glitching and could only be trusted with blocky colorizing, not finer details. After the doodle there's an initial sketch on graph paper for panel one (third image from left in the series), which was traced with a blue pencil in the next image (fourth from left), and refined with my trusty 0.9mm. Missing from this progression is the final tracing in ink, using a technical pen.

Below all of these is a screenshot of the final working document for layout. All of the images are brought into CorelDRAW, where bounding boxes and speech bubbles are added. Doing the layout in such a way allows for greater flexibility with the initial drawings as I don’t have to be bothered with drawing around spaces for text and effects. 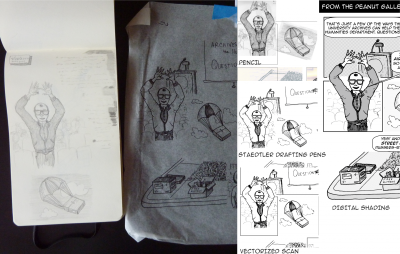 The above image is based on a script submitted by Jenny Swadosh, which came in the form of a two-page Word document styled after a screenplay (Donahue, CFP #13: From the Peanut Gallery). Scenes and characters are described in detail, with dialog separated from narrative. The final product was created a bit differently from CFP #2. The doodles were all scanned, then arranged into panels in Draw and printed for inking. The inked tracing was then rescanned, and converted into vector line-art using Draw's built-in conversion tool. This leads to extra smooth lines, which allow for quick and simple coloring with the floodfill tool in any bitmap editor (Photo-Paint, in this case). 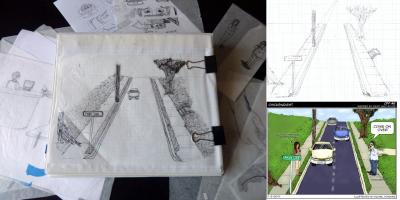 I've mentioned "tracing" several times, and want to allow another tool to temporarily intrude on this artifactual exploration: my extremely fancy and complicated "tracing table." In reality this is just a clear-pocket binder with a sketch on graph paper (top right) in the pocket, and a piece of tracing paper held in place above it with two binder clips. Some of the drafts scattered below it show traces of painter's tape, which is a reasonable stand-in for binder clips when necessary. After a series of further tracings to add in the people and two more cars, the line-art was colored with the tablet in Painter and laid out in CorelDraw as pictured above in the bottom right image.

This is a bonus image to show what an interim product for an entirely digital illustration looks like. I always start with a light blue sketch, which might be refined on a new layer in red--using the layers gives me the leeway to erase certain portions with abandon while leaving others intact. More importantly, once I've "inked" the digital image, I can just hide the sketch layers rather than erasing them as I would with a physical drawing (in cases where I don't use tracing paper--which are frequent). Painter allows for the easy creation of a custom color set and even has a mixing palette which imitates the physical process of mixing paint--but I still usually end up testing the colors on the side of the drawing, exactly as I would with physical media. Much like traditional cel-art, I use different layers for mid-tones, highlights, and shadows.