“But she straightway conceived Pallas Athene: and the father of men and gods gave her birth by way of his head on the banks of the river Trito.” (ll. 929, Hesiod’s Theogyny, trans. H.G. Evelyn-White)

Let’s play a game.
Listen. We have got a gobsmacking plum of a story stuffed with all manner of characters and curiosities — a complex mythology seamlessly woven through tiny gaps we found in the unfinished fabric of US history. It’s got war and betrayal, arson and espionage. It’s literally on fire. We need you to help us play this out.

But here’s the thing. The juicy plum is hidden away, under a crunchy rich crust of history. Yeah, history. It’s only a few hundred – okay, a couple thousand words. Oh, and we’ve hidden slices of it in various historic places, old documents, and artifacts. And you, the player, happen to be a 13-year-old eighth grader. It’s not that you don’t like to read, truly. It’s just that, if given a choice, you’d rather watch a video and text your friends – especially if the alternative has got anything to do with something that happened like a gazillion years ago and is being promoted by your teacher and librarian as a fun lab activity with visiting researchers. Think about it. You were born the same year as Google and Zelda’s Ocarina of Time. By the time you finished second grade, the world had downloaded over half a billion songs from iTunes, bought 42 million iPods, and witnessed the launch of YouTube. I mean, really: you just crossed the minimum age threshold to legally hold a Facebook account. Why would you even think to check out a history-based website – at school, no less – that required you to plough through three or four paragraphs about Benjamin Franklin, even if your teachers said it could be cool? . . . Especially if your teachers said it could be cool. 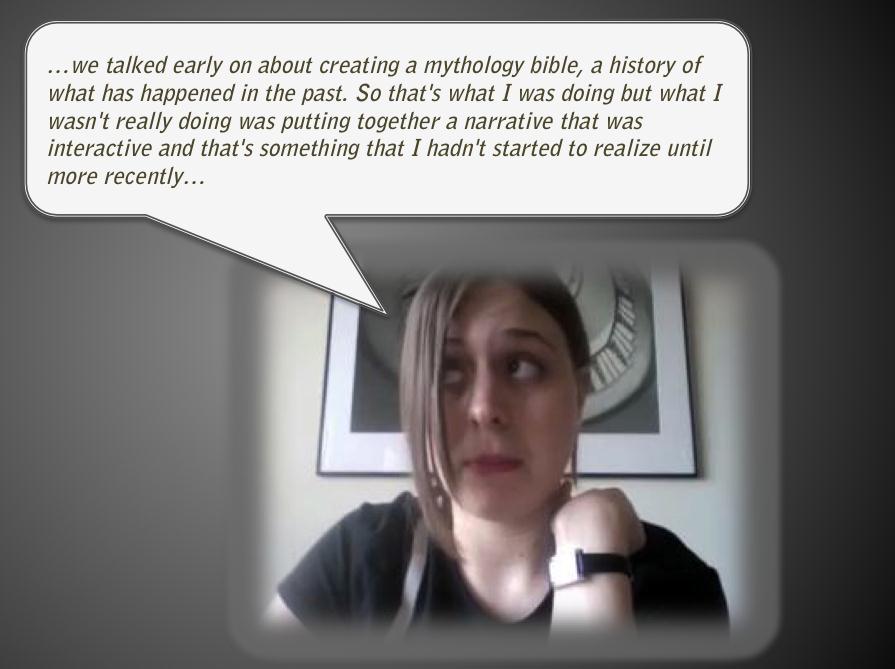 But that’s exactly what we had, just 19 days before the launch of the first installment of our Alternate Reality Game (ARG), the Arcane Gallery of Gadgetry (AGOG): a carefully crafted counterfactual history about the events leading up to the US Civil War, as well as the key roles played by the US Patent Office and the inventions housed within it. It was mid-March, and AGOG “Season 1” was slated for play during the first two weeks of April, by approximately 60 eighth graders.[fn]AGOG itself inhabits its own middle-state limbo. We've taken to calling our first iteration of the game "Season 1," with its implied promise of a "Season 2." But whether or not Season 2 ever actually transpires remains to be seen.[/fn] In early March, Ann Fraistat, AGOG’s creative writer (and soon-to-be in-game protagonist), had deftly stitched most of the game’s fictional strands into the weft of what we know today about antebellum America. To the rest of the AGOG design team, Ann had created a narrative replete with what transmedia author, J.C. Hutchins calls the “thrill, intrigue, frighten trifecta:”[fn]Michael Anderson, "An Interview with JC Hutchins: Personal Effects," ARGnet, 12 November 2008, Web < http://www.argn.com/2008/11/an_interview_with_jc_hutchins_personal_effects/ >[/fn] our mythology featured a philanthropic society torn in two by an ideological rift among its members; mysterious, recurring conflagrations and artifacts gone missing, and historical figures communicating across space and time to prevent reversals of past events that could cause potentially catastrophic changes in current events. But – how exactly might we feed its crisis and complexity to a bunch of 13 and 14 year olds? Note that during these same two weeks, our teen players would also be charged with choosing and completing training missions in navigation, scientific invention, archives, or cryptography, in order to become members of the secret society whose history we needed to convey – and whose survival they needed to care about. Arrrrggh.

AGOG is part of a larger study on the design and use of educational ARGs, and you can learn more about AGOG hither, thither, and yon (that is, if you’re not an eighth grader preoccupied with teenage topics). Here, our middle-state story centers on the creation of April G., the AGOG in-game protagonist who became the primary mechanism by which our eighth grade players ingested and interacted with the game’s narrative. The middle-state artifact that I think represents April’s story best is Ann’s sketch, captured in the spiral-bound notebook she used to record her research. In happy hindsight, based on in-class chat messages, lab observation, and a post-game survey, we can report that April was not only the primary means for meting out the storyline; she was an engaging and effective one. However, it wasn’t quite so clear to us on the Ides of March. 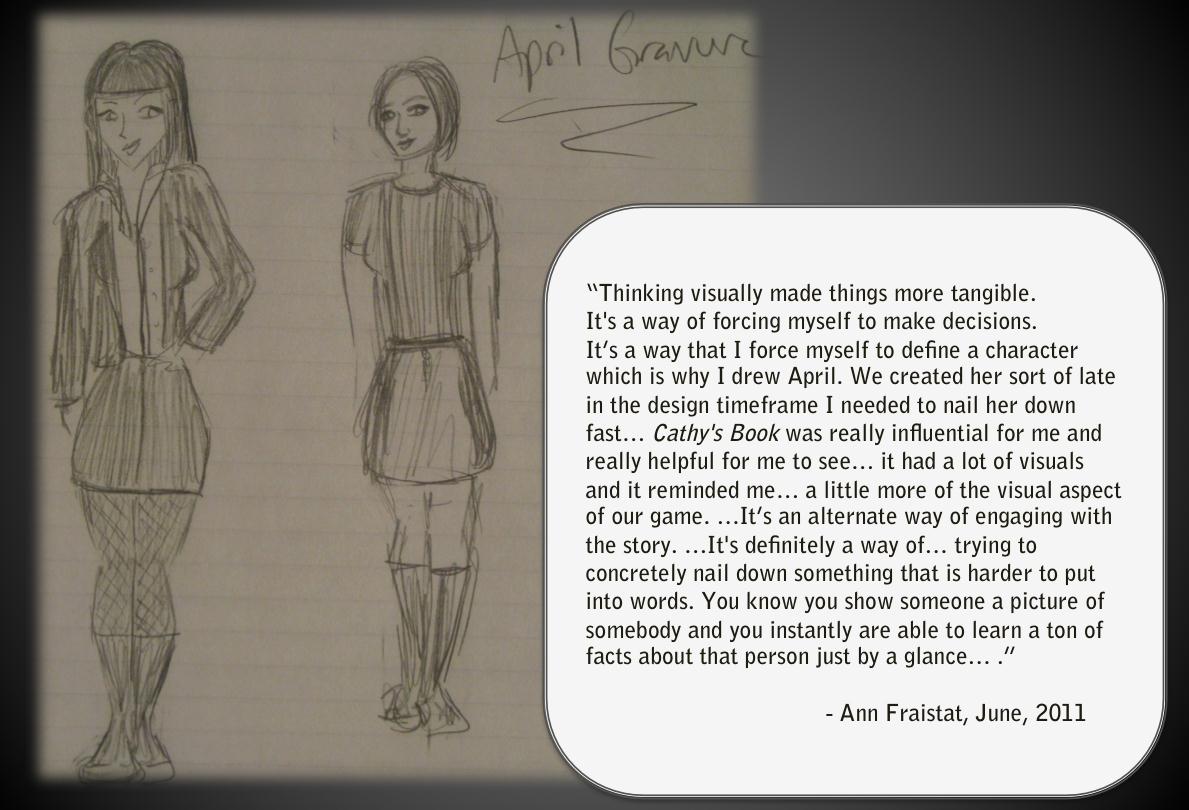 One of the wonderful things about ARG design is that it mirrors ARG play: it hums along best when powered by “bunches of brains.”[fn]Ibid.[/fn] So it was with AGOG Season 1. Any one of us might lob a question out to the group – mundane or mythic – and we’d all brainstorm a bevy of ideas until we found what felt like the right response to that question. In the same way that players follow an ARG’s narrative elements and collaborate across media, ARG designers brainstorm across multiple modes of communication.[fn]Of course, you might say this about most any collaboration. Still.[/fn] We shared ideas via email, texts, photographs, sketches, our design wiki, Google docs, Skype conversations, face-to-face meetings, and any number of mash-ups in-between.  Would it be hyperbole for me to say that over the course of designing AGOG we had a veritable orgy of ideas, all arms and legs and heads and hearts thrown together in any number or form of rendezvous? Um, no. Admittedly, a scandalous image for the nineteenth century characters who were dragged into or borne out of our happy mess – but a fetching (and earnest) one, nonetheless.

So that’s what we did. We studied Ann’s rich back-story that threatened to remain opaque to our teen players, and we brainstormed. Between March 14th and 16th, on our design wiki and via emails, we weighed the pros and cons of presenting physical “musty old tomes” to the players, or graphic novel formats, or partially complete wiki entries, and of embedding more clues or videos into training missions. We looked at past ARGs (successful and not-so) and recalled how most of them feature in-game protagonists[fn]Non-player characters, or "NPCs" in videogame parlance.[/fn] who discover their mythology in tandem with the players. JC Hutchins coined the phrase “protagonist by proxy” to describe this interactive dynamic of ARGs, in which the player is presented with the same artifacts and information – such as URLs, copies of documents, photographs, email addresses, or phone numbers – as the in-game protagonist. Players have the chance to unearth secrets that the in-game character may not have but needs, and the in-game character has the means to communicate new information to the players. We had already conceived one present-day in-game character, Colette Gravure, the used bookstore owner who discovered one of the inventions from the AGOG, naively making public a centuries-old secret. Unfortunately, Colette was in her 60s – somewhere between the school librarian and Ben Franklin in terms of cool factor and age. But what if Colette had a niece or nephew who also stumbled upon the AGOG rabbit hole site? The new in-game protagonist should not be the same age as the middle school students, but definitely not “too old.” 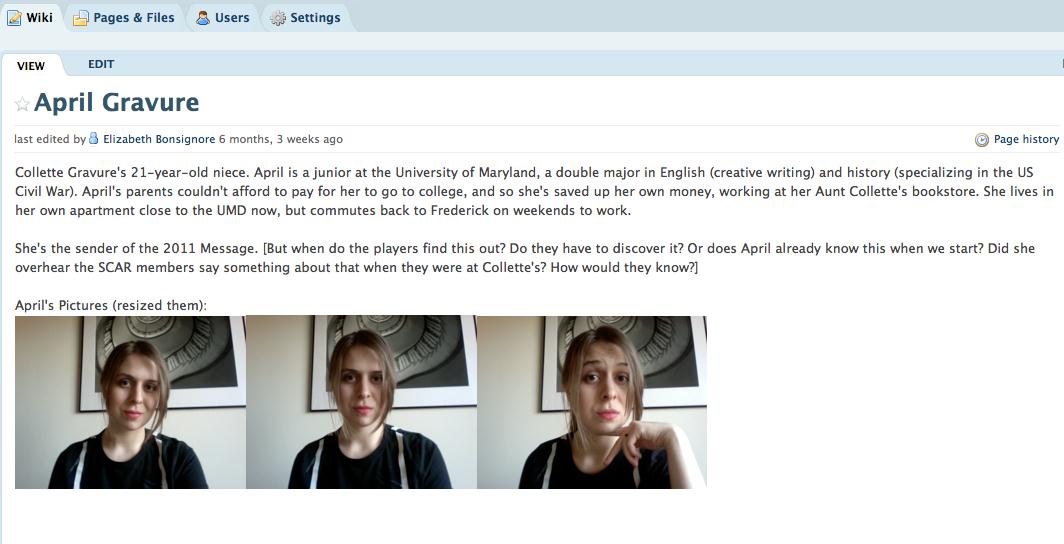 By March 19th, April Gravure – “April G.” to the players – was born. Her wiki page, describing her as “Collete Gravure’s 21-year-old niece,” was posted and profile photos uploaded. On April 4th, a video of her taking the oath as a member of JENIUS,[fn]Junto of Enlightened Naturalists and Inventors for United Society, JENIUS.[/fn] an important AGOG secret society, was available to players, and by April 5th, over 50 of them had watched her first video blog to learn who she was and where to start. April G. also enabled us to iron out an end-game mechanism that we had puzzled over: how would we decide which player got to send the climactic message back in time? The players’ new end-game goal would be to ensure that April had all that was required for her to carry out the deed.

If you examine Ann’s notebook, you will find that there is only one reference to April G. – Ann’s sketch (Figure 2). Ann also gave us copies of the notes she organized in a series of date-stamped Microsoft Word documents. In these notes, the first reference to April G. came on March 16th – and contained a half a page either derived from or relayed in our design emails that day:

That’s it. It was as if April G. had blossomed from Ann’s head like Athena burst forth from Zeus’s. Perhaps the rest of us on the team functioned in part like Metis, helping to plant the seed, or like Hephaestus, helping to draw it out. Regardless, from these deceptively simple musings, Ann developed a very real, humorous, simpatico character with whom all our teen players connected. Most wanted to help her, coax clues out of her, or simply chat with her. As April, Ann delivered the key to unlocking the story for our young players. By April 15th, less than a month after April sprang to life, Ann had crafted and delivered seven incredible video installments to the players, and had their undivided attention.

I'd like to hope that years from now, when budding transmedia designers study the “protagonist by proxy” technique, April G. might be one of the illustrious theogyny of in-game characters available for consideration. Before that, however, a complete chronicle of AGOG is forthcoming, and April G. is waiting.

(Postscript: My middle-state story is in a minority for the collection overall. Although I was a member of the design team who took part in April’s growth, this account reflects my role as the recorder of a snapshot in Ann’s creative process, not my own middle-state work. I’ve tried to recount it with as much fidelity as possible to her and our design team.)