Pre-redevelopment images of Bunker Hill reveal a neighborhood filled with grandiose houses wreathed in abundant southern California vegetation, often in spectacular stages of decay and romantic ruin. Its streetscapes are richly detailed with antiquated commercial signage and obsolete infrastructure. Arguably a posterchild for Los Angeles's constant self-reinvention, Bunker Hill's story exemplifies the indivisibility of renewal and destruction, embodying an idea that circulated in many cities with conspicuous reservoirs of poverty: that we must forcibly treat an acutely diseased organism by excising its offending parts. Reviled in its time, it now functions as a case study of how historical consciousness is fed by absence and loss. Overall its landscape is a real-life analogue for the fictional world of post-World War II film noir, and in fact the Hill was the venue for many noir location shoots.

Which brings us to this film clip: [1] 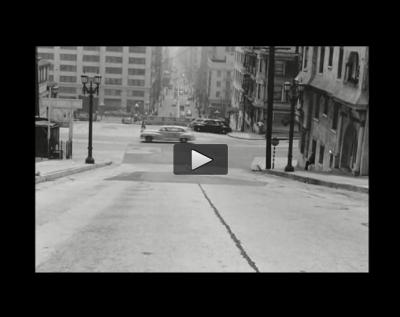 This six-minute sequence containing three separate takes is a "process plate," made to be projected on a background screen as part of a film shot taking place in a car, train or ship, or possibly behind a running person or galloping horse. You may remember seeing conversations taking place in a taxi, out of whose window we see an out-of-focus, fuzzy street going by. But the three plates on this roll are far from indistinct -- they're locked-down, rock-steady, razor-sharp long takes recording incidental American landscape scenes that might never have otherwise been captured. This particular clip comes from an unknown Columbia feature from the noir era, and is one of a number of plates shot around Los Angeles. I don't yet know for what movie this segment was shot, but the blogosphere has spoken and concluded that it was shot in 1947. One viewer even glimpsed her father, and when her sighting was called too good to be true, substantiated it with a birth certificate scan showing she was born at the address where the man in question stands.

Ever focused on economy, Hollywood studios saved much of the material they shot but didn't use in finished films. Studios and independent producers built large stock footage libraries containing generic footage (in which no name actors were seen) that they imagined might be suitable for use in future productions. Only a small percentage of this material was ever used, and most of it has never been seen. But what transpired to be useless for the studios has, without premeditation or plan, acquired retrospective value, because process plates function as deeply thick depictions of place and time. As stock footage, they possess potential to inflect new productions with accurate historical evidence, and are sometimes used this way. But I'm more interested in the potential they offer when reused as found objects by themselves.

I've remarked elsewhere on the endemic tendency to overnarrativize in current documentary.[2] It strikes me that focusing on unpublished, intermediate documents not necessarily intended for use in their existing form gives makers opportunities to escape the suite of tired tropes that risk-averse distributors tend to prefer. Home movies offer one such opportunity; process plates another. Movement in space can be an alluring means of simulating travel in time. However enigmatic or aimless, process plates imply a journey that the spectator's mind jumps to decrypt and complete. And while they effectively inventory the landscape from a fixed point of view, the viewer's eye is constantly caught between center and periphery in an urgent attempt to catch and assimilate all the detail there is to be seen before it passes. What might seem to be little more than an empty shot out an automobile window instead becomes a desperate tease; we hope to see as much as we can of a vanished place/time before it disappears.

The process plates in this collection range widely through the 1930s-1950s American landscape. They contain riveting imagery of the Los Angeles urban core; the San Fernando Valley as an agricultural zone modulated by embryonic, cheap roadside businesses on the boulevards; industrial Chicago, Philadelphia and the Bronx seen from trains; the Midwestern farm belt; views of pre-freeway New York and San Francisco; and much more yet to be discovered. Their reuse potential would seem great, but they're seldom used. In part this is due to the steep license fees their custodians charge (soon to change, as Internet Archive begins to offer a collection for free use), but I'd argue their lack of use is prompted principally by mediamakers' reluctance to let images speak for themselves. Archival images are typically presented in bits and pieces, sweetened by immersive music and sound effects or contextualized by narration so as to remove ambiguity. While we pay constant tribute to archives as preservers of history, we rarely look at original, unmediated materials. It would be unfair, however, not to point to one striking exception: the wide reception of the 1906 film A Trip Down Market Street Before the Fire.[3] Especially after its exposure on 60 Minutes, this film seems to be serving as a kind of public induction into the richness of unedited archival material, and it's a rare example of a film that's leapt from the rarefied territory of silent-film scholarship into a populist classic.

In general, though, I'd argue that the wide gap between potential and actual uses of the archival record speaks to its simultaneous urgency and irrelevancy. Archives often seem like a first-aid kit or a rusty tool, resources that we find reassuring but rarely use. More generally, the existence of archives is bolstered by a consensus that they're important (which I'd argue is faith-based), but their value isn't confirmed by use. Not only unspoken but fragile, this consensus is unlikely to survive an era of externally imposed austerity unless archives find ways to defend the specificity and importance of their endeavors. As we slide into an era of historical simultaneity, as new and old images recombine and propagate through the culture, it becomes more difficult to understand how the specificity of the historical record helps us to contextualize the present and future. Archival enclosure is no option if archives are to survive. Perhaps pushing documents like this clip back into the public sphere can remind us that invisibility is not either.

[3]Viewable and downloadable at http://www.archive.org/details/TripDownMarketStreetrBeforeTheFire.