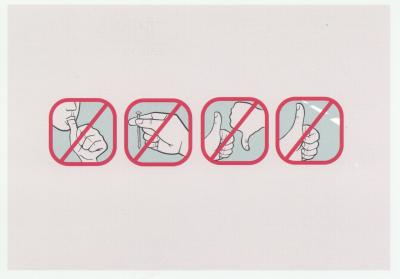 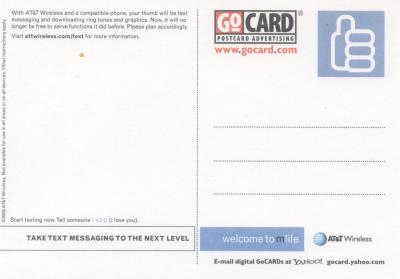 In November 2010, in the midst of a month-long self-imposed exile from Twitter, which I had been using heavily for over three years, I sent out a series of what I grandiosely called artisanal tweets. These were postcards, mailed through the U.S. Postal Service, with a 140-character (or less) handwritten message on the divided back, complete with a time-date stamp and a crudely drawn avatar. One of the finished postcards, sent to Matt Gold, a professor at CUNY, looked like this: 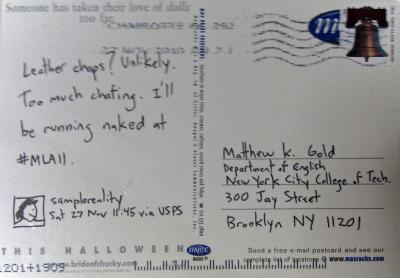 Like a regular reply on Twitter, this mailed postcard was a response to a tweet from Matt. Unlike a tweet, of course, it was not instantaneously delivered. A message that could have easily been written, sent, received, and read in the space of several seconds took nearly a week to complete this circuit. Despite the time involved, there's a rough draft quality about this postcard missing from regular Twitter posts, or any other short messaging service—Facebook updates, IM's, text messages. A definite sense of physicality resides in the creases and gel ink marks, and in the clear signs of its physical transport: barcodes, dot matrix imprints, and the First Class stamp (excessive postage for a postcard, my nod toward Jake's costly eleven-word telegram at the end of The Sun Also Rises).

This artisanal tweet was not public, or at least not public in the same way a tweet is. Sent through the U.S. Postal Service without an envelope, the postcard could easily be read by anyone who had a part in its delivery—postal employees, CUNY staff, and eventually Matt himself, who then shared the above photograph on mobypicture. But the postcard was entirely out of context for any audience, a physical manifestation of a digital message, as if it had jumped semiotic streams. A link loosened from the chain of replies that show up in a Twitter conversation. The artisanal tweet resembled Derrida's classic formulation of a postcard—“an open but illegible letter” (12)—far better than most conventional postcards.

My ultimate goal with these artisanal tweets was not only to resist momentarily Twitter and the culture of instant communication but also to parody this resistance, in a Bakhtinian sense of the word. Bakhtin imagines parody as two languages “crossed with each other, as well as two styles, two linguistic points of view, and in the final analysis two speaking subjects” (76). Parody is a double voice, an interplay between the parody and the parodied. I sought in my artisanal tweets what Bakhtin would call a “dialogized hybrid”—a “slow” tweet aware of its own futility, ambivalent towards it even.

I sent other artisanal tweets during my month away from Twitter. One reached Brian Croxall at Emory University. This tweet, which Brian photographed and shared on twitpic, was composed on the same postcard that, in its “empty” form, is my contribution (shown above) to Rough Cuts: Media and Design in Process: 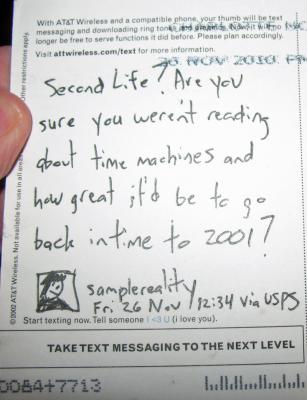 Unlike the artisanal tweet to Matt Gold, this postcard was not a coherent reply to an actual Twitter conversation. Rather, it was a non sequitur postcard, a fake reply in an imagined dialogue about the virtual world Second Life—a once overly hyped online environment now fading into obscurity.

I recently asked Matt and Brian (as well as a few other recipients of these artisanal tweets) whether they still had the postcards, now sent nearly a year ago. Nobody had them. The postcards were gone. Disposable.

So much for the aura of artisanal tweets—and yet, I couldn't have hoped for a better outcome.

With their permission, here is my query along with Matt and Brian's direct message replies:

Definitely tweeted an image of it and if I have it, it's in a deep pile. These replies are instructive—and serve as a pivot point into a closer look at the blank postcards I used for these tweets. Quite simply, my “artisanal” tweets were little more than pieces of mail. Curious pieces to be sure, but in the end as unremarkable as any other postcard. And as ephemeral as tweets themselves. All that remains are images. The physical forms have disappeared, and digital photographs supplant the originals. The photos become the evidence (“Pics or it didn't happen”), a turn of the screw that complicates the original parody these tweets were intended as.

Which brings me to the blank postcards I used for this project. These were not just any postcards. But they were also not particular postcards. I did not procure them specifically for slow tweeting. Rather, they all came from a stash of postcards I had picked up in the late nineties and early aughts in Philadelphia, in bars and restaurants and coffee shops, where display cases of these postcards hung on bathroom stalls and lobby walls. They were postcards, yes, but they were also advertisements. Matt's postcard was from 1998, the obverse showing in essence a miniature movie poster for the horror film The Bride of Chucky. Brian's postcard was slightly more recent, an AT&T ad from 2002.

I'm not sure whether the display of free postcards with ads is still prevalent, but certainly these two examples came from a lost era. The Chucky postcard came from a marketing company called M@x Racks, which surely must have failed, given the error at the web address listed on the postcard:

As for the AT&T postcard I used for my second artisanal tweet, it was a product of a joint venture between Yahoo! and GoCard. A visit to the address on the card (gocard.yahoo.com) proves to be futile:

I had had these postcards for years. They rested snug in a manila folder in a file drawer, kept safe across six moves in the course of a decade between three different states. They outlasted their sources—M@x Racks and Yahoo GoCard. Safe in my study, they were postcards from across time instead of space, residual documents of obsolete companies. And when I turned them from ads into tweets they disappeared.

The disappearance is almost poetic, considering the nature of the ad on the AT&T postcard. “Take Text Messaging to the Next Level” the card commands us, though it in no way explains why text messaging on AT&T is any different from text messaging on Sprint, T-Mobile, or Verizon. The ad is now a decade old. Before YouTube. Before the iPhone. Before Twitter. In hindsight the postcard seems both quaint and weirdly repressed. “Start texting now,” we are told. “Tell someone I <3 U (i love you).” In 2002 this would have been an especially evocative—though its meaning goes unremarked here—first text message, given the iconic role of text messaging just a year earlier on September 11th.

Out of my cache of ten-year-old postcards, I deliberately chose this AT&T one for my artisanal tweeting project. Its studied naivety about history seemed appropriate, and its subject matter—texting—echoed the origins of Twitter itself. The fact that the source of the card was defunct played into the tension between ephemerality and permanency, a tension which Twitter itself (both the writing form and the company) seems not to know what to do with. And, though I couldn't have predicted this at the time, the way the postcards themselves vanished once I sent them mirrors this theme of obsolescence and disappearance.

Derrida, Jacques. The Post Card: From Socrates to Freud and Beyond. Trans. Alan Bass. University of Chicago Press, 1987. Print.

Mark, I particularly enjoy seeing images of your media artifacts whlie knowing that Friedhelm Hillebrand, German inventor and specifier of the SMS format, considered postcards and the number of characters typically written on them as he determined how many characters should be allowed in the format. See the article in the LA Times about this, for instance.

Also, I was wondering why no one else has replied to any of these intriguing "Rough Cuts" posts - and then I tried responding myself. Even though I had just edited my article as a contributor, the process of logging on to post a comment was extremely onerous. I think next time I'll just send you a postcard ... another one ...