I am guilty of what some consider a cardinal sin in the theatre world. I direct scripts that I have written. Theatre professionals often frown upon this sort of double duty out of concern that a director will not be able to provide the outside perspective that unpolished scripts so often require.

Thus, the shift from playwright to director is a crucial part of my process when working on a show. It’s almost a ceremonial act for me, trying to create this divide. The first thing I do is to print out the script (which so far has been known to me only as intangible words on a screen). Then comes the tedious part of the ritual. I sit down with a ruler and a pencil, and meticulously, I go through the entire script and draw out three columns on the back of every single page to begin the process of script scoring.

There are many different methods for a director to approach a new script. I, however, was a double major in English (meaning, I get a perverse kick out of analyzing words for hours), so I had no trouble selecting script scoring as my method of choice. For me, script scoring involves a systematic analysis of each page of the script broken down into three categories of thought. I label them A,B, and C. (Figure 1, below).

In Column A, I place any thoughts I have relating to the big picture of the show, such as thematic observations or scene titles, which serve as one-line theses for what I envision the scenes’ role to be in the larger context of the play. Column B contains all of my notes regarding characters—their relationships, internal motivations, personal history, and speech patterns. Column C is all about atmosphere and how the scene should feel to the audience watching it. This is where I write notes about any technical elements (lights, sound, set, props, costumes) or any ideas about blocking (paths of movement or positions the actors might take over the course of the scene).

None of these notes are set in stone. Many of them never show up in the final product. I nix some of them before I even finish scoring the script. Others change later in the process as I work to negotiate my vision for the show with the individual perspectives of my designers and actors. More than anything, my notes taken while script scoring simply serve as first impressions, which become the springboard for me to start conversations with my collaborators.

The particular scene that I’ve chosen as an example of this process is the first scene of one of my plays, Romeo & Juliet: Choose Your Own Ending. Co-written with my brother, Shawn Fraistat, R&J:CYOE is a full-length show that explores the role of choice and chance in love by giving the audience a say in how the tale of Romeo and Juliet unfolds. At three different turning points in the story, the audience has the opportunity to vote on what happens next. The result is eight possible endings. Some plots end tragically, others comically; some closely resemble the original play, whereas others depart from it dramatically.  A performance runs ninety minutes on any given night, but because there are eight different paths the audience can take, the script is a monster (over 200 pages total).

I’m usually more thorough when I’m scoring the first scene of a play because I’m still trying to nail down the characters, themes, and tone for myself. In this case,

I knew the first scene would be tricky to direct because it had to set the tone for any ending ranging from Shakespeare’s original tragedy to absolutely ridiculous comedy. Thus, I seem to have taken notes as serious as, “Hate, Othering, provides a way to identify the self-->this is how Tyb [Tybalt] knows who he is”  and as silly as, “This thumb-biting needs to be stupid-looking. Wiggling fingers?” (Figures 2 and 3)

This early on into reading the play, I’m also trying to find thematic connections with the play’s technical elements. For instance, on my first script scoring page, I’ve taken some notes on the atmosphere of the scene in Column C: “Hot-->summer, noon; Maybe noon=height of hate, midnight=height of love? (Can we get different lighting looks for this?).” So, here I was imagining, “Oh, wouldn’t it be cool if there’s this perfect contrast between these fight scenes in the Verona town square (warm, yellow/orange lighting) and the balcony scene with Romeo and Juliet (cool blues)?” Then, in the margin next to this previous note, I’ve written in a bubble: “Sike, it’s early morning” (Figure 4). What happened there is that I just decided mentally that this opening scene felt like the afternoon to me, but once I got into scoring the next scene, I saw that Romeo identified the time of day as before nine in the morning. So there went that idea.

Actually, to make matters worse, when I was scoring the script, I didn’t yet have the technical specifications for the theatre at all. We later discovered that our venue had no capacity to create different lighting looks.  There was no way to achieve any lighting contrast whatsoever between the Verona town square and Juliet’s balcony.  So there really went that idea.

On the other hand, the ideas I jotted down about blocking for the characters clicked well with the actors. We kept most of those as the scene went into the rehearsal process. Many of the character notes under Column B also proved very useful in discussions with my actors.  But then, some of the notes in Column B were meant for practical application, and others not. Generally, when these notes are phrased as questions, such as “How much does Sampson want this fight?”, they are meant as a guideline for what I should be asking my actors in rehearsal (Figure 5). When I write a statement like, “Sampson has a lot more pride than Gregory,” this is an observation that I am just making for myself (Figure 5). I don’t believe that I ever bothered conveying my thoughts about that to the actor in question. It wouldn’t have been useful for him; it was just something I needed to work out for myself to understand the scene.

Ultimately, as it later turned out, working through this scene in rehearsal was the only time we would ever perform it. I was directing R&J:CYOE’s debut as a part of the Capital Fringe Festival, which places a time limit on each of our shows. After blocking and running the entire show, my production team discovered that we were running over our allotted time limit by about ten minutes. We made several internal cuts to other scenes within the script. However, we finally had to admit that was not enough and we had to cut this scene entirely from the production. In fact, for the sake of the play’s arc, Shawn and I later made the executive decision as playwrights to strike the scene permanently from the rest of the play.

For us, it took the process of writing it, script scoring it, blocking it, and then running it through in rehearsal to finally see that the tone didn’t actually fit with the rest of the play.  At least, at the end of the day, it made the “Extras” section on our DVD… 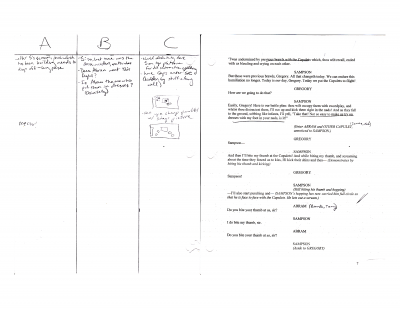 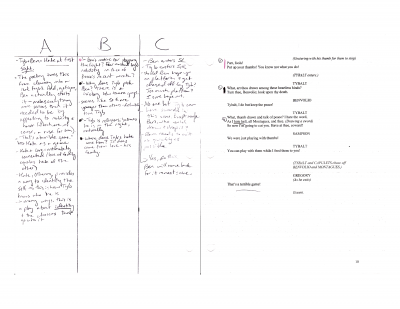 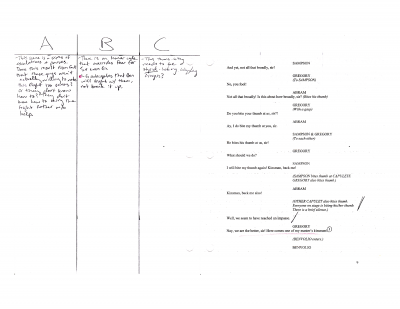 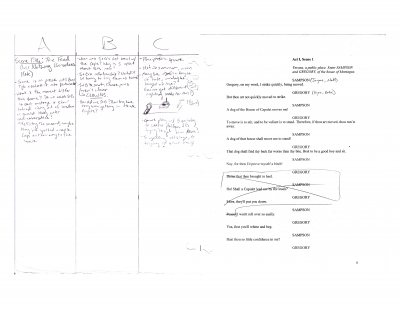 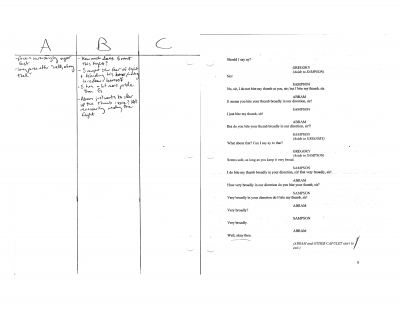