I wanted to write a poem about sexual love between partners who discover that their middle-aged bodies are taking on the dilating form of their parents.   What happens to eros when a lover looks at the beloved’s body and finds the body of the beloved’s mother or father in its place?  What is the emotional experience, the psychic charge of that recognition?

The first formal impulse was to imitate the stanza of Spenser’s ‘Mutabilie Cantos,’ with its elaborate rhyme scheme and extended final line (pentameter stretching to hexameter).  Why?  It’s difficult to say.  Above the obvious interest in Spenser’s theme, I simply wanted to try to make my own speech take that shape.  I love the tune and formal turning of the verse in Spenser’s poetry; it’s a more recent attraction for me, having disliked his sophisticated elaborations when, as an undergraduate, I first encountered them in The Fairie Queen.  Now I find them enchanting and powerful (such shifts of appreciation & comprehension are one of the delights of getting older, maybe the only one!).   I worked for a while on developing a feeling for how that stanza operates, as well as Spenser’s ideas about material change, his diction, sentences, and rhetoric.  At the same time, I was trying not to fall into Spenserian pastiche.  Some of this labor is recorded in Drafts A-1 through A-4 (Figure 1); Draft B-1 is the ‘final’ draft of that compositional process in November 2009 (Figure 2).  (This is not how I mark my drafts habitually—I’m haphazard at best, keeping in mind Hemingway’s sentiment that ‘posterity can take care of itself.’) 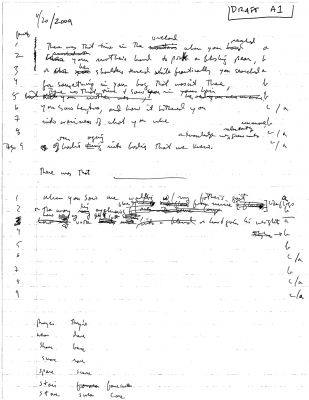 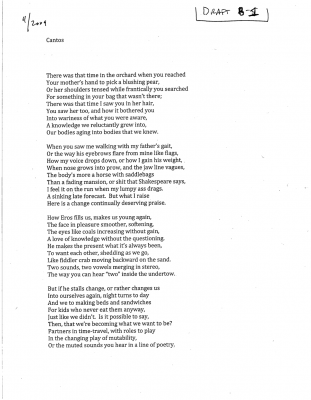 You can see in the A-Drafts how I’m sketching out the stanza scheme, which allows for some variation of end-rhyme, and playing with some of those correspondences ahead of the curve, as it were.  Playing with rhymes outside of sentence making is like tumbling in a gravity-free chamber.  The words connect, but their linking through sound is not determined by the connective tissue of an explicit syntax.  One is exploring associations and possibilities that the ear of the rational mind can’t hear.  It’s loads of fun.  That’s the adventure of writing a poem; you set out not knowing where you’re going, but having a good gait and an instinct of where to find the trailhead, and when to veer off.

Once I got into it, I was excited to find myself writing these stanzas with some facility; it was like discovering you could slalom fast down the mountain after a week in snowshoes.

But early in 2010, the poem came to sound like an unmitigated fucking disaster.  What had happened?

I had fallen into the pastiche I was trying to avoid, for one thing.  Also, the metrical contract was leading me into some awkward phrasing; I wasn’t in full control of meter, metaphor, and rhetoric, and how they need to fuse into a single element coursing through the poem.   I had distracted myself with these “crafty” problems, and willfully lost my bearing in the more difficult emotional terrain.  I had hooded myself in Spenser’s idealism, and wasn’t able, in the end, to separate the threads of idealism from the word-fabric of his stanza.  I had the terrible sinking feeling that I didn’t know what the hell I was doing.  I was avoiding precisely the problem I had set out to explore.  Ignorance is a source of poetry, Wallace Stevens reminds us.  These early drafts are not what he was talking about.

I put the poem away for about 18 months.  The most difficult thing in writing a poem is to know when you’re putting yourself on.  I had fooled myself into thinking I was doing the real work, but the fun I had had with craft (poem-making) distracted me from what Seamus Heaney calls technique, which is not synonymous with craft, but rather the poet’s stance towards language, experience, and the larger world.

Each time I picked up the poem it sounded ridiculous and looked hopeless.  Finally, I was able to hold the thing up with some objectivity, neither appraising nor dismissing, and I could hear something I wanted to save, even redeem (the way you redeem an empty bottle for a nickel).  I isolated a few sets of lines that still seemed alive and truthful.  You can find that highlighting in Draft B-2 (Figure 3).  I also still liked the poem’s gambit. 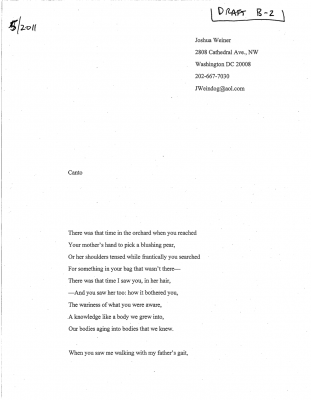 I decided to pull the poem out of the Spenserian stanza; to use a short flexible line with which I had had some satisfaction more recently in other poems; and to explore again the emotional conflict at the center of the poem, to voice some of the darker harmonies. Maybe abandoning the measure of the stanza would help me wise-up to false feelings in the poem.  You can see how I was working towards that in Drafts C-1 through C-3 (Figure 4).  Whereas the A-Drafts show me building the poem stanza by stanza in a more or less linear fashion, the C-Drafts indicate how I broke open the poem at different points to layer in additional images, figures, vocal tones, emotional shades, and turns of argument. 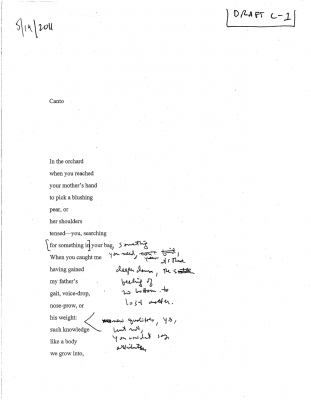 For example, one of the keys to unlocking the failed drafts came from a suggestion by another poet, a friend, who pointed me towards Erich Neumann’s monumental study of the archetype of ‘the great mother.’  When I found an image—I mean, a reproduction of a sculpture—of the Egyptian goddess Ta-Urt (parts hippo, lion, woman, crocodile, daughter of Ra, who guards the gateway to the afterlife), the terror & dread that I had avoided in the early drafts seemed to have found a symbol, or at least an adequate object.  It’s difficult to convey, but the image scared & held me at first glance, before I understood what it meant.  It took a while to figure out how to plot the appearance of that image, and the poem went through several new drafts before I found the place to break open some lines and lay in the new stuff.  I often find myself working in this manner—refining, enriching, and complicating the poem, so that its form takes on, I hope, increasingly greater and more dynamic definition.  This process involves, too, a lot of cutting away. 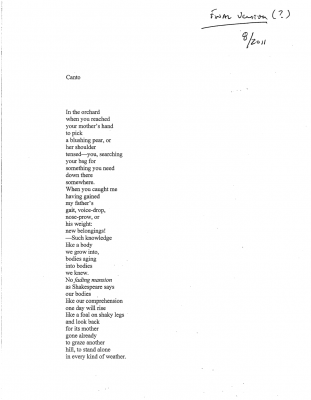 I don’t think any of this is unusual.  Whether or not the poem’s a keeper, it’s too soon to say.  One thing a good poet and a bad poet may have in common is an interesting process.  But the process of writing the poem and the experience of reading it are never the same, even when the experience of reading is directed towards the process of writing itself.   And the poet can never mistake the one for the other.  The space between the two can shrink, but it never collapses.  And that’s about the extent of it.[fn]A pdf of all the "Canto" drafts combined can be viewed here.[/fn]